Mayo hurler Keith Higgins looks ahead to the westerners' Nickey Rackard Cup final against Tyrone. Watch the full discussion on Inside The Game at 6:45pm Wednesday on Sky Sports Arena 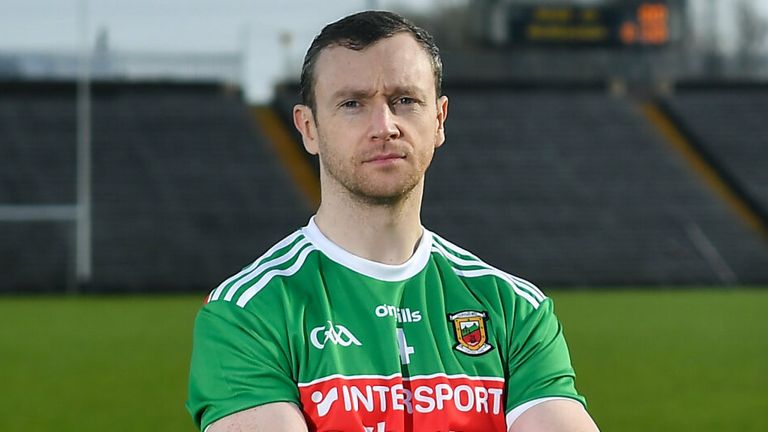 Mayo hurling star Keith Higgins feels that the lower-tier championship finals should be given a bigger billing.

The four-time football All-Star is fully concentrating on the small ball in 2021, and the westerners are through to Saturday's Nickey Rackard Cup final.

In recent years, the Lory Meagher, Nickey Rackard and Christy Ring Cup deciders have been held as triple-headers, but Higgins feels they ought to be held as curtain-raisers to big Liam MacCarthy Cup games in the All-Ireland series going forward.

"When they were brought in first, they gave a lot of teams like ourselves a realistic chance of being able to compete and win silverware," Higgins said of the lower-tier championships, speaking on Inside The Game.

"The one issue I would have with them, when they were brought in first, the big point was get the finals to Croke Park, give the players a big day out.

"The first couple of years, there was talk of them being played before All-Ireland quarter-finals and semi-finals, so there could be a bit of a crowd there. Play them before a big hurling game. That has kind of slowly drifted away, and they're played as one triple-header now.

"So while it's good to get to Croke Park, I think every player would prefer if it was played before a big hurling game, to get a bit more prestige about it, get a bit of a crowd there, get a bit of attention around it. That's one area you'd look to change.

"At the end of the day, players want to be competing in a competition they have a chance of winning. That's what these do. So in theory they're good, there's still a bit of work that can be done on them to be honest."

This weekend, the hurling clashes of Mayo-Tyrone and Cavan-Fermanagh are being held in a triple-header with the Ulster SFC final, while Derry-Offaly will be on before the Leinster SFC final.

Mayo are looking to go one further on Saturday, having lost the 2020 final to Donegal.

"When I came back in with them this year, it was fairly clear where they were looking to get back to," Higgins said.

"There would have been a lot of disappointment after last year's final loss to Donegal. Straight away, the ambition was to get back to Croke Park and get back to that final.

"They are a fairly ambitious group. It's a young enough squad. I think everyone in Mayo realises that to develop, you want to be competing at Christy Ring level and competing with those guys up there. So that was the goal from early on in the year, and fingers crossed we keep going that way on Saturday."

And there is a quick turnaround to the decider, after beating Armagh in last weekend's semi-final.

"We played our semi-final last Saturday. We only got definite confirmation on Monday that our game was definitely going ahead this weekend, because obviously, the Ulster football final is going to Croke Park as well," he added.

"In a way, having the week turnaround is good because you have less time to think about it. But at the same time, maybe two weeks would have been the ideal preparation [time] between games.

"But it's good. It's where you want to be. We're not complaining about it. It's going to be a very short week. Training [on Tuesday], a meeting then and head up on Friday. So that will be it. It's a short turnaround. But it's an exciting week and one everyone is looking forward to."

Watch the full discussion on Inside The Game at 6:45pm Wednesday on Sky Sports Arena.