Tipperary hurling facing into a transition period? Sky Sports pundits discuss end of an era in the Premier County

Following Tipperary's All-Ireland quarter-final defeat to Waterford, Jamesie O'Connor, Ollie Canning and JJ Delaney pondered if it is the end of an era in the Premier County after they won three All-Ireland titles since 2010 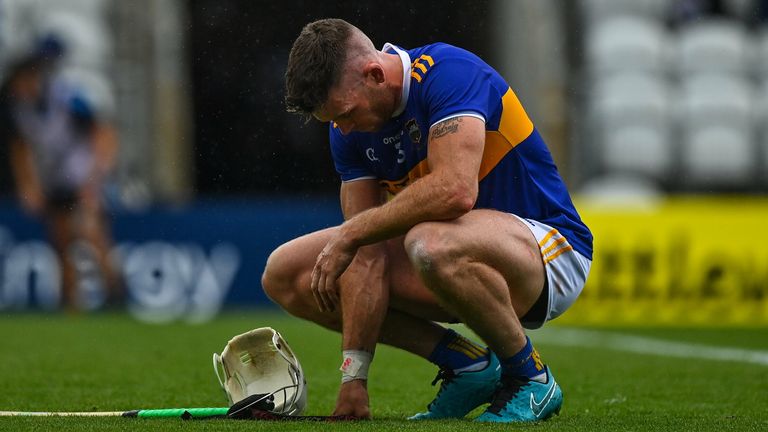 Where to now for Tipperary?

Five of the players who featured in the 2010 All-Ireland final were involved in the Premier's panel this season, as they came up short against Limerick and Waterford in recent weeks to exit the championship.

With younger talent coming through following All-Ireland titles at the U21 grade in 2018 and U20 in 2019, will the Tipperary hurlers face into a period of transition? And will Liam Sheedy opt to lead them forward?

"I think the feeling we would have got talking to Tipperary people was that this was probably going to be Liam's last year. He's a busy guy, and he'll make whatever decision is best for him and his family. Maybe he would feel, maybe he won't, that it's time to hand the reins over to somebody else," said Jamesie O'Connor.

"Whatever way you look at it, the great players that have served Liam so well over the years, Pádraic Maher, Brendan Maher, Noel McGrath, Seamus Callanan, [Patrick] Bonner Maher, those guys have played for Tipperary now, some of them, for 13 or 14 years. Time waits for no man. Arguably we may not see some of those great Tipperary players in the jersey in years to come. And Liam may feel now is the time to go.

"But he certainly got the best out of them, and they died with their boots on [against Waterford]. They could have won it, even though they were not at their best at times, and were maybe chasing it. And yet, they had the opportunities at the end that they just maybe couldn't take.

"So interesting times. We already saw Davy [Fitzgerald] stepping down in Wexford during the week. I'm sure Liam will take the required time to make whatever decision is in the best interests of both his family and Tipperary hurling."

Canning: Players will know when it's time to retire

Ollie Canning says that the individual players will be well-placed to know when it is time to walk away.

"As a player, you know before anybody else knows. Definitely, a lot of the Tipperary players are on the road a long time. A lot of those players, we've seen them back in 2010 when they won the All-Ireland that year," said the Portumna man.

"Similar to Galway. Galway and Tipp had some great battles back in 2015, '16 and '17. A lot of those players are on the road a long time. Both Tipperary and Galway are in a bit of a transition period from here on in. I think you will see some departures. As a player, you feel that on the field first. You're the first one to know.

"I hope the players take the time they need, and make a decision from there. They have all got families, etc. That needs to be considered. But I feel myself that you will see maybe a few of the Tipperary players exiting this year. But they've had great careers."

Delaney: Tough conversation to have with yourself

JJ Delaney added that everyone involved needs to engage in a period of self-reflection.

"I had standards for my own game. I felt in 2014 that I wasn't hitting those standards. I was going for a couple of balls that if they had have broken differently, my man would have got a score off them," said the Kilkenny great.

"I agree with Ollie 100 per cent with what he said. The player knows before anyone. If you're playing on a team for 8-10 years, you have credit in the bank with the manager as well. So the manager will always give you the benefit of the doubt.

"But if you know yourself, in your heart of hearts that you're not hitting the standards that you're supposed to be hitting, I think you're right to walk away, because you're there for the wrong reasons, you're taking up a place on the team and a place on the panel that you know in your heart of hearts that no matter what training you're going to do, you're not going to hit the same standards. So that's time to bow out then.

"But it's a hard decision. It's a very hard conversation to have with yourself, to admit to yourself that you can't play like you want to play."