Ryder Cup 2012 at Medinah: How the players rated 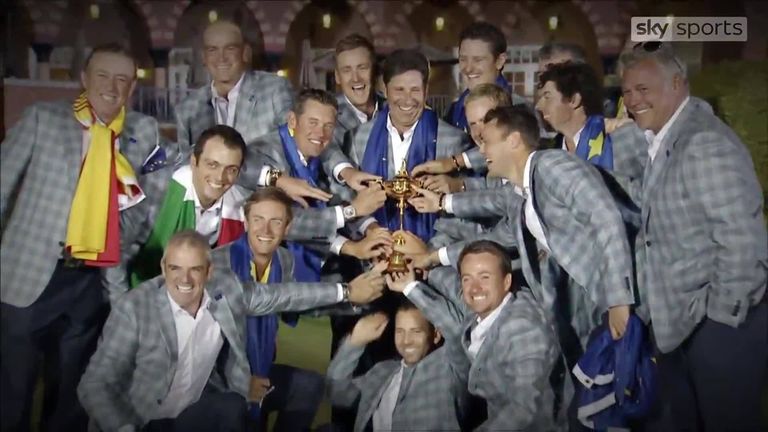 Following Europe's sensational Ryder Cup victory at Medinah, we assess how the players from both teams rated.

Nicolas Colsaerts: Simply sensational in carding eight birdies and an eagle to carry Westwood to a fourballs win over Woods and Stricker, but was unable to reproduce that form and lost his other three games. 6

Luke Donald: Produced one of the moments of the week with his tee shot to the 17th to help secure a dramatic win on Saturday evening alongside Garcia, and led from the front with victory over Watson in the opening singles match. 7

Sergio Garcia: Admitted he was not at his best in claiming one win from this three matches before the singles, but then produced a battling victory over Furyk on Sunday, winning the last two holes after never being in front since the second. 7

Peter Hanson: Out of sorts and managed just two birdies in his only appearance before the singles, a 5&4 fourballs defeat that saw him and Lawrie six down after seven. Battled hard but lost singles match to Dufner. 5

Martin Kaymer: The former world No 1 could have been knocked out of the team in the last week of qualifying after a poor run of form, and lost his only game before the singles. But the German showed nerves of steel to win the decisive point in the singles to spark delirious scenes on the 18th green. 7

Paul Lawrie: In his first appearance for 13 years, the Scot managed just four birdies in two fourball defeats, but then made four and an eagle in dispatching Snedeker 5&3 in the singles. 7

Graeme McDowell: Apparently did not expect to play twice on the opening day but was kept alongside McIlroy after their opening foursomes win. Subsequently lost next two games and was left out of Saturday fourballs before losing to Zach Johnson in singles. 5

Rory McIlroy: Played well enough to claim more than two points from four games before the singles, three of which went to the 18th. Amazingly misjudged the time zones for his singles match, arriving at the course just 10 minutes before teeing off, but never trailed in a 2&1 win. 8

Francesco Molinari: Without his brother Edoardo this time, lost both of his team games but unlucky to initially partner a seriously off-form Westwood. Halved with Woods in the final singles after the trophy had been retained. 6

Ian Poulter: The undoubted star of the first two days, winning all three of his matches and controversially rested on Friday afternoon. Birdied the last five holes in Saturday's fourballs win and beat Webb Simpson in singles by winning the last two holes. 10

Justin Rose: Played better than his record of two wins and two losses before the singles suggested and proved it with birdies on the 17th and 18th to beat Mickelson; even the American was applauding at the end. 9

Lee Westwood: Had Colsaerts to thank for his sole win from three games before the singles and looked completely out of sorts on his eighth cup appearance. Came good when it mattered with a 3&2 win over Kuchar on Sunday. 6

Keegan Bradley: Brought enormous energy and enthusiasm to his partnership with Mickelson, not to mention three points from three matches, including a record-equalling 7&6 thrashing of Westwood and Donald. Only defeat was to world No 1 McIlroy in singles. 8

Jason Dufner: Won two of his three matches before the singles and looked amazingly calm throughout the week on his debut. Also beat Hanson on Sunday in a losing cause. 7

Jim Furyk: Clearly chosen as a wild card due to his experience, but was only used twice before Sunday with one win and one defeat alongside Snedeker. Led Garcia by one with two play in singles but bogeyed the last two holes to lose. 4

Dustin Johnson: Justified his wild card with two fourballs wins with Kuchar, holing a crucial long birdie putt on the 17th hole of the win over Colsaerts and Lawrie. Also beat Colsaerts 3&2 on Sunday. 8

Zach Johnson: Won three points out of four and helped stem the European tide on Sunday with a cool win over McDowell, closing the match out with four straight pars. 8

Matt Kuchar: Won both his team games alongside Dustin Johnson, including the vital one over Colsaerts and Lawrie, but lost to a previously off-colour Westwood in the singles, never leading in the match. 6

Phil Mickelson: His previous appearance at Celtic Manor made him the American with the most defeats - 17 - in Ryder Cup history, but what a difference it made to have Bradley as a partner. Did little wrong in singles either but was beaten by an inspired birdie-birdie finish from Rose. 8

Webb Simpson: The serious Simpson relished his partnership with the laid-back Watson, the two major winners combining for two wins out of three, but lost singles match to Poulter in a crucial contest. 6

Brandt Snedeker: Cracked under the pressure in the opening match on Friday with a wild tee shot on the 18th, but gained revenge with Furyk over McIlroy and McDowell a day later. Hammered by Lawrie in singles. 5

Steve Stricker: No doubt chosen as a wild card largely to partner Woods, the veteran was off form and slumped to three defeats with the former world No 1. Made a brave par on 18th in crucial singles against Kaymer, but only after a bogey on 17th proved the difference. 3

Bubba Watson: Claimed two points out of three alongside Simpson and responsible for the new trend of encouraging fans to be as loud as possible while hitting opening tee shots. Sent off first in the singles but beaten by some high-quality golf from Donald. 6

Tiger Woods: Joined Mickelson on 17 defeats thanks to his three losses with Stricker and was left out of a session for the first time in his Ryder Cup or Presidents Cup career. Also sent out last in the singles and ended up gifting Europe overall victory by halving his match with Molinari. 3