"We have such a unified team going, and Paddy has been a major role in that because you can have brilliant teams and maybe be slightly rudderless," says Paul Casey ahead of the start of the Ryder Cup on Friday; watch all three days live on Sky Sports Ryder Cup 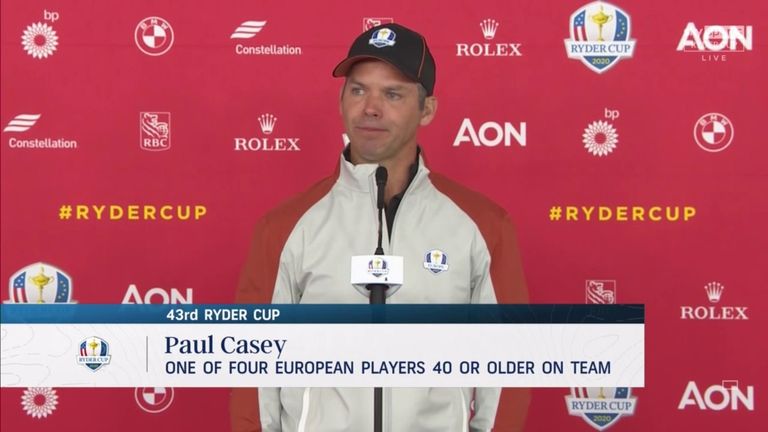 Paul Casey says Europe will go into the opening day of the Ryder Cup on Friday as a strong unified team.

The 44-year-old Englishman, who will be playing in his fifth Ryder Cup, has paid tribute to captain Padraig Harrington for his role in bonding the team ahead of the showdown with the United States at Whistling Straits.

"I think firstly the dynamic is brilliant," said Casey ahead of Friday's opening foursomes. "I don't like to compare teams and say this team is better than another team I've played on, but this team as a unified team is so strong. It's broad in its age range, the experience.

"I'm proud to be standing next to my 11 team-mates and captains and vice captains. We have such a unified team going, and Paddy has been a major role in that because you can have brilliant teams and maybe be slightly rudderless.

"But I've been utterly impressed with Paddy's captaincy. His communication skills have been top-notch and a relaxed air to everything we do but a serious approach at the same time.

"We tend not to say what goes on behind closed doors but this is my fifth [Ryder Cup]. It gets better and better every single time."

Europe's approach this week has been light-hearted at times, and Casey says they will continue trying to enjoy the week, but that does not mean they are not taking the challenge of defending the trophy seriously.

"We are going to have a great time this week no matter what," he said. "It just ramps up [on Friday]. I think maybe there are a few less smiles that are visible, that are showing, but we're still trying to have the time of our life and play amazing golf.

"The whole week we're very serious in our preparation. We are methodical, attention to detail. We try to leave no stone unturned because we know the margins are so small. You know, you can look up world rankings and all these things, but we all know, you know, it could be down to one putt or a fraction of a shot every day that's going to make the difference.

"It's serious all week and I guess we probably try to maybe deflect a little in a way, having humour. I still think it will be there come tomorrow. It's just maybe not as visible."

One European player who certainly enjoys Ryder Cup week is Ian Poulter and Casey says his fellow Englishman helps glue the team together.

"I don't know what makes him [Poulter] tick. He is unique," said Casey. "He's a big majority of the glue for this team. We don't lack energy. We don't lack glue. We'll always be a very unified team even, we have everything already. He just adds to it so much more.

"All I know is it's very, very special. It's infectious. You see some of it on the outside. I guess you see a lot of it. You don't see what we get to see in a team room and in the locker room, and this morning he just rolled through and you can just see that bounce in the step."

Casey accepts 'Mr Ryder Cup' Poulter will have a target on his back in his matches against the Americans, but he does not envy those who come up against him.

"I don't know how well all of the US guys know him, but certainly Dustin and these guys have known him for years. They love him if there's anybody they want to play and have the opportunity to beat, it's Poulter without question. He's made his mark. He's Mr Ryder Cup.

"It's that opportunity, isn't it. What an opportunity to go up against Poulter. I wouldn't want to play him. Glad he's on my team."