European players adopted the team colours of the Green Bay Packers and threw 'cheesehead' souvenirs into the crowd ahead of their Ryder Cup practice round in Wisconsin on Wednesday; watch the Ryder Cup live on Sky Sports Ryder Cup from Friday to Sunday 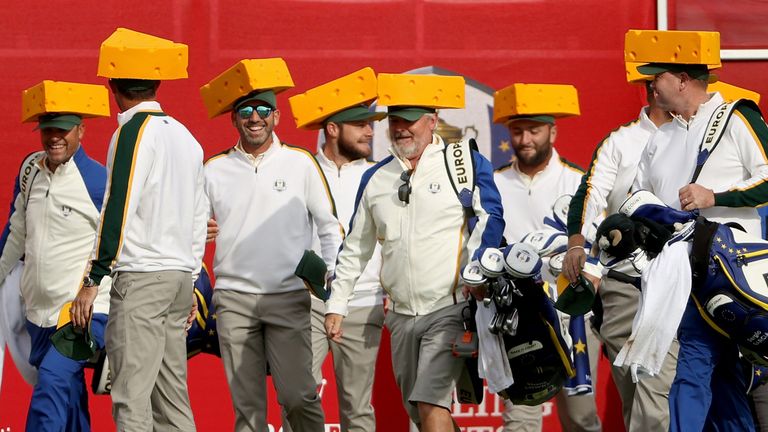 Europe's Ryder Cup players launched a charm offensive ahead of their practice rounds at Whistling Straits on Wednesday as they adopted the team colours of the Green Bay Packers and threw 'cheesehead' souvenirs into the crowd.

The European players wore predominantly white tops with green and yellow stripes in tribute to the NFL's Packers, who are based an hour north of the course in Green Bay.

They also donned foam 'cheeseheads' - the nickname for Packers fans which derives from a Dutch word used by residents of Illinois to insult people from Wisconsin - before giving them away to fans in the grandstand surrounding the first tee - although Ian Poulter did have some problems! 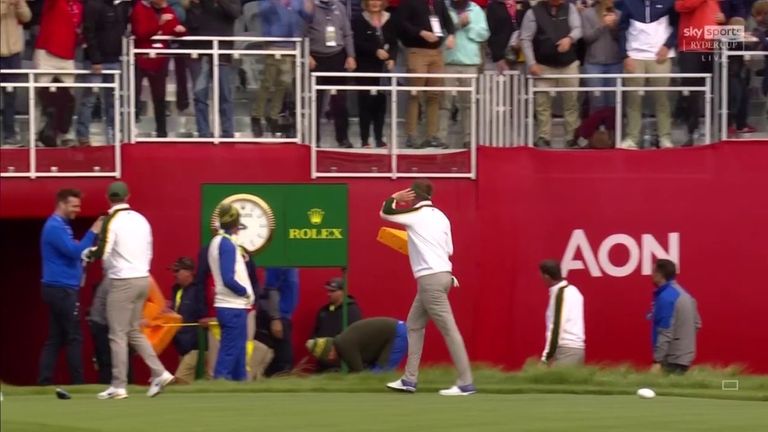 Team Europe captain Padraig Harrington explained the move was to provide some fun for the fans and to show their appreciation for the Wisconsin crowd.

"When we were doing the clothing with Loro Piana, they were talking about maybe bringing some Irish colours in for me," said Harrington.

"Look, it's lighthearted. You want it that way in practice. It's somewhat respectful of obviously the Green Bay Packers, and they were very much on board with this, so a bit of fun and we got a nice reception with it. That's kind of what you want on the practice days.

"Obviously business starts on Friday, but at the moment the players are enjoying it and having a good time of it."

The scenes brought back memories of the 2004 Ryder Cup at Oakland Hills, when Harrington was one of the players under captain Bernhard Langer who also went out of their way to get the home fans at least partially on their side, before the visitors went on to claim an emphatic victory.

Harrington added: "Everybody is out here to get on well with the crowds. There's no doubt about that. We obviously can't sign autographs this week with Covid, which is something that traditionally we would do.

Meanwhile, Harrington has promised to follow the example of predecessor Thomas Bjorn and get a tattoo if his team win at Whistling Straits this week.

Three years ago in Paris, Bjorn pledged to his players he would get a tattoo if they beat the United States, which they comfortably did by seven points.

The Dane followed through on his word three months later and Harrington has now committed to do the same.

"I am delighted that that's all they ask for - I'd have given up a lot more - so yes, I will be getting a tattoo," said the Irishman.

"If my team produce a winning week, I will be getting a tattoo to mark the occasion, and I'm very comfortable that they only asked that much of me because I would have given more.

"I think it's an unwritten rule, so it has come up in conversation. Maybe they didn't ask. Maybe I offered and they felt that was enough.

"But definitely, it's a given now in Europe: captain has to get a tattoo. And I don't have any other tattoos at this stage, so it would be a new experience for me."