Ryder Cup 2020: Ian Poulter says everything is stacked against Europe as he relishes underdogs tag

"When you have that, when you can go in as underdogs, when you can turn the tide and actually come out victorious, it means a little bit more"; watch the Ryder Cup live on Sky Sports Ryder Cup from Friday to Sunday 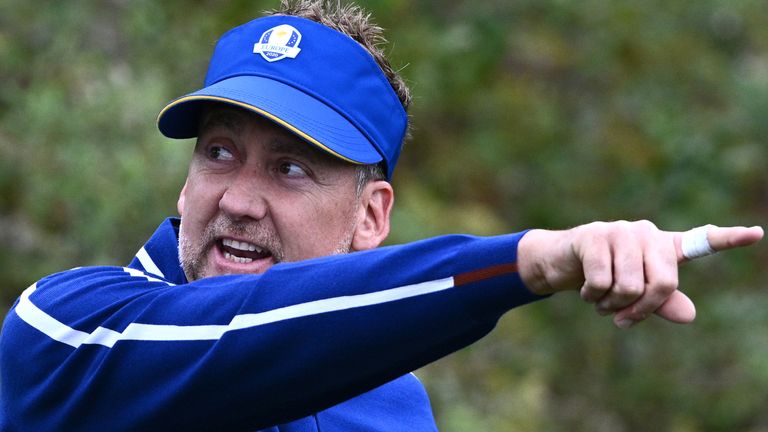 Poulter, who has lost only six of his 22 matches in his previous six Ryder Cup appearances, says it will be "extra special" if Europe can claim their first victory on US soil since Medinah in 2012.

"I guess it's a lot more difficult [to win a Ryder Cup on the road], and it doesn't happen that often, even though we've had the upper hand of that. I guess it's just more enjoyable," he said.

Poulter, a captain's pick this year by Padraig Harrington, played a key role as Europe fought back from 10-6 down to defeat the United States in 2012 in the 'Miracle of Medinah' and he is looking to draw on those experiences this week.

"I'm always looking on the highlight reel," he added. "It's pretty hard when you're pretty social media busy and there's often highlights of all the good things you've kind of done through the years, and obviously Medinah is one of those.

"It's good to get those positive vibes, a bit of confidence, and enjoy watching the celebrations that we had and the kind of golf that we played on Saturday and Sunday."

Poulter, who is viewed as Europe's talisman thanks to his excellent record and emotional reactions on the course, also stressed how important it is to keep fighting against the odds.

"You always have to believe that you have the ability to turn the match around," he said.

"Momentum has been key in every Ryder Cup I've ever played. It's all about holding that level of momentum for the longest period you possibly can, and that's hard to play against sometimes when you can see somebody has got that kind of run of form and the colour stays the way it does for a long period of time. You have to kind of break that.

"There's only been a few instances where it's been that way and you've wanted to break it, so you always have to tell yourself that it can happen, it's going to happen, and you've got to make it happen sometimes."