"It's going to be a great week. I'm looking forward to it. I feel like we've got a really strong team, and it's going to be fun," says Dustin Johnson; Collin Morikawa hoping to "turn the tide" as USA's youngest player; watch the Ryder Cup live on Sky Sports Ryder Cup from Friday to Sunday 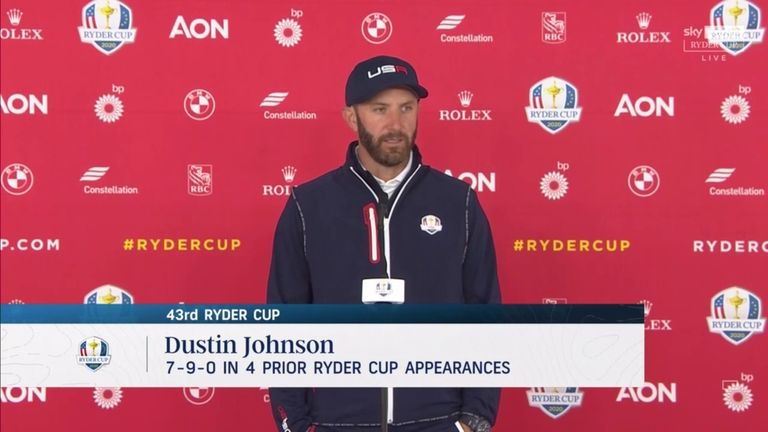 Dustin Johnson is making his fifth Ryder Cup appearance this week and the world No 2 finds himself in a surprising position as the elder statesman of the United States team.

At 37, Johnson is five years older than Tony Finau and Harris English with eight members of the American line-up still in their 20s.

Despite their inexperience, Johnson, who is happy to be the "veteran", feels there is a great "dynamic" to the home team as they bid to wrestle the trophy back from Europe at Whistling Straits.

"Obviously being the oldest by a few years, it's a little strange for me just that I've never been the oldest," he said. "I always felt like I was one of the younger guys on the team. Still feel that way, but I'm, I guess, the veteran on the team really.

"It's a role that I enjoy, but obviously with the guys on the team, all of them are very good players, so I don't really have to do much.

"It's definitely a little different with us all being fairly young. We're young, but also we still have a lot of experience I feel like. So the dynamic has been great. We all get along really well for the most part, and we've had a great time so far.

"It's going to be a great week. I'm looking forward to it. I feel like we've got a really strong team, and it's going to be fun. We're going to have to play well, though, if we want to win, but I feel like the captains and everybody has got us set up in the right way to be successful."

With six rookies in the USA team, Johnson also believes the lack of previous negative experiences at the Ryder Cup will stand the team in good stead this time.

He added: "The teams I've been on in the past, I feel like we've had tons of experience and it hasn't worked out so well, so this is kind of a different generation of golfers coming up, and we've got some really talented players, young guys that maybe don't have all the memories of losing all these Ryder Cups. Maybe this is the recipe."

As for his own recipe for success, Johnson has a straightforward plan.

"My role is to win as many matches as I can or just worry about my match that I'm playing in, help the team in any way that I can or that they need. So that's what I'm going to do," he said.

Morikawa aiming to turn the tide

One of the new faces on Team USA is Open champion Collin Morikawa and the 24-year-old, who is the youngest player on the team, is certainly keen to focus on the future rather than the past.

"We're really excited," he said. "Yeah, it is puzzling how I think we've lost a lot in the handful of years looking back at the past. But that's the past. We're here and we're about the present or hopefully what the future is going to be like.

"It's about this week, and hopefully we can turn that around and kind of turn that tide in our favour for however many years I'm able to play this. But what's happened in the past, I couldn't have had any control of that. I was whatever years old, and I think as time goes on, we learn.

"You learn and you improve, and just looking at the way the captains are going this week, I don't know exactly what it was like say 10 years ago, but they're doing everything that I would want to see in a captain.

"So it's awesome to see and be a part of that team."

Morikawa is determined to remain focused this week and says he will not let his emotions get the better of him.

"You're not going to see me as energetic as some because I want to get the job done, but yeah, there's going to be emotion," he said.

"But it's about levelling out that emotion, right, having that emotion after a made putt or one hole and then going back to the next tee shot and realising that that was the last hole. You've got to worry about this next hole, kind of this mini-match.

"Yeah, I think I'm pretty good at balancing that out, and hopefully we'll see a lot of fist pumps out there."