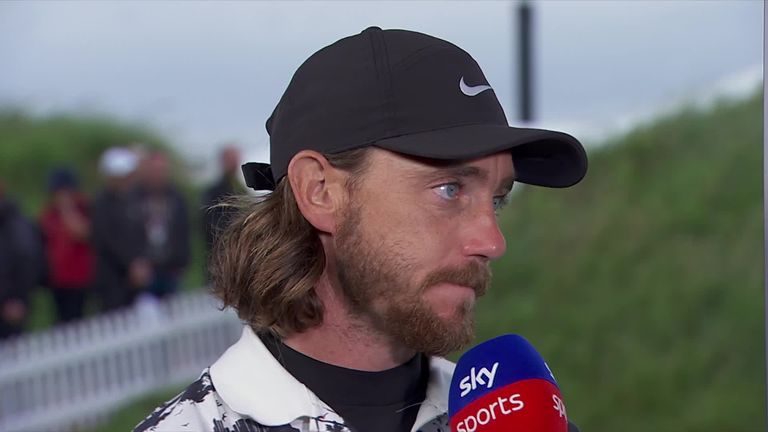 Tommy Fleetwood admitted his hopes of winning The 148th Open were ended by the "killer blow" of a double-bogey at the 14th during the final round.

Fleetwood eventually finished six shots behind Shane Lowry in second place at Royal Portrush, but that slip came at a crucial time on the back nine as the Englishman looked to apply some late pressure on his playing partner.

After hitting his second shot into a bunker on the par-four, Fleetwood's third from the sand ran down to the right of the green, from where he took three shots to get down.

Lowry could only make a bogey himself, which was the Irishman's fourth in seven holes, but he still went to the 15th tee five shots ahead and a birdie at that hole effectively secured him the Claret Jug.

"I think 14 was just a bit of a killer blow, really," said Fleetwood, who carded a three-over 74 to finish on nine under.

"I hit a really good tee shot. After struggling through the middle of the round with my game, and when the weather came in, I missed a short putt on 10. I played 11 great, 12 great, 13 I hit an okay shot, it's hard to hold that green, good chip and putt on 14. Then you end up in the bunker, and you have to push something. Like a poor second shot out of the bunker.

"Such a difficult hole if you're out of position that one, and clearly made a mess. Once that hole was over that was pretty much it. The last three or four holes were kind of a bit of a procession for Shane, and he did great."

Fleetwood, who also finished second in last year's US Open, hopes to learn some lessons from the way Lowry conducted himself during the final round.

"I think first and foremost, whatever happened today was going to be an experience and you were going to take things from it. That's the first time I've played in the last group of a major on a Sunday," added the 28-year-old.

"To lead by four at the start of the day and to keep that and literally control the tournament from the start of today until the end, that's a very, very impressive thing to do.

"And for four rounds of golf I was the second-best player in the event, which is a great achievement. You have to look at it like that

"But I'll reflect, I think I played a lot of very, very good golf this week. I think for me personally it was nice to play more like I feel like how I should play again. And of course in a major, it's my second runner-up in a major, which is great and I'm trending in the right way. I just hope my time will come eventually."