Watch the the third and final ODI between New Zealand and India, live on Sky Sports Cricket from 1.55am on Tuesday 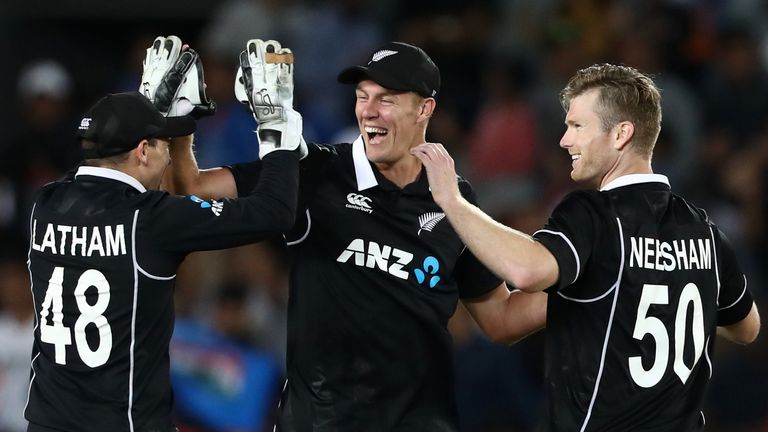 New Zealand secured a tense 22-run victory over India in their second one-day international at Eden Park on Saturday to clinch the three-match series with a game to spare.

Southee was unsure as to whether he would play the game due to a gastroenteritis outbreak that forced Mitchell Santner out and assistant coach Luke Ronchi to act as a substitute fielder, but bravely bowled 10 overs, taking two key wickets, before leaving the field.

Ravindra Jadeja (55) produced a superb rearguard after coming to the crease with India in trouble at 96-5 and he very nearly won the game in partnership with fast bowler Navdeep Saini (45) - the pair putting on 76 for the eighth wicket.

New Zealand had scored 273-8 in their innings after being put in to bat, Ross Taylor following up his century in the first match in Hamilton with 73 not out.

Martin Guptill cracked a run-a-ball 79 at the top of the order, sharing in a 93-run opening stand with Henry Nicholls (41), but the run out of Guptill in the 30th over halted New Zealand's momentum and they had slumped from 157-2 to 197-8 by the 42nd.

Taylor then combined with debutant bowler Jamieson (25no) in an unbroken 76-run ninth-wicket partnership to give the home side at least a respectable target to defend.

Shreyas Iyer, who averaged 51 in the T20 series between the two teams and scored his maiden ODI century in the first game, hit fifty, but was then caught behind for 52 to leave his team 129-6 in the 28th over.

Jadeja and Saini smashed 76 runs from 80 balls to suddenly give India a chance, seizing the momentum as the runs required reduced to 52 from the final six overs.

But, Jamieson bowled Saini in the 45th over to swing the game back New Zealand's way, Yuzvendra Chahal (10) was run out in the 48th over and then Jadeja was caught on the fence with nine balls remaining to end the game and secure a series win for the hosts.

Watch the third and final ODI between New Zealand and India, live on Sky Sports Cricket from 1.55am on Tuesday.