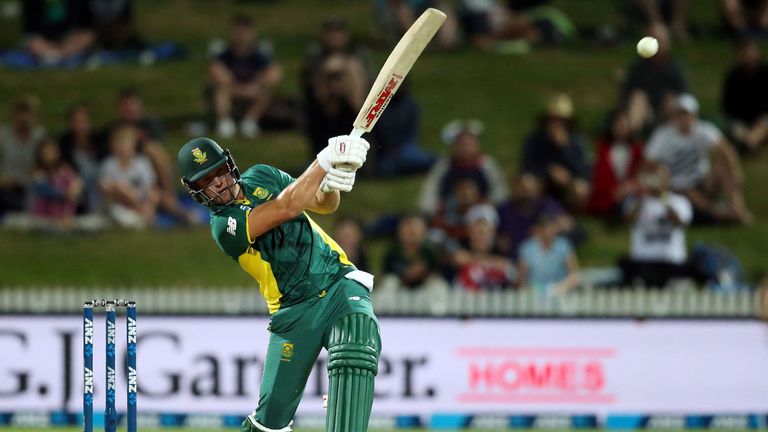 AB de Villiers needs 50 more runs to become the fastest to 9,000 in ODIs

AB de Villiers will be targeting 50 more runs to become the fastest to 9,000 in ODIs, in the second one-day international against New Zealand in Christchurch, live on Sky Sports 2 HD from 9.55pm on Tuesday.

South Africa are also looking for a record 13th ODI win in a row, having equalled their previous best of 12 - set in 2005 - with their four-wicket win in the opening game of the five-match series, on Sunday.

Set 208 to win in the rain-reduced 34-overs-a-side contest in Hamilton, the Proteas squeezed home despite a middle-order collapse where they lost five wickets for 39 runs.

"It was really tough out there," said South African skipper De Villiers after the win. "The wicket turned so much in the evening.

"From past experience this becomes a good batting track in the evening and this was far from it. I've never seen a wicket turn so much in my life."

Meanwhile, New Zealand captain Kane Williamson rued a missed opportunity for his side: "It's a bit of a shame really. We got ourselves into a good position but credit to South Africa, they adapted really well.

"We weren't perfect with the bat but we felt that five-and-a-half an over would be tough for them to get on that surface and we had enough to make life difficult."

However, players from both sides - most notably Imran Tahir, Ish Sodhi and Ross Taylor - can probably count themselves unfortunate not to have gained any interest, especially Tahir as the No 1 white-ball bowler in the world.

It was a rare wicketless ODI for Tahir two days ago, so he will be keen to return to form in Christchurch on Tuesday to show the IPL what they're missing.

Watch the second ODI between New Zealand and South Africa in Christchurch, live on Sky Sports 2 from 9.55pm on Tuesday.