Pato O'Ward's second win of the season moves him into the lead of the IndyCar championship after eight rounds; Romain Grosjean dashed to grab extinguisher after car's brakes caught fire; Watch Round Nine from Road America live on Sky Sports F1 this weekend 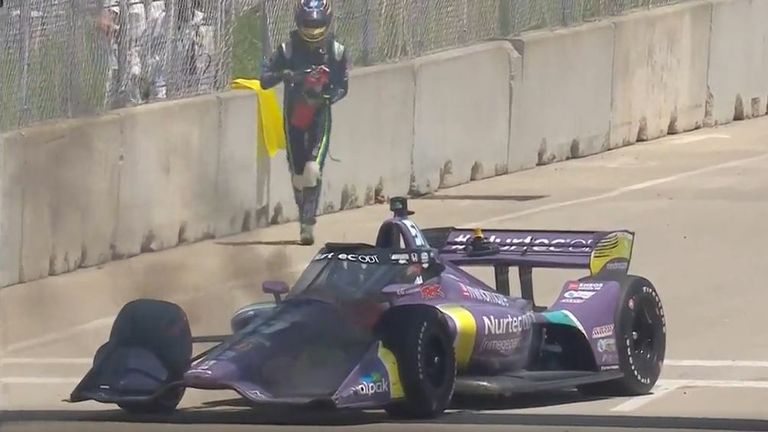 Six months on from a horrific fiery crash at F1's Bahrain GP, Romain Grosjean took matters into his own hands to tackle a fire on his car during the IndyCar Detroit Grand Prix

McLaren claimed their second win since returning full time to IndyCar at the Detroit GP, as Pato O'Ward also moved into the lead of the championship.

A day after team-mate Felix Rosenqvist had been hospitalised following a big accident in Saturday's opening race at Belle Isle, O'Ward won from 16th on the grid in swashbuckling style to become the first two-time winner in 2021 after eight races.

O'Ward, who finished third in Saturday's race, had made good progress from his qualifying position and the Arrow McLaren SP driver ran fifth for the final race restart with seven laps remaining.

He won after picking up off long-time race leader Josef Newgarden with three laps to go, the two cars making contact as they went side-by-side before the 22-year-old Mexican pulled ahead for the victory.

"In my head, the two guys that I'm fighting the championship with are in front of me, and I was not going to be pleased if we ended behind them," said O'Ward to AP, whose first win came on the Texas Motor Speedway at the start of May.

"So if I had the chance I was going to strike.

"I just had to make sure every strike wasn't like, Oh, am I going to get it? It had to be boom, definite. Once you're on the inside, it's yours. I felt like I did it very clean."

What an incredible drive, what a special win by @PatricioOWard! 👏

And real class from him to dedicate it to @FRosenqvist and Mansour Ojjeh. pic.twitter.com/uI9enQ2ppY

Felix Rosenqvist has been cleared and released by DMC Detroit Receiving Hospital. We are thankful for the excellent care he received yesterday and overnight. 🧡 pic.twitter.com/OKCI24APOj

O'Ward moves one-point clear of Alex Palou in a closely-fought championship, with reigning champion Scott Dixon shuffled back into third ahead of the Road America round this weekend.

After stopping and exiting his Dale Coyne Racing car, Grosjean, who miraculously escaped an inferno following an accident in last November's F1 Grand Prix in Bahrain, ran over to trackside marshals to get a fire extinguisher before dashing back to try and minimise the damage to his car.

IndyCar's safety team were soon on the scene and shepherded Grosjean away from the car while they put out the remaining flames.

I care about my racing cars ❤️ https://t.co/z7i1HRgz2i

@RGrosjean grabbing a fire extinguisher and running back towards his IndyCar brakes on fire. No stopping that man 👏👏

"It was a pretty eventful weekend in Detroit," said Grosjean. "I think we had two mega qualifying results with a third yesterday and fifth today.

"But I got sandwiched at the race start and I lost a fair bit of positions. Then we tried to come into the race, but I picked up a drive-through penalty and we tried to come back from there.

"Eventually we had a brake fire, and I had to extinguish a fire, but we're all good here!"

Marcus Ericsson, a former rival of Grosjean's in F1, had won on Saturday for the first win of the Swede's IndyCar career.