New Sky Sports Podcast: The One That Got Away

The new podcast taking you back to moments sporting legends still wrestle with as they recall what happened and consider what could have been...

When it comes to sporting finals, knockout matches or individual races, do you ever look back and wonder what might have happened? What the outcome could, and perhaps should, have been?

The people involved in those historic sporting moments certainly do, and Sky Sports' new podcast 'The One That Got Away' takes you closer than ever before.

Every fortnight you will be taken back to the thick of it, and discover the feelings and narratives behind the matches and moments that still wrangle with legends of the game.

In the first episode, you will hear from the former All Blacks captain Sean Fitzpatrick. He recalls the twists and turns of the 1995 Rugby World Cup Final between New Zealand and South Africa, which ultimately ended in an extra-time defeat for the All Blacks at Ellis Park. 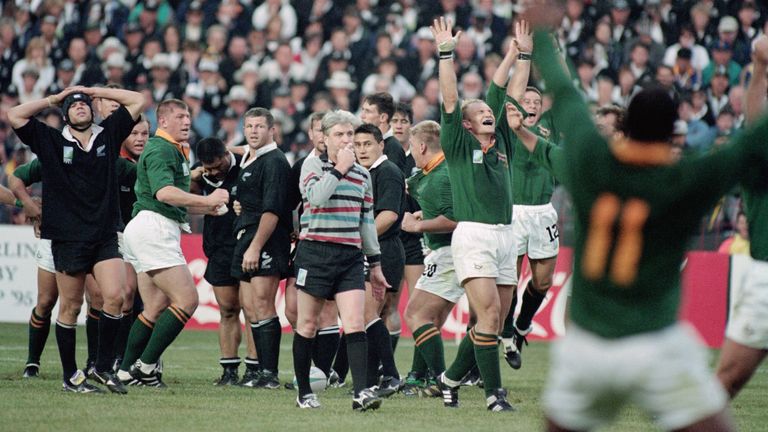 It was a really weird feeling, I must say, standing on that field with no-one knowing what to do. The jubliation of the South Africans was very evident and you just stand there and think about the opportunities [lost]. You just want to get out of there.

Nasser Hussain goes back to a memorable NatWest Series Final at Lord's. In mid-July 2002, the Home of Cricket saw India recover from 146-5 to overhaul England's tally of 325, and Hussain dives into the detail of the flashpoints from that unforgettable day.

Brad Barritt returns to the 2007 Super Rugby campaign and the Sharks' single-point loss to the Bulls after a crucial missed conversion and several chances to kick the ball out of play to end the match. You’re in a zone, but in a very bad zone. An hour and a half ago, we had the Fab Five out, and we were winning the NatWest Trophy final, and we’ve now lost again. How did this happen? Because you’re a captain that cares, you know you’ll care about that for the rest of your life...

Then, crossing codes, Eddie Hemmings comes out of retirement to join Matt Elliot and focus on the 'Wide to West' Bradford vs St Helen's match in 2000, with Saints playing their way out of their own half in the final minute to boot their opponents out of the play-offs.

Every episode will be packed with emotion and provide you an insight into the side of sport that's not always discussed - losing. The series will expand further and feature more sports in the coming weeks and months.

Episode one of The One That Got Away will be available on Tuesday evening and will feature a trip back to 1995 and New Zealand's Rugby World Cup final loss against South Africa. Click to subscribe on Spotify | Apple Podcasts | Spreaker.