On a small patch of synthetic turf at the foot of a railway embankment running alongside Markfield Park, in South Tottenham, Mickela Hall-Ramsay is holding a coaching session for some local teenagers.

Despite the intermittent rain and single-figure temperatures, the session has been eagerly anticipated. It is the spring of 2021 and first steps out of lockdown are being taken. Like all youngsters up and down the country, these participants in Haringey have suffered immensely during the pandemic. With no grassroots sport and organised activities, one of London's most densely populated boroughs has been unable to provide an outlet for its youth.

Earlier this year, Hall-Ramsay was appointed Chair of the London Youth Games, the youngest person ever to hold the role and the first to come from an ethnically diverse background.

The London Youth Games is Europe's largest youth sports festival, with over 125,000 young Londoners taking part every year across the city's 33 boroughs. It's been using the power of competitive sport to create life-changing opportunities for young Londoners since 1977 and has been a springboard for many to achieve their potential in life, including Dina Asher-Smith, Raheem Sterling, Mo Farah, Linford Christie and David Weir.

"What really excites me about joining the London Youth Games is the personal connection I have with the Games," Hall-Ramsay says.

"Everything I have achieved today is owing, in some part, to my experiences with the London Youth Games. Growing up in London, sport played a massive role in my life. It kept me active, it kept me safe, it widened my social circle and it helped build my confidence."

Hall-Ramsay competed for Haringey at the Games between 2000 and 2004, winning basketball gold medals. Latterly, she volunteered and managed Haringey's female basketball team in 2013 and 2014.

"Haringey is home, I love it here because it is where my family and friends are," the 34-year old explains.

"I know it like the back of my hand. However, I'm not oblivious to the deprivation within the borough and the crime that takes place here. For me, there's a combination of sadness and pride. Sadness from seeing many young people at risk, lives that are wasted simply because they don't have the support and mechanisms in place to flourish.

"Pride comes from walking past Spurs' stadium and seeing the sporting heritage in the borough, knowing how many amazing athletes come from the area. Sport is an important way out of hardship because it allows young people to find a passion, and it provides them with various learning tools in a safe environment."

The sudden death of her sister, who was born with Down Syndrome, along with a rise in youth crime and cuts to youth services led to Hall-Ramsay founding HR Sports Academy in 2008, at the tender age of 21. The academy is a family enterprise - brother Christian is also a director - delivering sports coaching, education and community development programmes in Haringey.

"Losing my sister did change my career path," Hall-Ramsay adds.

"When I lost my sister, although it wasn't connected, youth crime was at a high and I really wanted to provide young people with the opportunity to be around positive role models. Knowing that I'd been fortunate enough to be born without a disability, and just be alive at all, I really wanted others to realise the value of life and make the most of it."

The global pandemic led to the 2021 London Youth Games being moved to a virtual event, helping bring young Londoners together during the third lockdown.

"The Games were able to operate in an amazing way, switching quickly to online delivery," Hall-Ramsay says. 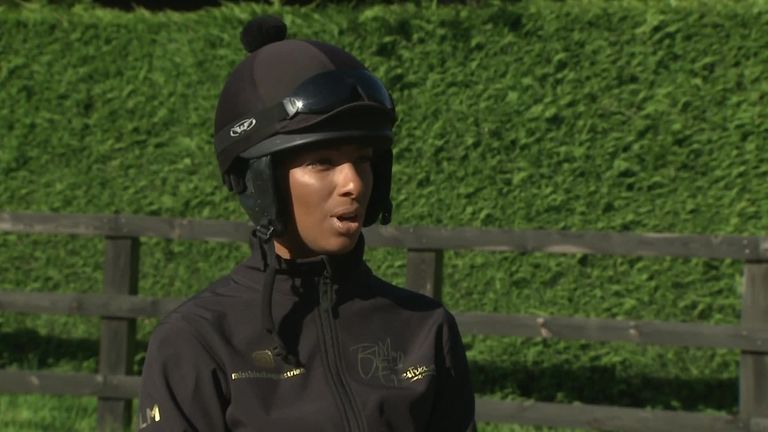 "The participation rate for those who have uniquely participated online stands at over 70,000. Being online, the Games have been able to extend their reach and can now use this momentum to draw in as many young people as possible."

Hall-Ramsay's appointment will run for a minimum of three years. She hopes the role will enable her to bring together those who have been marginalised.

"I believe there has been an absence of role models, especially for those who have been under-represented," she insists.

"I want to empower women and girls to be involved in sport and in leadership roles. I also believe that those who come from deprived backgrounds will see this as an avenue they can take to develop themselves. Young people from all different backgrounds, races and ethnicities should be able to see themselves in leadership positions. "I really hope my appointment will allow people to see I am an authentic voice who is there to speak for them and represent them. The disengagement young people have with authority comes with relatability. If you are unable to relate to somebody, you are not going to want to be around them or listen to them.

"It's the way you approach young people, as well. If you're not able to approach in a manner where you are showing respect in order to gain it back, it's going to make the work you do with them extremely difficult."

With the Virtual Inclusive Games concluding in April, Hall-Ramsay is now turning her attention to the future, with the aim of raising awareness and participation levels in the arena she gained so many life skills competing in.

"Being appointed as the youngest Chair is an amazing feeling," she concludes. "And I want to make the Games as accessible to as many young Londoners as possible."