The NBA playoff action continues on Sunday as the Atlanta Hawks host the New York Knicks from 6pm on Sky Sports Arena, and then enjoy Phoenix Suns @ Los Angeles Lakers live from 8:30pm via a free live stream on skysports.com, Sky Sports app, and the Sky Sports YouTube channel

Donovan Mitchell says he is working his way back to his All-Star level.

To the rest of the Utah Jazz, he looks just like himself.

Mitchell scored 10 of his 29 points in the fourth quarter and the top-seeded Utah Jazz beat the Memphis Grizzlies 121-111 on Saturday night to take a 2-1 lead in the first-round playoff series. 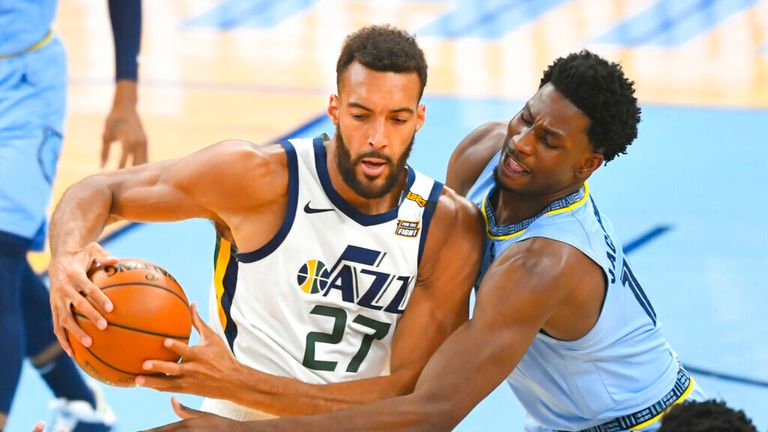 This was the second game back for Mitchell, who missed the final 16 games of the regular season and the first game in this series with a sprained right ankle. He was a bit more stoic in this game, and he said it was to help preserve himself for the end of games.

"It's a long game," Mitchell said. "It's been a while and just getting back into it. That's really it. Understanding that trying to save your energy as much as possible, not needing to be as exuberant, I think that's the right word to use, but I think just not being as loud and kind of demonstrative in my movements."

Mitchell's minutes went up from around 26 in Game 2, to 29 in Game 3. Though still slightly limited, and not nearly as efficient as he was in Game 2, he waited until exactly the right moment to put his stamp on the game. The man himself though, wasn't too impressed with his own performance when he shot 9-of-23 from the field.

"To be honest with you, I didn't play well," Mitchell said. "I was there in moments, but I think there were times I missed my teammates on a few things, and there's things I can definitely do better."

Conley, in Memphis where he started his career, matched his regular-season and playoff career highs with seven 3-pointers and finished with 27 points.

Game 4 is Monday night in Memphis.

"When you have a guy that has that much belief in his teammates and that competitive fire, you know he's going to make some things happen," Utah coach Quin Snyder said of Mitchell. "He's not going to be successful in every possession, but he was not going to be deterred either."

Memphis coach Taylor Jenkins was more unhappy at how the Grizzlies played the first quarter than the fourth.

"They made the plays down the stretch," Jenkins said of the Jazz. "Couldn't get the stops. A couple of and-1s. The first quarter, we just didn't have the discipline. Too many breakdowns, and they made us pay."