The Vitality Roses were 16-10 down after the first quarter; Jade Clarke showed fruits of her 138 caps to inspire turnaround; in the earlier contest Australia beat South Africa by 20 goals; England face Australia next on Tuesday at 7.30pm after New Zealand have taken on South Africa

England's Vitality Roses produced a stunning comeback to beat New Zealand 49-46 in their second match of the Netball Quad Series.

The home side, who had trailed by eight goals at one point, never panicked and instead used the latter stages of the first half to reel New Zealand back in.

Jade Clarke's arrival off the bench in the second quarter was the catalyst for the Roses' revival. They went into the half-time interval level at 25 goals apiece and then held a three-goal cushion with 15 minutes to play.

The final quarter saw the world champions pile on the pressure, however England's players remained calm and kept the scoreboard ticking to secure a second victory of the Netball Quad Series.

Historically, English victories over New Zealand have been hard to come by; the two outfits had met 103 times prior to this Test and the Silver Ferns had won 88 of those encounters.

However, the Roses' latest win over the world champions marks a third victory in their last four encounters and continues their winning momentum going into a fascinating contest with Australia on Tuesday.

Following a game-changing outing against South Africa, George Fisher was rewarded with a start and Clarke was brought into Jess Thirlby's matchday 12.

Dame Noeline Taurua had described the Silver Ferns' 53-39 loss to Australia as a "schooling", and she decided to switch up her defensive-end.

In the first quarter, the Silver Ferns' unit did an excellent job. They pressured England on the centre pass and didn't allow Metcalf room to freely feed the circle as she had done against South Africa.

New Zealand capitalised on errors from the Roses in the latter stages of the first quarter. They continued to up the intensity as the second played out, creating an uphill battle for the home side.

England have recent experience at coming back against New Zealand though, they overturned a 10-goal deficit during the deciding Test in Christchurch last year to win the Taini Jamison Trophy.

With five minutes to go in the first half, the Roses started to gain interceptions and force held balls.

Eboni Usoro-Brown, on for Geva Mentor at quarter-time, coupled well with Layla Guscoth, while England's most-capped international Clarke showed exactly what 183 caps' worth of experience brings.

Clarke's timing and presence in attack helped settle Metcalf, and the rest of the team. England went back to playing at their pace and not at New Zealand's.

With the scores locked at 25 goals apiece at half-time, it became a two-quarter shootout for the familiar foes. Neither head coach made changes at the interval.

During the third quarter, the gap between the two teams didn't increase beyond two goals, until the final shot.

Guthrie's interception, one of many second-half turnovers from England's captain, raised the roof and created their key scoring opportunity. Fisher's long-range shot then sealed the Roses' 39-36 advantage.

From the first moments of the final 15 minutes, England attacked. They thrived off the energy from the crowd and yet stayed composed in the face of New Zealand having a quick route to goal with Grace Nweke on.

England's composure to just keep on scoring off their own centre passes cemented a productive day at the office and Australia await them next on Tuesday. 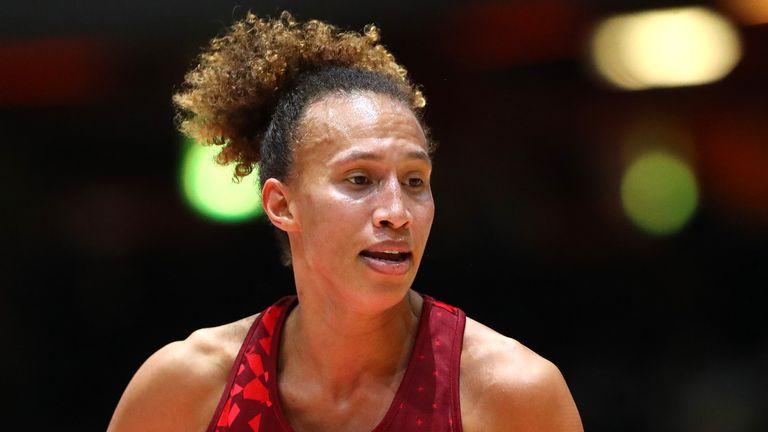 I'm really proud of the girls, the resilience that we showed was excellent. We knew that it was going to be a tough game, so I'm really pleased that we found a way to win.

The Australian Diamonds also remain unbeaten in this Netball Quad Series following their 60-40 victory over South Africa in the earlier match on Sunday.

Stacey Marinkovich's outfit produced a 33-17 second half in order to quell a determined start from the SPAR Proteas, who really started to find their feet defensively.

The head coach handed a debut to 21-year-old defender Sunday Aryang and used the encounter to run different combinations ahead of their meeting with the Roses.

"We've been challenged at different points, but the way in which the girls have been able to steady themselves and reconnect has come quicker than I envisaged. We've still got a long way to go though, and another brand to come up against now in England."

Watch every match of the Netball Quad Series live on Sky Sports and streamed on the Sky Sports YouTube channel. England's meeting Australia is live on Tuesday from 7.30pm on Sky Sports Arena; New Zealand versus South Africa starts at 5.30pm.