Geva Mentor talks defensive partnerships, a return to netball and another World Cup

"Age is just a number, I’d love to continue playing on through and I’d love to potentially see a sixth Commonwealth Games and a sixth World Cup - if I’m still of some use"

How does an England netball legend spend her time in lockdown?

"We can juggle, we can skip, we can sing, we can dance, we can tik tok, but playing netball I'm not sure how good we'd be at that if we had to play tomorrow," Geva Mentor tells Sky Netball's latest episode of Off the Court.

The 35-year-old is originally from Bournemouth, but as one of the best goalkeepers to play the game has spent the bulk of her career in Australia. And that's where she's locked down, waiting for the world's premier netball competition to get up and running.

Super Netball was due to start last weekend but Mentor and her Collingwood Magpies team-mates, as well as the rest of the league are waiting - but for the right reasons.

"The later we leave it, the more chance there is to play in front of a crowd and there's nothing nicer than walking into a stadium and feeling that atmosphere, it definitely makes you rise to the occasion.

The coronavirus pandemic means there'll be no Super Netball until at least June 30 and Mentor is pleased with one aspect that the league have announced - time to prepare. It might be needed, even for someone as experienced as Mentor.

"Luckily we will get a bit of notice but if we have to come back tomorrow, then I don't know what sort of standard the league is going to be in and that's probably across the board, if you've seen the girls have been doing challenges over the last few weeks.

"I'm very thankful particularly with the Suncorp Super Netball they've said they will allow a month's notice for us, so I will definitely take that month. I feel like I'm fit enough, but I don't feel like my ball skills are anywhere near ready. I will probably have to look at some tape as well, make sure I'm all geared up and focused in the right direction."

The right direction is what Mentor has been travelling in for some time. In more than a decade of netball in Australia she has picked up multiple titles, the league MVP award and most recently a CBE.

She's been playing for England as long as anyone in the current set up. 2002 was her first Commonwealth Games, 2003 her first World Cup. It perhaps meant more to no one else when the Roses claimed that memorable Commonwealth gold medal on the Gold Coast in 2018.

The good news for Roses fans is there is no end in sight for Mentor, whose presence is the defensive end is likely to be as vital to new coach Jess Thirlby as it was to her predecessors.

"For me age is just a number and I feel like I'm in the best shape I've been in for a while. I'm still loving what I'm doing and that's a big impact in what decision I make.

"It's not necessarily year by year, it's just as long as I am still performing and still contributing to a team, I will still keep putting my hand up and making sure I have that impact - hopefully on the international stage.

"I'd love to be involved, I'd love to continue playing on through and I'd love to potentially see a sixth Commonwealth Games and a sixth World Cup under my belt if I'm still of some use. At the moment it's just keeping myself as fit and healthy as possible and hopefully my netball can still do the talking."

So the long-term aim looks good, but with so much doubt about the domestic seasons in Australia, New Zealand and England, and how a season will look, Mentor will wait and see like the rest of netball fans.

"What that looks like now with restrictions on travel I think that's going to play a big part.

"Let's get domestic netball back on and see where the calendar fits and I think it's taking a lot of communication between the major countries in terms of how are we going to be able to factor in what schedule will be broadcast.

"What we need to do is tick off with the INF in terms of what they need to see netball wise, but hopefully we'll be able to get something this year." 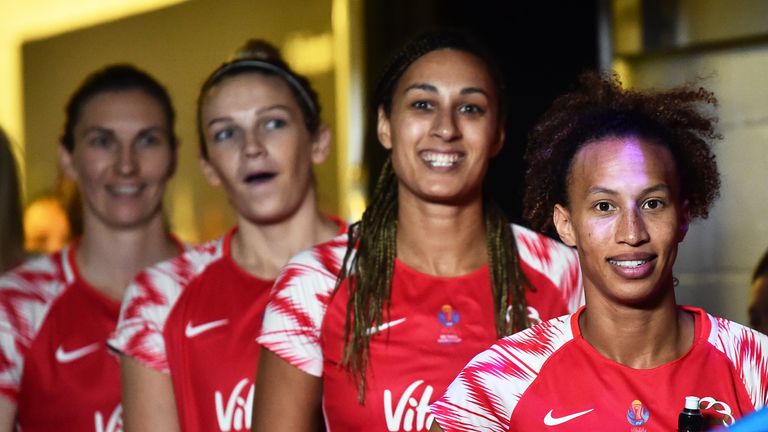 I factored in being able to come back into the English set-up after Suncorps this year and that would be looking at internationals from October onwards. I don't think it will look too promising in terms of internationals. I think we have to be realistic and hopefully by the beginning of next year for me personally I'll be able to get back in that England dress

As well as those England ambitions, which have remained steadfast throughout her career, Mentor is keen to get back to the day job and Australia may well be in a better position than most, with plans beginning to move into place for other sports.

"Obviously it would be lovely to play in front of a crowd but I think the beauty of being able to play it means we can broadcast it across TV and get it out to viewers who are able to watch some sport and watch some netball.

"We're definitely following suit in terms of the other codes here - NRL are looking at kicking off this month, potentially AFL next month and then fingers crossed we'll be the month after.

"The beauty of playing in front of no crowd means we can play at smaller stadiums and save some costs there, particularly because our sport has taken significant cuts with funding, so I think that will definitely pay in our benefit."

Finally, back to that question about keeping busy in lockdown. Mentor is pleased it won't be singing, dancing and tik-toking forever. For the no-nonsense defender, the return to business can't come soon enough.