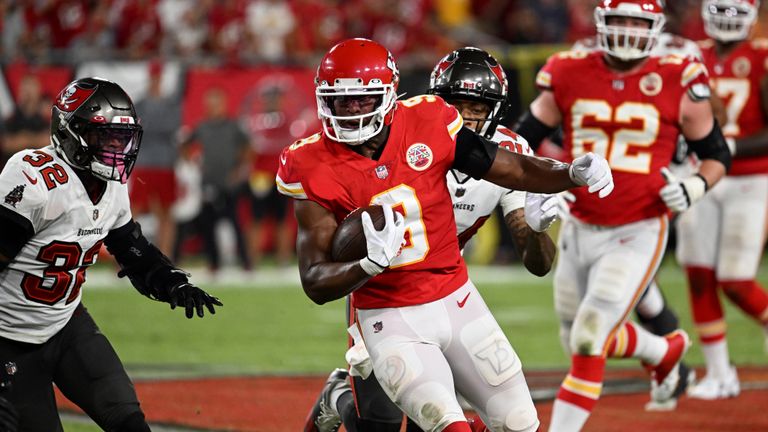 Patrick Mahomes threw for 249 yards and three touchdowns to lead the Kansas City Chiefs to a 41-31 victory over Tom Brady and the Tampa Bay Buccaneers.

Mahomes had all the answers for solving Tampa Bay's stingy defense, winning his latest matchup against Tom Brady in the stadium where the seven-time Super Bowl winner dealt him one of his most disappointing losses.

Playing at a sold out Raymond James Stadium only four days after Hurricane Ian ravaged portions of Florida, Mahomes had TD throws of 16 yards to Travis Kelce, one yard to Clyde Edwards-Helaire and 10 yards to Jody Fortson while making NFL history by reaching 20,000 yards passing faster than anyone else.

Edwards-Helaire and tight end Noah Gray rushed for TDs for the Chiefs (3-1), who won the first meeting between Mahomes and Brady since Tampa Bays 31-9 rout of Kansas City in the Super Bowl also played at Raymond James Stadium two seasons ago. 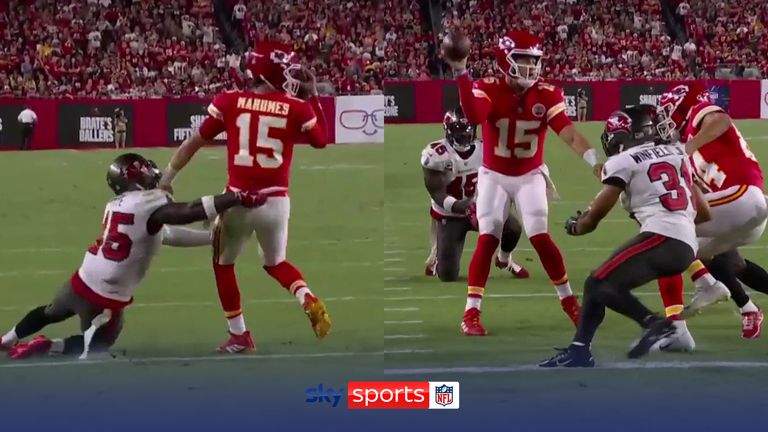 "When I came into the stadium I realised that I hadn't been here and the bad taste I had last time came into effect," Mahomes said. "But it's still not a playoff game. It's a regular-season game, which is important. That Super Bowl will always leave a bad taste for me."

The short pass to Edwards-Helaire was Mahomes at his improvisational best: He escaped two defenders, did a 360-degree spin move and flipped the ball over a crowd to the running back in the back of the end zone.

"I was able to use my speed, my little bit of speed, to get around the edge there. I was gonna run for it, but they kind of flew around me," Mahomes said. "I realised I wasn't going to make it and I saw Clyde, so I kind of flicked it up to him."

Brady noted it's fun watching Mahomes, unless he's on the opposing sideline. "I love seeing Patrick play. Unfortunately, we're on the wrong end of it tonight," said Brady, who's 1-2 against the Chiefs quarterback since joining the Bucs in 2020 after two decades with the New England Patriots.

Brady completed 39 of 52 passes for 385 yards and three TDs without an interception for Tampa Bay (2-2). The Bucs, however, played from behind the whole night after rookie Rachaad White fumbled the opening kickoff and Mahomes threw his TD pass to Kelce two plays later.

The Chiefs also got into the end zone on three of their next four possessions, with Mahomes repeatedly shredding the Tampa Bay defense with pinpoint passes and Edwards-Helaire and Isiah Pacheco taking turns running the ball effectively.

"It's a team sport. We didn't play great on offense. We didn't help (the defense) much, either," Brady said. "We didn't do great in the first half. Too many missed opportunities on third downs, turnovers. We gotta play a lot better to be one of the good teams, the seven-time Super Bowl winner. We havent' played our best yet this year."

Chiefs cornerback LJarius Sneed sacked Brady, forcing a fumble that Mahomes turned into Grays TD, with the tight end taking a direct snap from center on the 1-yard plunge that put Kansas City up 28-10.

Brady threw TD passes of 13 yards and 1 yard to Mike Evans, who returned from serving a one-game suspension for his role in a on-field brawl at New Orleans two weeks ago. He had eight receptions for 103 yards.

Evans' second TD trimmed Kansas City's lead to 28-17 at half-time. That was as close as the Bucs got until Leonard Fournette's 5-yard TD reception cut Tampa Bay's deficit to 41-31 with 3:30 remaining. Brady wouldn't get the ball back until less than a minute was left.

Kansas City finished with 417 yards of total offense, including a 189-3 edge on the ground, against a defense that had allowed a league-low 27 points through three games.

"Everything in this game fell on the defensive side of the ball," Bucs coach Todd Bowles said. "You name it we did it. Missed tackles. Missed assignments. Bad calls."

The Bucs sacked Mahomes three times and intercepted him once, but it was not the coming out party linebacker Shaquil Barrett thought his team could have against an offensive line the Chiefs have overhauled since struggling against Tampa Bay in the Super Bowl loss.

With Hurricane Ian approaching the Florida Gulf Coast, the Bucs evacuated for four days to the Miami area, where they practiced Wednesday, Thursday and Friday at the Dolphins' training facility while the NFL made contingency plans to move the game to Minneapolis if it couldn't be played in Tampa.

The Glazer family that owns the Bucs has announced it is donating $1m for hurricane relief. The NFL Foundation is matching that donation, and the Bucs on Sunday night began a Florida Strong campaign to raise funds, as well as honor emergency personnel and first responders.

Players and fans observed a moment of support prior the national anthem, and the Bucs also paid tribute to those affected by the hurricane in a video presentation displayed on giant scoreboard screens before the game.