"I have the game tape, I have the production, I have the wonderlic score, pretty much all the accolades you want and need but I still got that label a little bit of 'not athletic'."

"Eventually they had to put me in football because I was too wild for gymnastics," jokes the back-flipping, hand-standing, extreme sport advocate facing doubts over his 'athleticism' ahead of the NFL Draft.

Kenny Willekes grew up without a television with which to study his footballing idols. What he did have were seven brothers and sisters whose hereditary competitiveness would shape the psyche of a limit-pushing NFL prospect.

Four years after suffering a career-threatening knee injury, Teddy Bridgewater is onto his next challenge as free agency's feel-good comeback story.

A will to defy boundaries is prevalent in his background, Willekes arriving at Michigan State in 2015 as a walk-on from Grand Rapids before earning a scholarship in his sophomore year and leaving as a record-holder for all-time career tackles for loss (51).

The defensive end was recently among those to see his Pro Day cancelled due to COVID-19, although that didn't stop him addressing questions over his athletic ability with a showreel of his own.

"We didn't have a Pro Day so I wanted to use that as an opportunity to show people that I am athletic, I think my resume speaks for itself," Willekes told Sky Sports.

"I have the game tape, I have the production, I have the Wonderlic score, pretty much all the accolades you want and need but I still got that label a little bit of 'not athletic', 'can't bend the edge', 'not flexible' which was really weird to me because I've been able to do these types of things my whole life.

"I can do the splits, I can run up the wall and do a back-flip, I felt like I just wanted to show people that side of me. You have all the internet trolls like 'how does this relate to football?' - it doesn't relate to football but I think my production speaks for itself.

"It was just to show them I have unique athletic ability as well."

That Willekes household rivalry creeps through as the 22-year-old admits he was the last of his three brothers to learn how to perform a standing back-flip.

So, how did the six-foot-four, 265lb quarterback hunter stumble across such agility?

"I think it comes from my parents, they're both very athletic," he added. "Growing up my mum had us doing some gymnastics. Eventually they had to put me in football because I was too wild for gymnastics.

What's waiting for Brady in Tampa?

"My older brother stuck with it. He (Lourens) was at Olympic trials (for trampolining) right before this virus went down trying to compete for the 2020 Olympics. My little brother did it for a while and some of the stuff he can do is absolutely insane.

Willekes' college tape promotes an instinctive and unrelenting pass rusher with a fierce work ethic partly inspired by his father, a cardiothoracic surgeon. An accomplished tackling technique and adeptness for finishing plays also shines through, stemming from his high school rugby roots.

The tackling machine hauled down opponents 78 times last season, as well as recording 10.5 sacks as he won the Burlsworth Trophy, awarded to the most outstanding FBS player that started as a walk-on, and was named to the All-Big Ten Conference team.

"My game's all off effort and intensity," he explained.

"I'm going 100mph, I'm attacking you non-stop, I play physical, I play with great leverage. I try to stay low, play low and I think that's pretty much what my game is. I'm beating you up and they get sick of me."

The wrap and roll technique taught in rugby is something Willekes still reverts to as he strives to not only pressure the quarterback but also pose as a recognised run-stuffer, much like the defensive stars he takes notes from.

"I think I got that from rugby, just the Hawk Roll," he said. "Not as many big hits obviously but I get the runner to the ground more times than not. Definitely I think I learned that playing rugby. 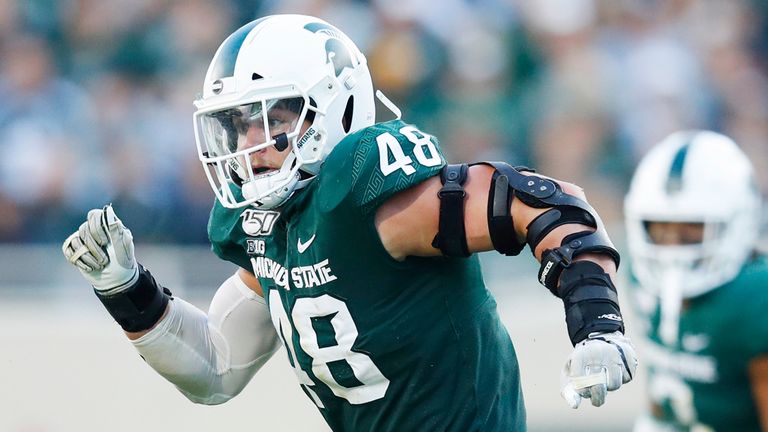 "I think stopping the run is just as important as rushing the quarterback. Being a complete football player is something I pride myself on."

Willekes on being a 'complete player'

Willekes, who played at linebacker and running back in high school, was named 2018 Big Ten Defensive Lineman of the Year after leading the conference with 20.5 tackles for loss and producing 8.5 sacks. His 78 tackles also ranked first among all defensive lineman in the nation as he was named to the All-Big Ten First Team.

He might well have declared for the 2019 NFL Draft had it not been for the broken fibula suffered in the 2018 Redbox Bowl against Oregon.

"It's never easy to come back from an injury," Willekes admitted.

"It's a lot of hard work, a lot of rehab. I think I learned a lot about perseverance, it taught me things about being a leader and helped me mature a lot as a man over this past year dealing with the ankle injury.

"I think it's prepared me for anything I'm going to face at the next level."

Having recovered from his injury in time for his senior year, Willekes went on to earn All-American honours and win Michigan State's MVP award for the second successive season.

A late addition to the 2020 Senior Bowl, he left his mark in January's college all-star game with two sacks in front of NFL coaches and scouts.

"It was a great opportunity, a special thanks to Jim Nagy and the whole Senior Bowl for giving me the opportunity to come out there and compete," he said.

"You don't only compete against the best but learn from some of the best, I like to pick people's brains, I like to talk to other players and see what moves they like to use."

Experience in a 4-3 defensive system has developed Willekes into a natural 'hand in the dirt' rusher, however he has also worked hard to polish his two-point stance in a bid to add to his value.

He underlined that versatility at the Scouting Combine in Indianapolis, taking part in both defensive lineman and outside linebacker drills as he ranked in the top 10 for all performance tests among edge players.

"The combine was another opportunity to not only showcase myself but also workout with some of the best. They talk about how stressful a week it's going to be and how it sucks but I had a lot of fun.

"A lot of us did defensive line drills, a lot of us competed at linebacker and I think that was good for teams to see me move around as a linebacker a little bit."

Such are the times that Willekes' pre-Draft interviews with NFL teams have been conducted virtually, his whiteboard proving useful in talking through various plays with coaches.

"Obviously it's a little different because usually it's going to be in person, I like talking to people in person, I'm a people person," he added.

"Like anything in life you click with certain people and you like how a meeting with a coach went. So far I've had all positive interviews and good results both ways. I've liked the coaches I've talked to and I think they've liked me as well."

Among those to have been in contact with Willekes are the Baltimore Ravens, New York Giants, Dallas Cowboys and San Francisco 49ers.

The latter loom as an enticing landing spot for any upcoming defensive star after ranking first against the pass on their way to Super Bowl LIV last season.

"It's definitely exciting, I love the way they play," admitted Willekes.

"Just that non-stop getting after the ball, non-stop attacking defense. They've got great players on there, a great d-line.

Chase Young headlines the 2020 Edge Rusher class, leading the group with a 97 Production Score based on his on-field performance at Ohio State.

The draft beckons as an early reward for the faith former Spartans coach Mark Dantonio put in Willekes five years ago, and deserved justification for the faultless work rate the chemistry graduate has displayed since then.

It won't quite be the draft party Willekes had imagined, but the virtual format will take nothing away from a landmark moment in his career.

"I'm definitely excited to see where I go and where I end up," he said. "I'd obviously like to get drafted as high as possible but it doesn't really matter.

"Wherever I go I'm about to go to work and prove myself.

"It speaks to hard work, perseverance, surrounding myself with people doing things the right way and I think if you can do that you can accomplish a lot."