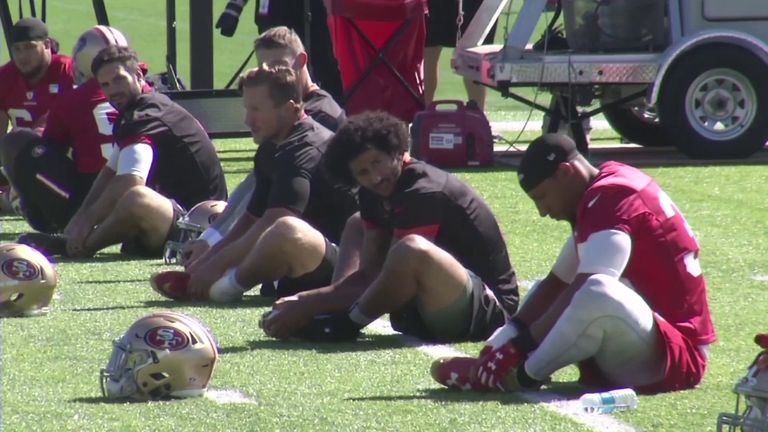 Donald Trump said on Wednesday he would "love to see" Colin Kaepernick get another chance in the NFL but that the quarterback's form when he last played "wasn't up to snuff".

Kaepernick has not been signed by an NFL team since opting out of his contract with the San Francisco 49ers in 2017. That year, Trump urged team owners to fire athletes who take a knee during the anthem, and on Sunday the US President said he would not watch NFL games if players did not stand for the national anthem.

Asked during a press conference on Wednesday whether Kaepernick should get another opportunity in the NFL, Trump said he "absolutely" should if he is good enough, but questioned whether the quarterback's form the last time he played warranted it.

"If he deserves it, he should," Trump said Wednesday during an interview with WJLA-TV, in Washington DC. "If he has the playing ability.

"He started off great, and then he didn't end up very great in terms of as a player. He was terrific in his rookie year. I think he was very good in his second year and then something happened. So his playing wasn't up to snuff."

Trump continued: "The answer is absolutely I would. As far as kneeling, I would love to see him get another shot. But obviously he has to be able to play well. If he can't play well, I think it would be very unfair."

Kaepernick's kneeling protest came under renewed focus in recent weeks, as demonstrations against racial injustice and police brutality spread across the country after the death of George Floyd, a black man who was killed in police custody in Minneapolis.

NFL Commissioner Roger Goodell said this month that the league had made mistakes in not listening to players. He said on Monday he would encourage teams to sign Kaepernick, adding that the league would also welcome the quarterback's off-the-field guidance on social justice.

Kaepernick filed a grievance against the NFL in 2017, claiming collusion after no teams signed him. He and the NFL settled in 2019.