"It was a little bit of a mental lapse, just trying to show sportsmanship and stuff like that, but I feel like the protocols in place are good"

Mahomes and cornerback Gilmore shared a brief hug after the two teams met on Monday night in Kansas City.

It was revealed on Wednesday that Gilmore had tested positive for coronavirus and it has been reported that players for both teams wore contact tracers during the game, a 26-10 win for the Chiefs, although no one in the Chiefs organisation has been notified that they should isolate because of prolonged contact with someone who had tested positive.

"I think you just have to trust in the process and the protocols that are set in place," Mahomes said. "Obviously, knowing that I went up to him after the game and just getting the high-five like I've done my whole career and not thinking about it.

"It was a little bit of a mental lapse, just trying to show sportsmanship and stuff like that, but I feel like the protocols in place are good."

Kansas City fans, remembering the postgame moment, took to social media to express fears for the safety of their beloved young quarterback after hearing Gilmore tested positive, and Mahomes tried to calm their jittery nerves. 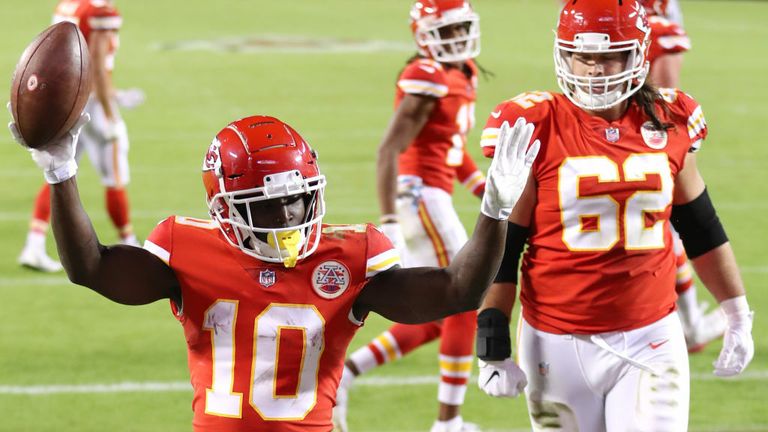 "I'll try to keep away from that and try not to do it again," Mahomes said, who won the NFL Most Valuable Player Award in 2018 and followed it with a Super Bowl Championship the following season.

Mahomes said Rick Burkholder, the team's vice president of sports medicine and performance, spoke with the players about the protocols.

"Rick reminded guys after the game, and he also reminded guys today in our meetings about the protocols and the different stuff we have to do in the building and during the games," Mahomes said.

"I think as long as we listen to those protocols, we can keep from hopefully having any outbreaks or anything like that. Keep it to an isolated incident and hopefully be able to go out there and play the sport that we love every single day."