Russell Wilson's blockbuster trade: What it means for Denver Broncos, Seattle Seahawks and the rest of the NFL

Russell Wilson heads to the Broncos in one of the biggest trades of modern NFL history after 10 seasons with the Seahawks; Sky Sports' Cameron Hogwood explores what it means for both teams and the rest of the NFL.

A Seahawks departure felt imminent and due and right. The question was who: be it Wilson, soon-to-be-71 head coach Pete Carroll or general manager John Schneider as their perennial playoff machine skidded to its first losing campaign and just its second postseason-less year since 2011.

In the end, and maybe surprisingly, it was Wilson, whose freelancing nothing-into-something heroics had recently lost a little Championship-carrying sparkle, and whose frustration had crept into public 'let's overreact' knowledge last offseason when he voiced his desire to have more influence in decisions behind-the-scenes. Try finding a long-serving employee that doesn't want more of a say!

While the Denver Broncos fell short of landing Aaron Rodgers, they did succeed in ambushing the news of his not-so-final final Green Bay Packers rodeo by pulling the trigger on their backup plan. That being a blockbuster trade for Wilson that would send quarterback Drew Lock, tight end Noah Fant, defensive lineman Shelby Harris and a haul of Draft picks in the opposite direction.

It sounds like a bargain because it probably was. For all the NFL has come to learn about a lottery-scarred 'will he won't he?' Draft process and Seattle's rather 'meh' production within it, the Broncos went unscathed as they snagged a puzzle piece to slot nicely into their alpha squad of offensive artists.

If not Wilson, Seattle's subsequent release of 10-year veteran linebacker Bobby Wagner, the only other remaining member of the 2014 team that lost to the New England Patriots in the Super Bowl, served as confirmation of a team ripping the band-aid on a new beginning for the franchise.

Carroll's hesitancy to, apologies, 'let Russ cook' in favour of his pound-the-rock offense resisted only when it was too late. He and Seattle had sought to turn a corner with the appointment of West Coast window-dressing hero-ball-relaxing Shane Waldron as offensive coordinator last year in the hope that it would finally shift things beyond the lingering Brian Schottenheimer and Darrell Bevell wrinkles for good.

Promise fluctuated, though, and between scheme, a debilitating finger injury and Wilson's reluctance to pepper the middle of the field, the prospect of wholescale change fizzled out.

Seattle would not have been wrong to compare their situation to that of the reigning champion Los Angeles Rams, the San Francisco 49ers and Arizona Cardinals in the NFC West and conclude that another Super Bowl campaign looked unlikely in Wilson's final two contracted years. Nonetheless, the Seahawks offense was far from the damp squib it was made out to be as Wilson overcame injury to lead a unit that still ranked seventh in DVOA (Defense-adjusted Value Over Average), weathering the league's two-deep coverage trend that put the brakes on that haymaker deep shot he is always striving to set up.

Carroll's defense meanwhile slumped to a 21st ranking in DVOA with a blitzing safety in Jamal Adams whose trade cost of two first-round picks threatened to handicap any upcoming rebuild. Seattle recouped those first-rounders courtesy of the Wilson deal, which gives them some new options.

The trade debunked recent mock drafts, it catapulted Denver into contention, it amplified the quarterback disparity between the two conferences, it partly-justified Rodgers' decision to stay in the NFC, it tempered Seahawks expectations in the immediate future and it opened a blank page on Wilson's legacy. It also called for a touch of sympathy for Tyler Lockett, the recipient and often driver of Wilson's 'go long!' exploits. 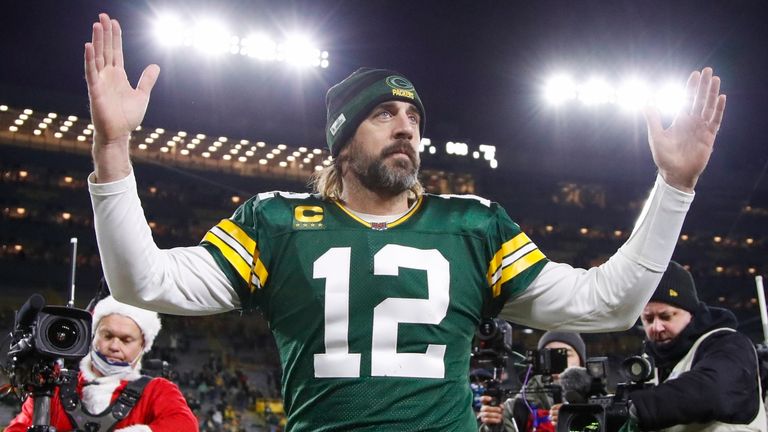 "This is a copy-cat league," said Sky Sports NFL expert Jeff Reinebold. "You do something that gives you an edge, everybody else is going to copy that, whether it's nutrition or how you practice, anything that's the latest blueprint to win a Super Bowl.

"And who's the latest blueprint to win a Super Bowl? You got to go to Los Angeles and look at what they did by going out and getting a veteran quarterback (Matthew Stafford) that was on the market.

"It cost them a lot, but it brought a Super Bowl to Los Angeles and I think this is a direct reflection of that.

"The Broncos are sitting there and saying 'look at us, we've got three great young receivers, an improving offensive line, depth at running back, a great defense, what are we missing? What's keeping us from the Super Bowl? A great quarterback'."

A key part of the equation is newly-appointed head coach Nathaniel Hackett, whose offensive coordinator stint with the Packers entailed a glowing testimonial from Rodgers.

His marriage with Wilson arguably becomes the most compelling in the league heading into the new season as he tackles overseeing an entire team for the first time in his NFL coaching career.

Expect a wide-zone rushing attack and the designed keepers to vacate the pocket and the play-action fade/sail/deep crosser concepts teed up by a box-filling running back in Williams that Wilson's deep-ball has found joy with over the years.

The depth of Denver's receiving core also invites the empty spread formations to create tasty one-on-one matchups across the board, the asterisk, as with all Hackett's offense does, being a reliance on an offensive line that allowed 40 sacks in 2021.

Hackett extracted the best of a limited Blake Bortles as the Jacksonville Jaguars reached the AFC Championship Game in 2017/2018 and he has been at the heart of implementing the Matt LaFleur offense in which Rodgers has excelled as well as putting his own stamp on.

Wilson, as with Rodgers, comes with his own intricacies and defining preferences. How the two come together will be fascinating - and notably helped were the Broncos to go out and strengthen their pass protection in free agency.

A contender-creating trade comes within a division of Patrick Mahomes and Justin Herbert and pass rush duos of Joey Bosa and Khalil Mack and Yannick Ngakoue and Maxx Crosby. It comes within a conference stacked with Josh Allen, Joe Burrow and Lamar Jackson-led ready contenders, with Myles Garrett and T.J. Watt, with a Bill Belichick party-spoiling machine, a pending Trevor Lawrence breakout, Derrick Henry and more.

New Las Vegas Raiders conductor Josh McDaniels might have afforded himself a 'really?!' chuckle over the timing of his decision to have a long-awaited second shot as an NFL head coach in the AFC West of all places.

Elsewhere, a staying-put Rodgers may have allowed himself an extended vacation at the sight of an NFC in which his only real clear threats appeared to come from the West, only for Tom Brady to announce he was returning with the Tampa Bay Buccaneers just 40 days after retiring. Ouch.

As for the Seahawks, they could match Denver's 'why wait?' motto with a 'why not?' approach to rebuilding by taking a chance on a member of this year's divisive quarterback Draft class. They could also dip into an unspectacular but veteran-filled free agency pool for a bridge option.

Or they could ride with Lock, unlikely to prove a long-term solution, before targeting a Bryce Young (Alabama) or CJ Stroud (Ohio State) in 2023.

A trade deemed the biggest in the NFL since running back Herschel Walker was sent to the Minnesota Vikings in 1989 brings a new and legitimate contender to the table, it reaffirms the icing-on-the-cake quarterback scramble, it adds some pressure to first-time Broncos defensive coordinator Ejiro Evero to uphold and even exceed Fangio-set standards and, the sentiment of which has been largely overlooked, it breaks up one of the most familiar fan-quarterback bonds of the last decade.

But snapping a streak of six straight losing seasons won't equate to success. Trading for Wilson will mean little, if not nothing, unless the Broncos can reach the Super Bowl behind him.