Sky Sports' Neil Reynolds has the final word on Week Two in the NFL, picking out his five major takeaways, player of the week and more; join Neil and guests for a look back on the best of the weekend's action with the two-hour NFL Review show - every Tuesday from 9pm, Sky Sports NFL

Week Two was one of the most amazing weekends of NFL action we've ever seen, again. I know I may sound like a broken record, but it really did have everything, including mega comebacks galore...

1) A turning point for Tua?

There have been so many questions about Miami Dolphins quarterback Tua Tagovailoa, about how was he going to look this season - it's a real 'prove it year' for him.

I still don't think he's ever going to throw the football like Patrick Mahomes or Justin Herbert, but he showed what he can do on Sunday - 469 yards passing and six touchdowns. Incredible!

It's clear how the Dolphins are going to attack teams. Tyreek Hill and Jaylen Waddle were targeted 32 times and finished with 22 catches and four touchdowns between them.

It was an incredible comeback by Miami, having trailed the Baltimore Ravens by 21 at one stage in the fourth quarter of their 42-38 win. And the nature of the win was important for Tua - if he had those numbers in a 45-0 blowout, I'm not sure we'd be as excited. There was no room for error, especially with his clutch throws at the end of the game. His touchdown pass to Waddle to win it was a really tough, tight-window throw.

I think it is a turning point for Tua, but now I want to see how he grows from this... with a big game against the Buffalo Bills this week.

The Arizona Cardinals are a prime example of how no lead is safe in the NFL. I thought midway through the third quarter of their game in Las Vegas that they were heading for another defeat and a really disappointing start to the season. 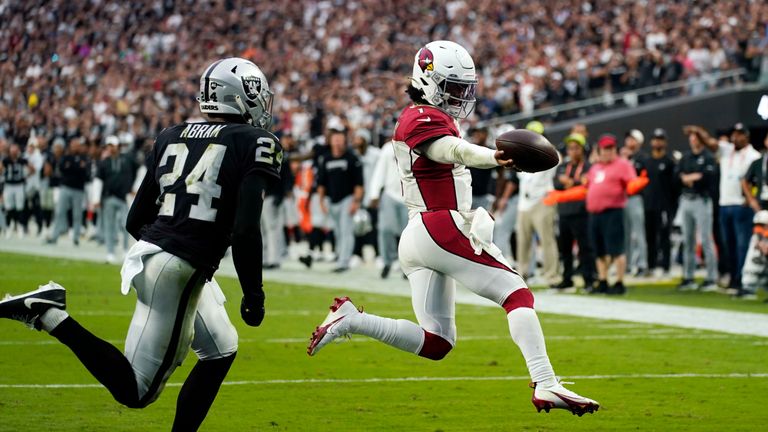 But Kyler Murray just took the game over. It was almost video-game-like at times - he had a two-point conversion play where he ended up scrambling for 84 yards, taking up 21 seconds, before finding the endzone. That's something we've never seen in the NFL.

This game had so much drama. Even at the end, when Byron Murphy Jr. returned a fumble 59 yards to win it for Arizona, he threw the ball away in celebration and there were replay reviews to see if he had crossed the goal line before tossing it away. That about sums up the craziness of the NFL right now. If anything positive is going to come out of this season for the Cardinals, it will be because of Kyler.

3) Jimmy G back leading the Niners

It's just bizarre how things turn out in the NFL that, after an entire offseason of speculation as to where is Jimmy Garoppolo going to play in 2022, the San Francisco 49ers ended up keeping him - and now they need him.

It's really sad for Trey Lance, who is now out for the season after fracturing his ankle early on in the win over the Seattle Seahawks on Sunday, but it now opens up the opportunity for a Garoppolo redemption story.

I was at San Francisco's training camp in the summer where he was banished to a different practice field to the team. He was a forgotten man. And now it is going to be on his shoulders to lead a talented team to the playoffs.

You could see on Sunday just how much the team rallied around him and how keen they are for him to succeed. And there is no cloud hanging over the 49ers now as to when Lance might be benched for Jimmy G. I think there's now a chance that Garoppolo could have this job long-term again if he was to have a great season. Lance will have effectively missed three years of football when he comes back from injury [after a covid-affected 2020 season and a year as back-up in 2021]. That would be a concern, and we have seen teams move on in the past.

4) Saints made to pay for mistakes

I thought the New Orleans Saints played perfectly to their plan on Sunday, in terms of how well they defended Tampa Bay Buccaneers quarterback Tom Brady for much of that game... only for it to slip away from them in the fourth quarter. 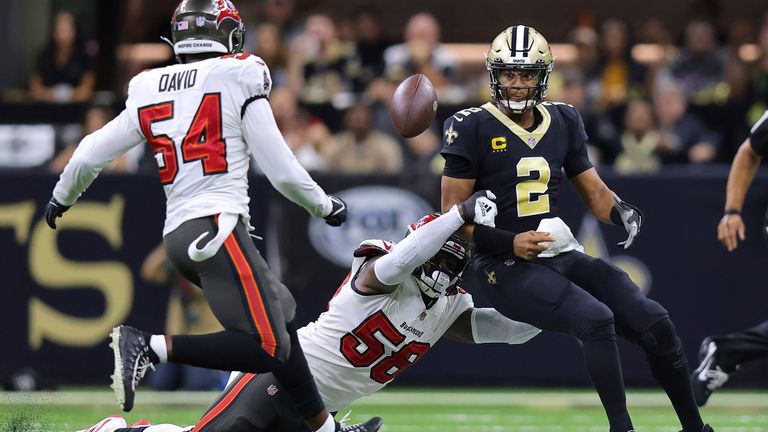 I don't think they'll panic too much. They just need to get back to not turning the football over.

Admittedly, they came up against a very good Tampa defense which has allowed just 13 points in their first two games of the season, but Jameis Winston - again in a big game - made too many mistakes, throwing three interceptions. 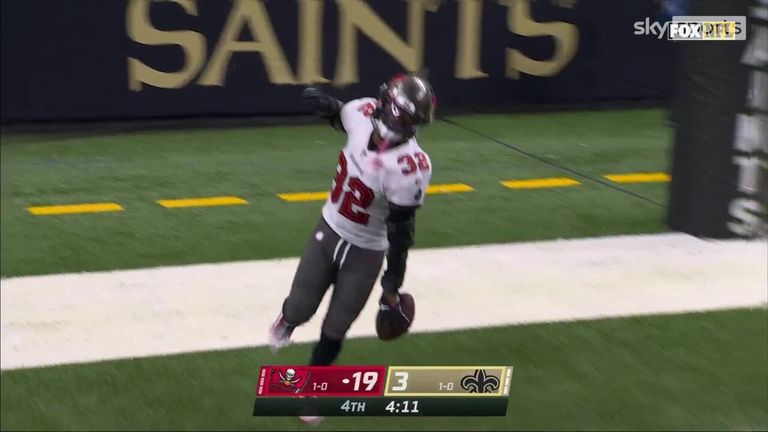 We've seen that before when he was quarterback of the Buccaneers, but we hadn't really seen it yet for the Saints. How he bounces back from the defeat will be really important for New Orleans. 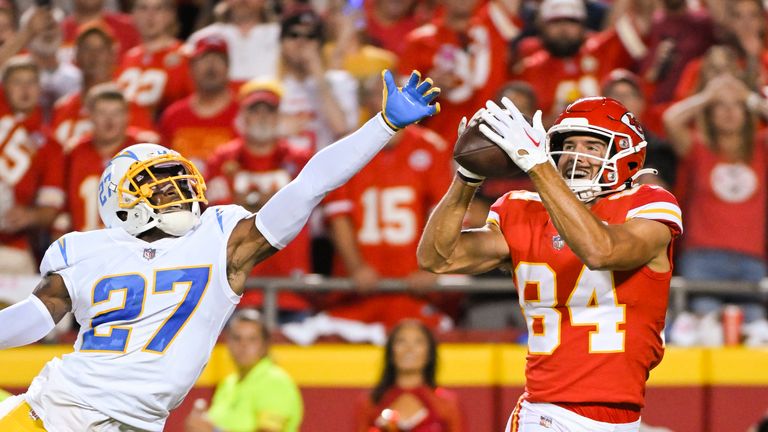 The Jets were two scores down against the Brows with about two minutes left - Cleveland had a probability rate of 99.8 per cent to win that game. Meanwhile, Miami's was the first 21-point comeback in the fourth quarter of an NFL game in 12 years - going into Sunday, teams were 0-711 in such games until the Dolphins win.

I don't know the reason behind it; is it that the game is so geared towards the offense now, that teams can just suddenly start slinging the ball all over the field? Is conditioning a factor this early in the season? Do coaches with a lead go within themselves and get too conservative?

Whatever the reason, a word of warning to you fans out there: if you're watching on a Sunday and your team is up by three touchdowns, don't get too comfortable. That said, if you're down by three scores, also don't give up.

There are going to be rollercoasters every week in the NFL.

The Tyreek Hill factor is real in Miami.

He was targeted 13 times, with 11 catches, 190 yards and two touchdowns. He was so wide open on two of those scores, he was literally able to stand there waiting for Tua to deliver the ball. 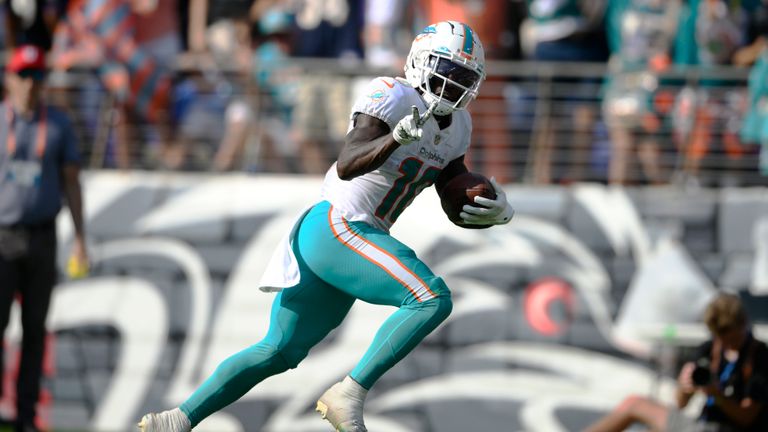 Hill is going to be an every-week problem for Miami's opponents, and he could prove to be a franchise-changing force.

And, as for Tua, he has to be in there for the obvious reason - his ridiculous numbers on Sunday - and the fact he did it on such a big stage.

He still has a huge amount of doubters, sadly, so he might have to put in a few more of these performances to truly make people believe.

Play of the Week: Kyler Murray

I haven't seen anything like it before in the NFL, his 21-second run for the two-point conversion. 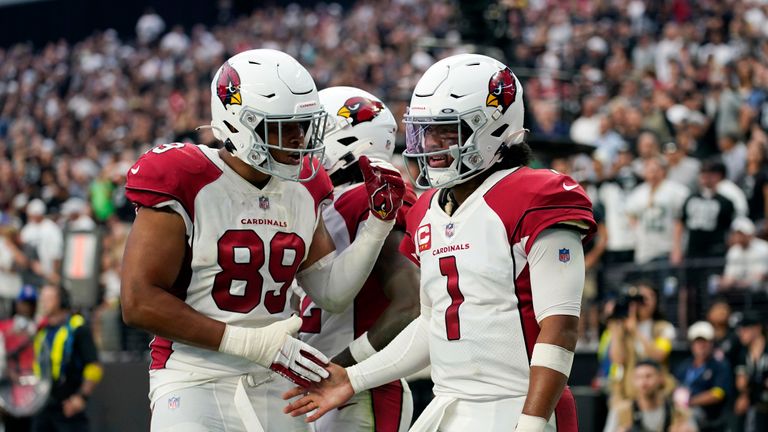 For it to take that long - dropping all of the way back to about the 25, 30-yard line - and for him to still find the endzone was incredible.

Also, almost as good, was his pass to A.J. Green to tie the game at the end of regulation. We won't see a better pass than that all season long - there was never a window there to throw the ball. There is no way in any world that Green was open, but Murray zipped it in there and the receiver made the catch. Breath-taking.

Coach of the Week: Nick Sirianni

The Philadelphia Eagles had such a positive offseason, that everyone was going to be watching them, putting pressure on them.

It would therefore have been a real disappointment if they'd started this season by stumbling out of the blocks. But nothing of it - the Eagles have been everything we hoped they would be.

They won with offense in Week One and defense in Week Two with the Monday night win over the Minnesota Vikings - another team who had been hyped up after a win in the first week. And Philly beat them convincingly.

They look a complete team.

On My Radar: Bengals O-line

This hasn't been fixed.

I mentioned it in my Week One column, but Joe Burrow was sacked six more times on Sunday - that makes 13 in two games and, add in the Super Bowl defeat, it's 20 in three games. I don't know how the Cincinnati Bengals fix it, but it is something I'm going to be watching out for going forward, the sack totals of Burrow every week - it's taking the wheels out from under one of the best players in the NFL. It's criminal what they are doing.

Despite all of this, Burrow still nearly led the team back to victory over the Dallas Cowboys, only for the defense to give up a game-winning field goal late on. The Bengals have been a huge disappointment so far, 0-2 to start the season.

Join Neil Reynolds and guests for their two-hour NFL Review show looking back on the best of the weekend's action - every Tuesday from 9pm on Sky Sports NFL.