Ortiz Jr had the Christophe Clement-trained two-year-old settled at the rear of the field, before plotting a way through in the final two furlongs and picking up George Boughey's Cachet, who ran an excellent race before fading into fourth.

Owner-breeder and celebrity chef Bobby Flay, said after the race: "I cannot believe it but this is what it's all about.

"If you are thinking for one second about getting into horseracing, this is the moment.

"Winning a Breeders' Cup race is obviously a dream come true but being able to share it with my family is what it's all about."

Echo Zulu was a very impressive winner of the Grade One Juvenile Fillies, dominating from start to finish to run away a five-length victor for Joel Rosario and Steven Asmussen.

She broke best of all to lead around the first bend, attempting the mile trip for the first time, with jockey Rosario getting the fractions spot on and pushing clear with two furlongs to run from Juju's Map who stayed on to finish second. 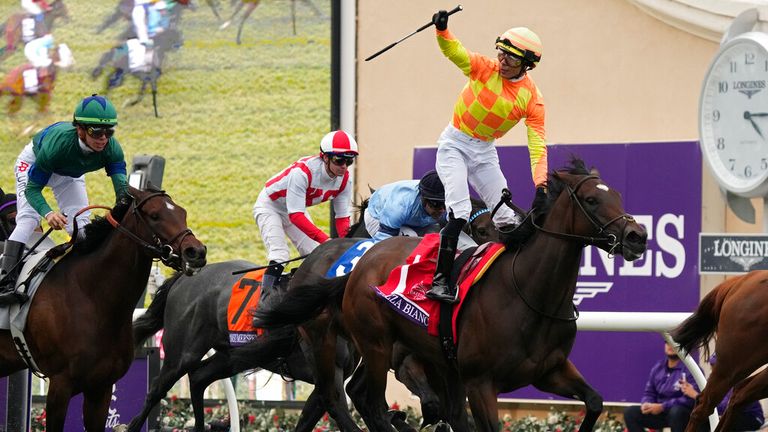 Rosario - who has now won three of the last four Juvenile Fiilies - said after the race: "Steve just told me to let her get her way and let her do her thing.

"She broke really well and she looked like she enjoyed it. I was pretty confident up there."

Earlier on the card, Twilight Gleaming got Wesley Ward off to the perfect start to his Breeders' Cup, taking the Grade Two Juvenile Turf Spirit in determined fashion.

The two-year-old filly broke smartest of all for Irad Ortiz Jr, edging into a half-length lead before powering clear around the turn and holding off the late charge of Go Bears Go, who was an excellent second for Shropshire trainer David Loughnane.

Wesley Ward, who also had the third in the race with Kaufymaker, was in a confident mood after the race saying: "This filly had good spacing from when she ran in France with Campanelle and every work she's had in Keeneland just kept on getting better and better.

"I knew she was coming in fit, fresh and ready to go and she did it. We're just starting to get serious now!"