King Charles III will have runners in the royal silks for the first time on Thursday at Salisbury; he has previously owned horses in his own colours, alongside the Duchess of Cornwall, now the Queen Consort; Tom Marquand will take the ride on Educator

The King will have his first runner in the famous royal silks as Educator lines up at Salisbury on Thursday.

While His Majesty has previously had runners in the colours he shared with the Queen Consort when they were the Prince of Wales and Duchess of Cornwall respectively, it will be the first time the famous purple, red and gold silks will take to the track in his name.

The William Haggas-trained Educator was a one-time Classic hope for the late Queen, but the three-year-old has not run since winning a Newmarket handicap by a nose back in April. 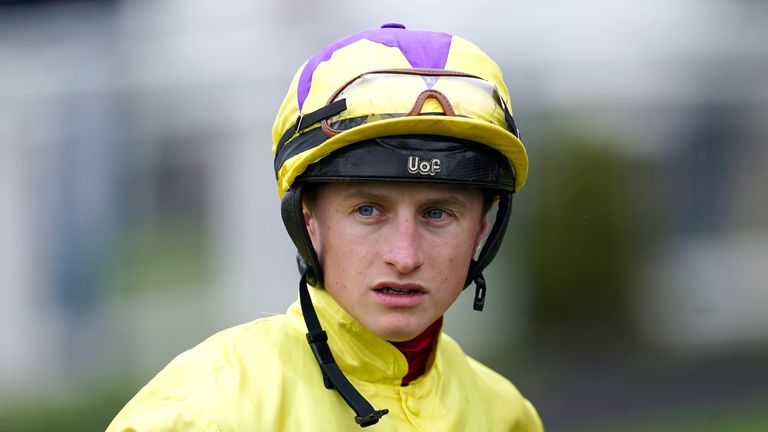 Leading jockey Tom Marquand says riding for The Queen remains one of his proudest moments, ahead of The King's first runner on Thursday

Educator was one of two horses who galloped up Warren Hill in the royal silks as a tribute to the monarch at Newmarket's Open Weekend earlier this month, but he will now don the colours in competitive action in the Radcliffe & Co Handicap.

He will be the first horse to race in the colours since Improvise was beaten a short-head at Epsom on September 8, the same day the Queen died at her Balmoral estate in Scotland.

Tom Marquand will be aboard the son of Deep Impact and he admitted it will be a mixture of feelings as he gets the leg up on a landmark runner for King Charles III.

He told Sky Sports Racing: "Having ridden for the Queen they will remain some of the proudest moments of my career for the entirety of it. Riding the first runner (for the King) is a moment to cherish as well.

"Educator is a lovely horse, he's shown a bit of character at home and he thankfully got his head in front at Newmarket at the start of the season.

"He's obviously an important runner, it will be a sad day and a happy day at the same time."

Joe Saumarez Smith, chair of the British Horseracing Authority, expressed his delight that the King has taken on the royal racing interests, with the Queen having been a renowned owner and breeder, as well as one of the sport's most famous supporters.

He said: "The loss of Her late Majesty was keenly felt within the racing and breeding industries given her lifelong passion for the sport, and so we are naturally thrilled to see that the horses previously owned by her will race on in the ownership of His Majesty King Charles III.

"Her late Majesty Queen Elizabeth II left an indelible mark on our sport and her legacy will continue to be felt, not only through the horses that will continue to run in the name of King Charles III, but also those she bred who are yet to be seen on the racecourse in the years to come.

"We wish Educator and King Charles III the very best of luck on Thursday and keenly look forward to further successes in those famous royal silks on British racecourses."