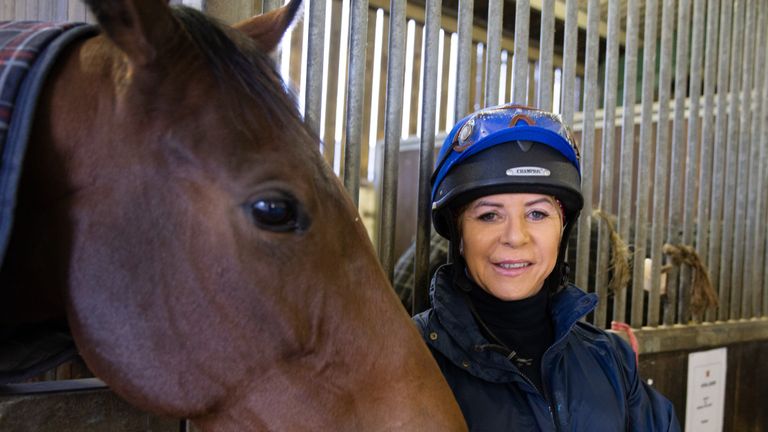 Victoria Smith says finding acceptance within the racing community after returning to the sport as a trans woman has been the perfect scenario.

Smith came out as trans in February 2018 at the age of 52, following a professional career in racing that lasted for 17 years as a jockey - during which she rode 250 winners - and then a further five years as a trainer which delivered 82 winners.

In May 2018, she made headlines again when she rode Roy Rocket to second place in a charity race at Warwick, making her the first known trans jockey in the sport in the UK.

Smith has been reflecting on her journey in a new short film produced by Great British Racing, which has been released to coincide with the annual activation of Stonewall's Rainbow Laces campaign.

The film features members of Racing With Pride, the network for LGBT+ people and allies in the sport that was launched in September, who share their experiences along with the inclusive message that 'Racing Is Everyone's Sport'.

Smith describes how she stayed away from racecourses for three years while transitioning as she "didn't know what to expect", but after first coming out to family and friends, and then publicly, she was not only encouraged to return but also compete in the saddle in the Jockey Club Challenge.

"Somebody mentioned to me, 'why don't you come back and ride as an amateur?'" says Smith. "And I turned up on the racecourse for the first time for 20 years as a jockey.

"I never thought you could get that buzz back again, but it was unbelievable. It was just like having my first ride all over again.

"I had a career for 17 years that I thoroughly enjoyed, with so many laughs, and I earned a living.

"To have trained racehorses, and then to transition, come back and get to ride again on a racecourse - and be accepted - I couldn't ask for more."

Williams describes gradually building his self-confidence and coming out to colleagues in racing, while Appleby explains how he has also found the sport to be more welcoming than he once expected.

Farrell-Thomas believes there is much greater awareness of what it means to be LGBT+ now than when she began her career in the industry.

"As a young woman starting working out in horse racing on the administrative side, I was definitely trying to establish my own true identity," she says.

"I found certainly that in racing, there are assumptions and languages used that perhaps wasn't always welcoming and wouldn't always allow people to be themselves."

Horses are horses - they don't know whether you're lesbian, gay, straight, transgender, they will love you for who you are.

Great British Racing, the marketing and promotional arm of what is the UK's second-biggest spectator sport, has worked on the film in collaboration with the Diversity in Racing Steering Group.

The Group, formed in 2017, aims to ensure everyone in British racing has the opportunity to achieve their potential and that fans from all communities feel welcome. It provides strategic direction, advice and support to the industry on inclusion.

Group member David Letts says the formation of Racing With Pride during the pandemic has been an important development.

"This year has been challenging for all, however research demonstrates that minority groups have been disproportionately affected during the crisis," he explained.

"As such, racing should be proud of the significant progress it has made to promote LGBT+ inclusion. Racing With Pride has been a great example of this work which has already proved most valuable to the industry's LGBT+ community and allies.

"Everyone in our sport should feel able to be their true selves without fear of discrimination and I believe we are moving in the right direction to achieve this."

Letts hopes the 'Racing Is Everyone's Sport' message plus the visibility and educational materials provided by the network will help to create more active allies.

"We know that allies play a crucial role in creating an inclusive culture across sport," added Letts. "The overwhelming response to both our e-learning module and Rainbow Ready resource pack has been really encouraging and shows the desire to engage across racing.

"This campaign offers the opportunity for the industry to celebrate our progress and stand together against discrimination and demonstrate unequivocally that racing is everyone's sport."

The visibility will extend to this weekend's racing when jockeys at Sandown Park, Aintree and Wolverhampton racecourses will be invited to wear rainbow armbands, while rainbow pin badges will also be available for racecourse staff and spectators to show their support to racing's LGBT+ community.