Neil Callan moved to Hong Kong in 2014 and rode 282 winners over seven-year stay; Callan, 42, is back in the UK to be with family and is looking forward to potentially reuniting with old friends Roger Varian, Kevin Ryan and Karl Burke 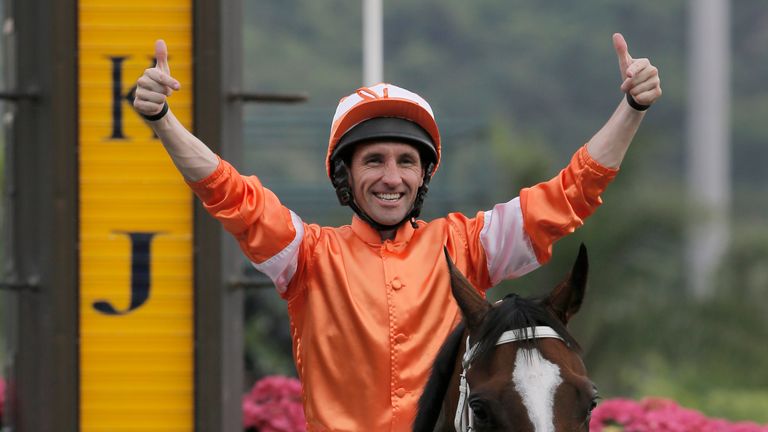 Jockey Neil Callan, known in Hong Kong as 'Iron Man', is keen to show how his years riding abroad improved his skills

Neil Callan believes he is heading back to the UK a better jockey than he left and is eager to prove himself against the best young stars.

Irish-born Callan, 42, ended an 11-year association with racing in Hong Kong this summer, returning to the UK to prioritise his family.

Having rode his first Hong Kong winner in 2010, Callan moved full-time four years later, riding a total of 282 winners for over £30m in prize-money and earning the nickname the 'Iron Man'.

"It's nice to be home," Callan told Sky Sports Racing. "I shifted my family off these shores and to Hong Kong, but didn't expect to be there for 10 years. I kept rolling and it kept getting better.

"My kids are a little bit older now and one of them maybe wants to be a jockey so we have to be in this country to be able to step forward. Now it's my turn to follow them.

"I feel very lucky with how things have gone. I've been riding for 20 years and Hong Kong is the hardest place I've ever ridden. It's sink or swim.

"It's the number one elite sport in Hong Kong and has made me improve my fitness and my diet. I feel like I've improved in every aspect.

"Jockey are athletes and you have to work like one. You have to move with the times."

Prior to his move to Hong Kong, Callan had built up some strong relationships with British trainers, including Kevin Ryan, Michael Jarvis, Karl Burke and Roger Varian.

Callan is looking forward to the prospect of reuniting with some old faces, while taking on plenty of new names on the track.

"I've kept in touch with a lot of my contacts that I had before," Callan said. "There are a lot of big owners who have contacted once they knew I was coming back. Hopefully we can rekindle those relationships and pick up as strong as we left.

"When you're doing this sort of job you need to make a living but coming back is more about proving myself and showing everybody that I've actually got better. I want to prove that I can hold my own.

"Of the generation that went before, Frankie is just about the only one left.

"I've kept in contact with British and Irish racing during my time away and there are some great young kids.

"There's a changing of the guard, but that's natural in any environment. It's something I'm ready for and looking forward to."