Charlie Hills duo The Attorney and Menai Bridge give Team Swish a double at Lingfield to move 10 points clear in the Racing League; watch raceday four at Windsor live on Sky Sports Racing on Thursday August 19 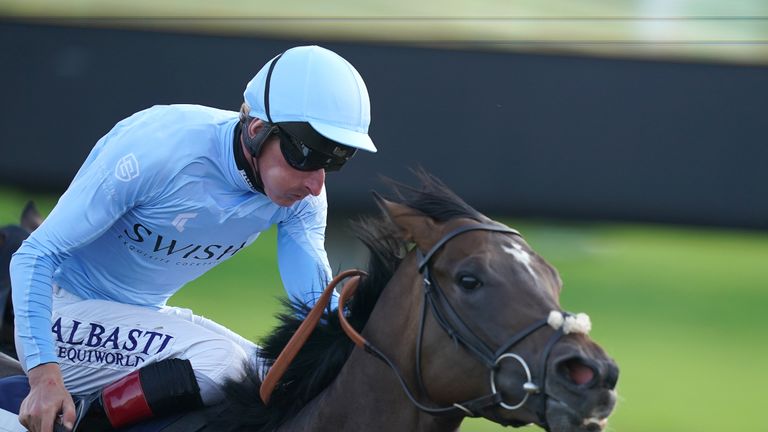 Derby-winning jockey Adam Kirby enjoyed victory on his Racing League debut as Team Swish moved into the lead at halfway.

Arriving at Lingfield fourth in the table after the opening two rounds, Team Swish added a maximum 25 points as Kirby, on just his second ride of the competition, steered The Attorney to win over seven furlongs, beating Team Arena's Mohareb in a thrilling finish.

Saffie Osborne then extended Swish's advantage at the top with victory on Menai Bridge in the penultimate race on Thursday.

Goat Racing, whose runner Jack The Truth had been narrowly beaten by Typhoon Ten, then went one better with Billhilly for Charlie Fellowes and jockey Louis Steward.

Steward again shot clear in the last, but Hugo Palmer's Red October ran out of steam and was eventually caught by favourite Lydford to give team talkSPORT their second winner of the competition.

Team Swish (188) lead ThoroughBid by 10 points as the Racing League heads to Windsor for raceday four next Thursday, live on Sky Sports Racing.

Osborne leads the individual rider rankings as a result of her performance and has racked up 132 points in total so far, one in front of Jack Mitchell.

"I'm going to go over the top here because it's so exciting, two winners and we are flying above the leaderboard, it's great!

"I have ridden both horses, I can't take credit for them but I'm going to tonight!

"They're such lovely horses, I am so thrilled and Saffie must be as well. "She has done amazingly, she's just absolutely flown and we've loved having her.

"We can give it over to Kieran Shoemark and Adam Kirby as well, we've got a great team.

"I'm hoping we can keep on flying up and if we dip down, we'll give others a chance and then throw it back at Newcastle."

Watch every race of the Racing League live on Sky Sports

Marco Ghiani was the victim of a heavy fall in the second race when his saddle slipped and he was unshipped from Stuart Williams' Papa Stour in the closing stages of the contest.

Thankfully the rider was not seriously harmed and was seen getting to the feet on the track, but did not take up his one remaining ride on the card.