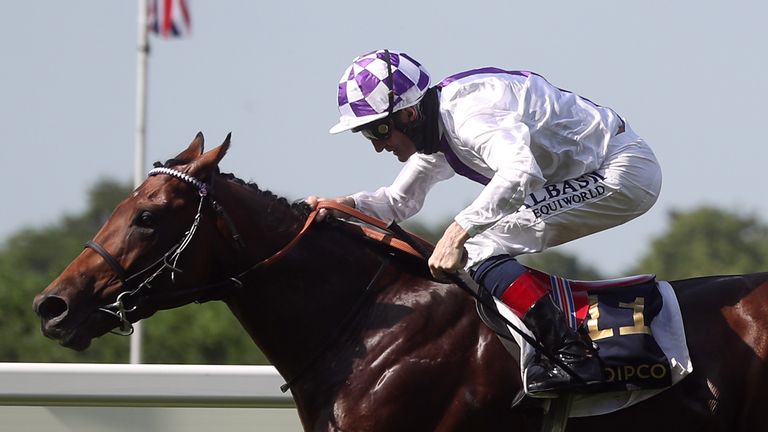 John Gosden is not expecting Palace Pier to get things entirely his own way as he faces an “elite” field in defence of the Group One Prix Jacques le Marois title.

Gosden's four-year-old returns to Deauville on Sunday, live on Sky Sports Racing, after recovering from a blood disorder that saw him miss the Sussex Stakes at Glorious Goodwood.

Jim Bolger's 2000 Guineas winner Poetic Flare, who found Alcohol Free one too good for him at Goodwood last month, looks the main danger to Palace Pier.

Gosden expects the better ground in France to suit both his son of Kingman and his leading rival.

"It'll be different conditions there this year, it's pretty dry and warm here and it looks an elite field," Gosden told Sky Sports Racing.
"Palace Pier is like most horses, he likes good ground to show acceleration.
"Poetic Flare is a huge threat. I don't think he was entirely in love with the ground at Goodwood but he's a phenomenal horse and has put in great performances to be the top three-year-old colt.

> "There's also Victor Ludorum in here. It's a very smart race indeed, but so it should be as the top mile race in France. "Palace Pier has been great this year and like his father, who also won this race, he's a grand horse."

Reflecting on Palace Pier's setback, Gosden said: "You could without those sort of things happening in the middle of the season. It wasn't ideal, but he seems fine and we have the late summer and autumn to look forward to. "He has taken hit time to get over it. We're just finding our way back, but he's worked well towards the race."

The Gosden yard also send Derab to Deauville for the Group Two Prix Guillaume D'ornano Stakes. The three-year-old son of Sea The Stars was down the field in eighth in the Prix du Jockey Club in June but bounced back by chasing home Royal Ascot winner Real World in the Listed Steventon Stakes at Newbury last month.

Looking back on Derab's effort at Chantilly, Gosden said: "He was drawn on the outside, way out, got a bump and never really got a run. When you get drawn on the outside there, it's pretty much a killer. "He ran a very nice race the other day [at Newbry] and was beaten by a pretty exceptional four-year-old. "He probably likes the ground on the easy side but it's the last three-year-old only race and we won it last year with Mishriff and it's very valuable."

Mishriff carries 'less of a burden' in St Mark's rematch

Mishriff remains on course for the Juddmonte International at York next week after an improved run at Ascot behind Adayar in the King George.

He is set to re-oppose Aidan O'Brien's St Mark's Basilica, who beat Gosden's four-year-old in the Coral-Eclipse at Sandown.

"We've not got quite as many pounds to give away and if it's faster ground and it being a flatter track will probably make the burden a little easier," Gosden said.

"Take nothing away from St Mark's Basilica, they're both Prix du Jockey Club winners.

"I thought our fella ran well the other day but he did need the race. He's in good order and we're happy with his work."

Asked whether Mishriff could be headed to the Breeders' Cup after York, Gosden said: "Who knows? One step at a time. All things are possible. Whether Del Mar is the perfect track for him would be another matter."

Stradivarius is all set to join Mishriff at York, with a run in the Lonsdale Cup.

Gosden is hoping the rain stays away after missing the Goodwood Cup due to soft ground conditions.

"Hopefully it doesn't pour down with ridiculously heavy rain, that would be helpful," Gosden said.

"We'd longed to run him at Goodwood, he adores the track, but sadly it was pretty waterlogged.

"We did stupidly and Ascot and

"He is getting older and that's not easy. Time will catch up with all of us."