Team talkSPORT have been crowned the first ever Racing League champions after a dramatic final day at Newcastle, with rider Jack Mitchell beating Hayley Turner to be top jockey.

Ace Rothstein picked up a vital 10 points in race two, finishing fifth, before talkSPORT and eToro Racing were involved in a dramatic dead-heat, with the judge unable to separate Bonneval and Delgrey Boy.

But, a fourth-placed finish for Mitchell and talkSPORT earned the team and jockey another 12 points and secured a double success.

Team talkSPORT ended the competition on 368.5 points, nine clear of eToro (359.5), with ThoroughBid finishing third on 351.

Mitchell finished on 276.5 points, well clear in the end from Turner (231) and Swish's Saffie Osborne (222), who missed her opening ride after car trouble on the way to Newcastle, but then won on Clive Cox's Tregony in the second race of the meeting.

Team Arena were able to climb off the bottom of the table, with Paul Mulrennan riding a double on Firmament and Saluti. 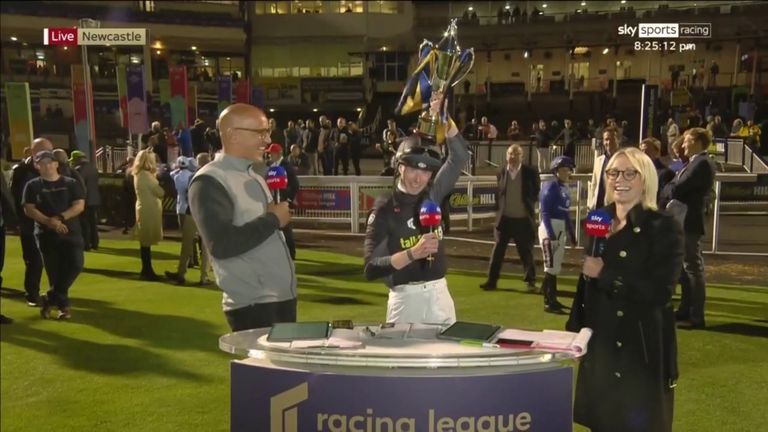 'I'm the Guardiola of the Racing League'

Team talkSPORT claim the winning bonus of £150,000, which was put on offer in addition to the £1.8m in prize money across the six meetings.

He said: "It's amazing - I've enjoyed every minute. It's something new and great for these horses for this sort of prize money. Team talkSPORT manager Rupert Bell is not letting anyone else near the Racing League trophy, for one night at least.

"It's not like F1 or the Premier League - the team table is changing all the time and it was exciting right until the end.

"I hope it's got a few more people involved. I think the lads in the weighing room are trying to work out how many beers I can buy - there's been beer orders, gin orders and champagne orders!

"I've had a lot of great support from the trainers of the horses I've ridden."

Rupert Bell, who managed the winning team along with fellow broadcaster Alan Brazil, told Sky Sports Racing: "I think it's been fantastic.

"I'm the Pep Guardiola of the racing manager world - Alan Brazil had absolutely nothing to do with it!

"I've been at every meeting and well done to the trainers and all their staff. Fair play to them."

Rupert's brother Michael Bell was was one of four trainers who saddled runners for the Team talkSPORT along with Ed Dunlop, James Fanshawe and Roger Varian. Between them, the Newmarket handlers will divide a bonus of £60,000.

Bell added: "You can't knock the stable staff getting £30,000 - that's fantastic. There'll be one hell of a party at Fitzroy House (Michael Bell's yard) - I better get invited!"