Jamie Snowden enjoyed two Grade Two victories last season, with Ga Law and Anythingforlove; Up For Parol heads for the Persian War at Chepstow on Friday; watch every race on the Jump Season Opener live on Sky Sports Racing, October 8-9 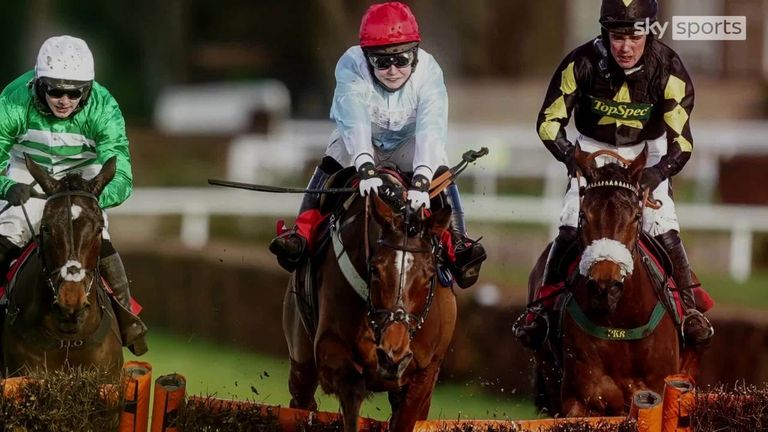 Trainer Jamie Snowden has his sights set on landing his first top-level prize this season after getting a taste for Graded success last term.

Ga Law and Anythingforlove were both successful in Grade Two races in the 2020/21 campaign, picking up the Rising Stars Novices' Chase and Jane Seymour Mares' Novices' Hurdle, respectively.

Snowden returns with a strong squad of horses this year, including Friday's Persian War hopeful Up For Parol and another exciting French recruit who could follow in stablemate Ga Law's footsteps.

Watch every race from the jump season opener meeting at Chepstow live on Sky Sports Racing on October 8-9, from 12.30pm

"He came to us in the middle of last season and we ran him three times and he won on two occasions.

"The first day we ran him at Doncaster he was a bit like a boy in a sweetshop over two-and-a-half miles.

"We dropped him back to two miles but through the Autumn I'm sure he does want to go back up in trip. His pedigree all suggests stamina.

"His nickname is 'Pete the pony' because he's not overly big but he's got an engine and jumps really well."

"He's a lovely four-year-old French horse by Coastal Path. He finished second in a couple of bumpers and then won a novices' hurdle.

"He has a similar kind of profile to Ga Law before he arrived with us.

"We're going to go four-year-old novice chasing with him this year. You get a great weight-for-age allowance and this side of Christmas it's certainly useful.

"He jumps fences really well and works nicely. I think we'll go to Wetherby for a novice chase on October 13 with half an eye on the Rising Stars at Wincanton after that."

"She's won five of seven and was very good over hurdles, winning a Grade Two down at Sandown with a really good performance in the mud over two-and-a-half miles.

"She's going chasing this year and in time, as the season progresses, will step up in class.

"She's a Black Sam Bellamy horse so loves soft ground. She's a sister to Sizing John [Gold Cup winner] so I'm sure she'll want to go up in trip."

"He's developed into a lovely strong horse. He's always been very talented but not had the cleanest run through.

"He's had two bouts of Colic so had no summer at all last year. Thankfully, he's done really well this time around.

"He ran some good races last year without getting his head in front but it means he retains his novice status over fences this time around.

"He's got plenty of experience and should start off in the Listed Novices' Chase at Chepstow on Saturday. He might be one for the Paddy Power Gold Cup [at Cheltenham in November]."

"He's been a star and has nearly 50 per cent strike rate.

"He didn't take to chasing. I'm not sure whether he had the 'oomph' for jumping fences but he's a very slick hurdler.

"He just needed a run back over hurdles to get his confidence up at Newton Abbot and ran very well to finish second at Worcester last week."

"When you've had one big success, you want the next one, it's the same whether you're a jockey, an owner or a trainer.

"We're churning out plenty of winners now which is great, including a couple of Grade Two winners last year.

"It'd be lovely to think about a Grade One winner at some point. That'd be the aim and hope going forward.

"You always want to do better than previous years and keep that progression going upwards. Thankfully it's been going that way."