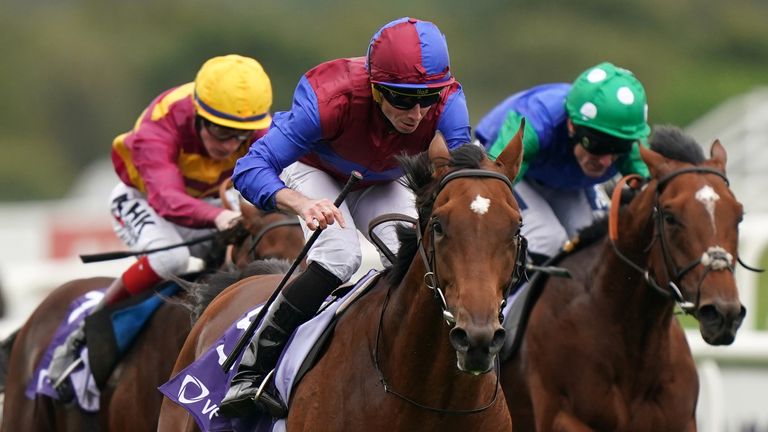 Trainer Aidan O'Brien says Vertem Futurity winner Luxembourg could start next season with a shot at a Classic in the 2,000 Guineas at Newmarket

Luxembourg proved himself as a leading contender for next year's Classics after an impressive victory in the Group One Vertem Futurity Trophy at Doncaster.

The two-year-old, who started as 4/6 favourite, was given a confident ride under Ryan Moore, producing a challenge at the three-furlong pole before going away to win by just under two lengths from Sissoko, with Bayside Boy and Hannibal Barca finishing in a bunch for the places.

Luxembourg remains unbeaten from his three starts as a two-year-old, having picked up the Group Two Beresford Stakes at the Curragh last time out.

Saturday's victory has earned the exciting son of Camelot odds of 5/1 for next year's 2,000 Guineas at Newmarket, while he was made 4/1 favourite for the Derby at Epsom.

Asked if he might follow the same path as his father and head to the Guineas, O'Brien told Sky Sports Racing: "He has all the things that you want to see in a horse. Hopefully we'll get through the winter well and then the lads will see what they want to do.

"It's very possible that he could start in the Guineas. It's a nice thing to be thinking about.

"We were delighted with him. He's a lovely big cruiser.

"He's still a bit of a baby but Ryan said he was going very easy down to the first-furlong marker and for a horse to be doing that on just his third run you'd have to be very impressed. "He's a great mover and very clear-winded so he has all the things you need and is going to be very exciting, hopefully.

"He's been very classy. We've only asked him to do about 70 per cent of what he can at home so it was great to see him do it today. That was a big step up."

"I lost my cover at halfway and had to keep going but he took me to the front without me asking. I tried to wait a bit but when I grabbed hold of him, he went and found more.

"He's had three races and three wins and we're delighted with what he's done.

"He's an exciting horse to look forward to. It certainly could have gone smoother today so I think there's more improvement in him."

Bayside Boy to be aimed at 2,000 Guineas

Wayne Lordan was delighted with the performance of runner-up Sissoko, saying: "Donnacha has always thought he was a very nice colt.

"He only won his maiden a week and a bit ago. It was a huge step up, but he looked like he could run very well and Donnacha was duly right.

"He feels like he's going to be a better three-year-old. It was a very good run going into the winter with prospects for next season."

"He was a touch unlucky. When he needed room he didn't have any. I don't think it stopped him winning, but he'd have been a good second with a clear run.

"We'll winter him and aim him at a Newmarket Guineas because I think he deserves that."