The two hurdling stars looked set to contest the Punchestown Champion Hurdle but trainer Nicky Henderson and owner Michael Buckley have confirmed that Constitution Hill will not run; the novice looks set to be put away for a tilt at the Champion Hurdle next season

Hopes of a dream clash between Supreme Novices' Hurdle winner Constitution Hill and unbeaten Champion Hurdler Honeysuckle at Punchestown have been dashed.

The race between arguably jump racing's biggest star and most exciting horse in training looked on earlier this month when Michael Buckley, owner of Constitution Hill, gave his five-year-old an entry for the Punchestown Champion Hurdle as well as the novice equivalent.

This followed his devastating performance in the Supreme Novices' Hurdle, where he defeated subsequent Aintree winner and stablemate Jonbon by 22 lengths at the Cheltenham Festival.

But despite a £100,000 bonus thrown in by Paddy Power if a British horse defeated Honeysuckle in the race, the Nicky Henderson team could not be tempted and confirmed on Monday that he has had his final run of the season.

Owner Michael Buckley told Sky Sports Racing's Matt Chapman: "I saw him this weekend, and Nicky Henderson and I think it's right.

"He looks ready for the field for now." 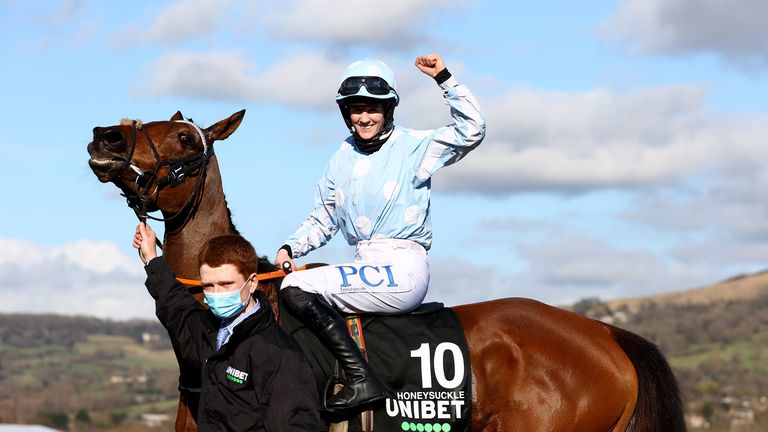 Sky Sports Racing's Matt Chapman and Jamie Lynch argue the case that Honeysuckle's mares' allowance has become a hindrance at Grade One level.

Nicky Henderson also told the Nick Luck podcast: "We'd been umming and ahing for a good fortnight now. It was very tempting but we had the horse all prepped up for Cheltenham. Bear in mind he's still a big, quite raw, five-year-old. He's only had three races in his life. His future is so big.

"I think he can be a better horse, more built up and stronger, in a year's time and I'd rather finish on a good note with it all in front of him. There's all the time in the world to meet Honeysuckle and hopefully it will be in March.

"Constitution Hill will definitely stay over hurdles. He can have a proper campaign next season but to go over there and do this against what is undoubtedly a very, very good mare wasn't something in his interest or to his benefit."

However, Henderson also added that Champion Hurdle second Epatante could still provide Honeysuckle with her most serious threat, while Mares' Hurdle winner Marie's Rock could run at the intermediate distance.

"It is possible Epatante will run, though," Henderson added. "She's going to go over there. There is a mares' two-and-a-half mile hurdle and Marie's Rock will run in that, while Epatante might go either way yet."