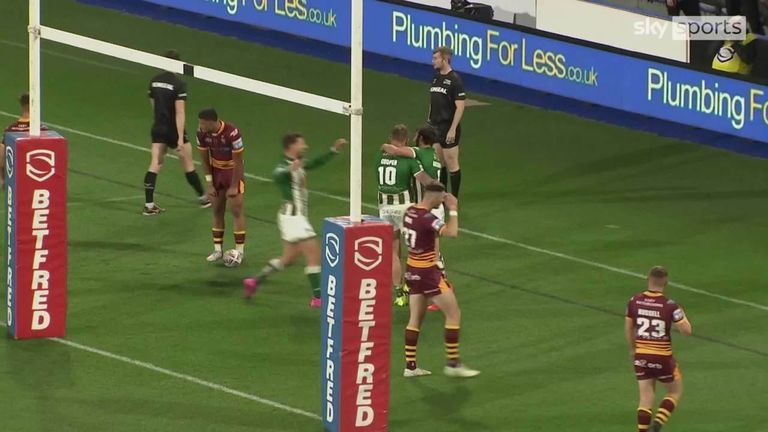 Mamo registered his 13th and 14th tries of a dazzling campaign in 11 first-half minutes as Steve Price's visitors gave an emphatic response to their defeat at struggling Wakefield last time out.

Giants were 26-20 winners when the sides met at the Halliwell Jones Stadium back in May.

But once Mamo scored his first try against the run of play, home chances of a league double quickly unravelled.

Mamo had already come to Wire's rescue on his own try line, hacking clear under pressure from Josh Jones.

Ratchford kicked the first of his goals to make it 6-0. Wakefield bound Tom Lineham also crossed the home line but his joy was short-lived as referee James Child adjudged Ratchford's pass was forward.

There was no dispute about Warrington's second touchdown after 28 minutes.

Huddersfield's midfield defence fell away and Gareth Widdop broke through but did not have the legs to outrun the cover from halfway after collecting Will Pryce's grubber.

However, Mamo was too speedy for Jake Wardle's eventual tackle to increase his hopes of finishing the competition's top try scorer. Ratchford goaled from the touchline.

Chris McQueen did well to drag down Mamo before Castleford bound Mamo completed his hat-trick. But he held on to the Wire dangerman too long and paid with a sin binning. Ratchford kicked the penalty to give the visitors a 14-0 interval lead.

McQueen returned with no addition to the score but no hint either of eating into the Wolves' commanding lead.

It was game over 12 minutes from time as prop Mike Cooper latched onto Widdop's grubber kick and touched down by the posts. Ratchford converted to make it 20-0.

But the last word belonged to Warrington as King ended a final Wire attack to score his team's fourth try.