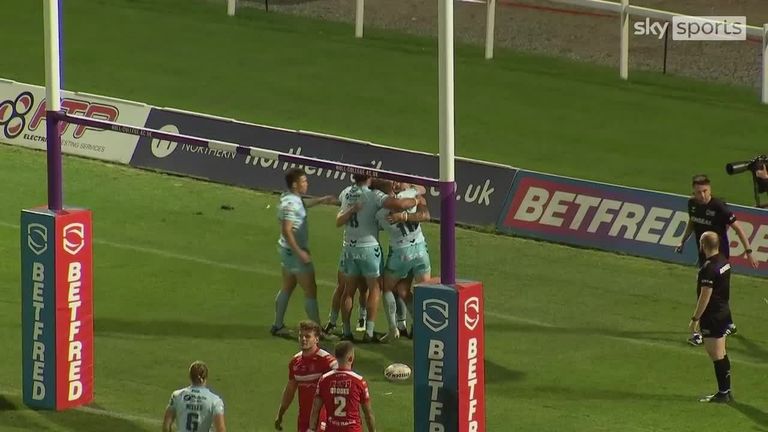 Struggling Wakefield, one place off the foot of the table, did the double over their higher-placed opponents who failed to bounce back from a single-point defeat to city rivals Hull FC last time out.

Rovers looked unlike the team that had forced their way into the top six and suffered a disappointing defeat against a side well marshalled by scrum-half Mason Lino, who converted all four of his side's tries.

The home side made a fast start with the game's first try but had no answer in the second half to Wakefield's response.

Rovers claimed the first try after four minutes as Luis Johnson crashed over from close range, with Ben Crooks adding the extras for a 6-0 lead.

Rovers should have had a second try but Jimmy Keinhorst could not get hold of Greg Minikin's pass with the line at his mercy with 20 minutes on the clock.

Rovers exerted concerted pressure on the Wakefield line and finally got the second try their dominance deserved as George Lawler exploited a gap when Brad Takairangi offloaded 15 minutes before the break.

Wakefield needed a response and Jacob Miller provided it as he ran in from a pass by Kelepi Tanginoa, with Lino's conversion reducing the deficit to four points with half an hour gone.

They were given a gift when Mikey Lewis' kick for touch went out on the full but a knock-on handed the ball back to the home side, only for the favour to be returned shortly after.

Takairangi was penalised for tackling a player off the ball and Wakefield made him pay as Ryan Hampshire won the race for Lino's grubber kick to touch down as half-time approached.

Lino's kick put the visitors ahead for the first time at 12-10 and they held that advantage to the break.

Wakefield started the second half on top as the Rovers defence started to creak but they managed to release the pressure as David Fifita took the wrong option as he passed forward when he should have gone alone just short of the line.

Crooks levelled the game back up with a penalty for the first points of the second half eight minutes after the restart.

Wakefield reclaimed the lead when they pounced on a loose ball from Takairangi and Tom Johnstone set up Innes Senior to run in and score under the posts for the visitors' third try, Lino kicking the conversion to make it 18-12.

Rovers were in disarray and Wakefield's fourth try came from Jay Pitts as he slid in following Lino's pass, with Lino's fourth kick doubling their advantage to 12 points with a little over 20 minutes of the game remaining.

Rovers responded with a try from Crooks and he added the extras to bring his side within a converted score of their opponents.

Rovers kept Wakefield pinned in their own half for most of the final 10 minutes but despite their best efforts they were struggling to break down the visitors' defence.

Miller's late drop-goal with a little over a minute to go made the game safe and sent the home fans in a crowd of 6,439 heading for the exits.

It got worse for Rovers as forward Dean Hadley suffered a shoulder injury which saw him go off in the final minute.