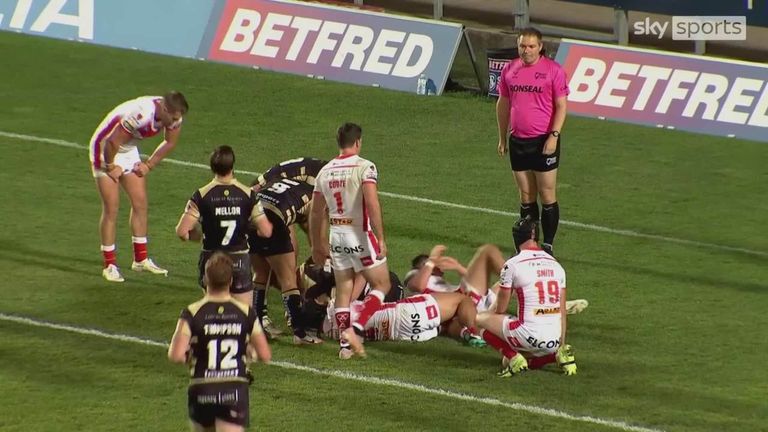 St Helens' Grand Final hero Jack Welsby was Leigh's chief tormentor as the Centurions were unable to kick on from their first win of the season as they suffered a 42-12 defeat.

Welsby helped himself to a brace of tries and had a hand in two others as the defending champions outscored the bottom club seven tries to two.

In a pulsating and bruising first half, Leigh more than matched Saints but they went in 12-6 behind despite having a lot of possession.

An early Regan Grace try and a penalty from Lachlan Coote saw the Saints lead 8-0 but the visitors refused to lie down and they had plenty of chances to score before Matty Gee barged over to reduce the deficit to two.

Leigh continued to take the game to St Helens but a lapse in concentration, eight minutes before half-time, saw Welsby cross over to give them a six-point advantage at the break.

Second-half scores from Welsby, Sione Mata'utia, Coote, Joe Batchelor and Lewis Dodd saw Saints make it back-to-back wins in the Betfred Super League, although the Centurions did manage a second try of the night through Adam Sidlow.

It took Saints just three minutes to open the scoring. They marched into Leigh's half on the back of a penalty and a set restart before Coote sent over a looping pass for Grace to touch down in the corner.

Coote added the extras from the touchline for a 6-0 advantage.

The away side came close to levelling matters when Ryan Brierley kicked early in the tackle count but the ball ran dead before Ben Hellewell could ground it.

The Centurions were refusing to lie down and Matty Russell picked up a loose ball near his own line to race 40 metres before being brought down.

A penalty for a late tackle put Leigh in great field position, but they were unable to take advantage as another kick from Brierley was swooped upon by Jonny Lomax.

Leigh were enjoying a lot of possession in the St Helens half but they lacked the quality to cause any real problems.

A barnstorming run from Alex Walmsley put Saints in try-scoring territory before they received a penalty for a high shot on Coote. The full-back got off the floor and slotted over the resulting kick for an 8-0 lead.

A knock-on from Kevin Naiqama gave Leigh another shot at the Saints line and - after receiving another set - they finally made the breakthrough as Gee collected a short pass from Liam Hood to barge over and Brierley converted.

St Helens finished the first half the strongest with Welsby going over after neat work from Mata'utia but Coote was unable to add the extras.

Leigh needed to score first in the second half to have any chance of upsetting the Saints, but it was the home side who extended their lead as Welsby was on to pick up a deflected kick from Coote to grab his second. The full-back converted and Saints looked comfortable at 18-6.

The hosts were finding gaps everywhere now and Grace went close with a fine break down the left, although they were dealt a major blow when Lomax was led from the field with a leg injury.

An error from Grace gave Leigh a chance to close the gap and they did that with Sidlow forcing the ball down from close range with Brierley adding the goal.

Saints responded straight away with Mata'utia showing some neat footwork to go over for their fourth try as Coote fired over the conversion.

Leigh were starting to tire now Coote went over following some good work and a neat offload from Welsby.

Welsby was involved in everything and it was his final ball that saw Batchelor touch down before Dodd finished off the scoring with a try of his own and Coote added the extras.