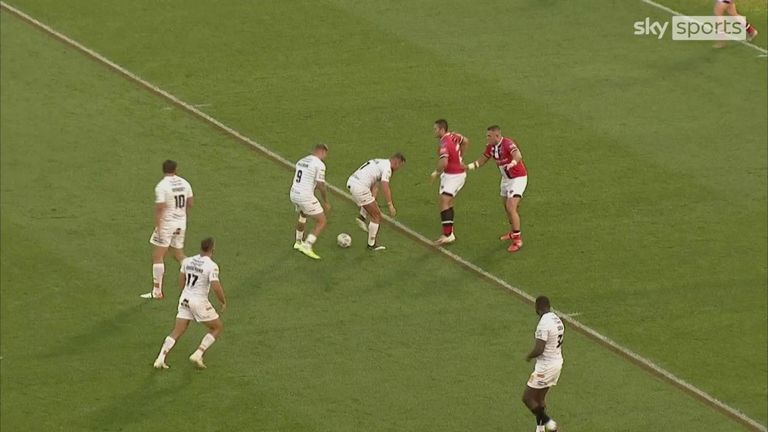 Catalans Dragons strengthened their grip on top spot in the Betfred Super League with their first win against Salford Red Devils at the AJ Bell Stadium since 2016.

Benjamin Julien scored twice in the first half and James Maloney kicked seven goals as the Dragons impressively controlled the game almost from start to finish to run out 42-14 victors.

Catalans have lost just twice in Super League this season and called off their previous game at Warrington a week ago at short notice due to Covid issues, while Salford played as recently as Sunday.

The French team were certainly the sharper and quicker of the two teams in the opening exchanges and Julien claimed his first try in the 10th minute after taking a well-timed pass from Maloney which gave him a clear run to the tryline from 10 metres. Maloney could not convert.

Salford, who in their last outing became the first team to be beaten by Super League's bottom club Leigh Centurions, crafted a promising opening in the 17th minute when a Chris Atkin kick to the corner created panic in the Dragons defence but Rhys Williams could not get a pass away to the supporting Dan Sarginson.

Julien got his second try 14 minutes before half-time and it was a simple score, picking up a loose Salford pass and racing 40 metres to the tryline. Maloney added the conversion to make it 10-0.

With three minutes of the half remaining, Salford got off the mark.

Danny Addy and Tui Lolohea combined well with ball in hand to create an opening for Harvey Livett to charge through and score in the corner.

Krisnan Inu's conversion reduced the deficit to 10 however they were hit with a sucker punch seconds before half-time when Dragons forward Sam Kasiano thundered over after hitting a short ball at tremendous pace. Maloney's goal made it 22-6 to the visitors.

Salford started the second half brightly, with Sarginson winning the race to ground the ball after successive kicks ahead by Atkin and Williams. Inu was unable to add the goal.

A high tackle by Catalans hooker Michael McIllorum on Salford's Ryan Lannon in the 46th minute resulted in a yellow card for the visitors. But despite being a man down, Catalans, who had lost on their last four visits to the AJ Bell Stadium, added to their lead thanks to a Maloney penalty.

Some quick passing along the line ended with winger Tom Davies scoring Catalans' fifth try in the 57th minute and Maloney converted brilliantly from touch to make it 30-10.

Joe Chan cashed in on some indecision in the Salford defence after a high kick from Tomkins to score Catalans' next try and Maloney made no mistake with the conversion.

With the game stuttering to a finish, Salford claimed their third try through former Catalans full-back Morgan Escare, although Inu was unable to convert.

As the hooter sounded, Catalans claimed their final try when Samisoni Langi went in from close range and Maloney slotted over the goal.