Joel Tomkins was sin-binned for a series of punches, thrown in retaliation following a headbutt on his brother Sam by Wigan full-back Zak Hardaker on Saturday; Hardaker was given a two-match ban by RFL

Catalans Dragons forward Joel Tomkins has been given a four-match ban for punching during his side's 48-0 Super League win over his old club Wigan.

The 34-year-old was sin-binned for the series of punches, which were in retaliation following a headbutt on his brother Sam by Wigan full-back Zak Hardaker towards the end of the game in Perpignan on Saturday.

Hardaker, who was sent off, was subsequently given a two-match ban for what the Rugby Football League's match review panel said was a Grade C offence. 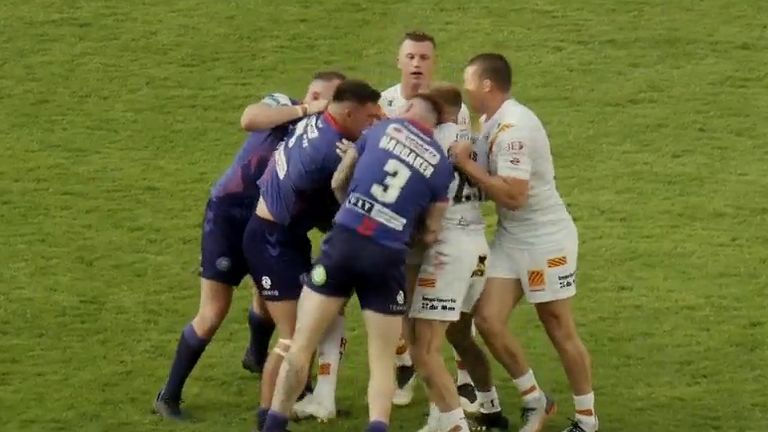 Zak Hardaker received a two-game ban for his headbutt on Sam Tomkins, while Joel Tomkins has been given a four-match for throwing punches in retaliation

Tomkins was charged with a more serious Grade D offence, which the panel described as "sustained, repeated or violent" punching, and normally carries a ban of between three and five matches.

The player entered a guilty plea when he faced a tribunal hearing on Tuesday evening but challenged the grading of the offence.

However, the tribunal found the grade to be correct and, in addition to a four-match ban, he was fined £500.

It was only his fifth game back from an eight-match ban carried over from last season after he was found guilty of "inappropriate contact" on the backside of Leeds full-back Richie Myler.

Meanwhile, Castleford forward George Griffin will miss Saturday's Challenge Cup semi-final against Warrington after a one-match ban for a dangerous tackle in his side's 60-10 home defeat by Leeds was upheld on appeal.