Serena Williams gives her reaction to Naomi Osaka's withdrawal from the French Open, saying: "I feel like I wish I could give her a hug because I know what it's like"; the world No 2 pulled out due to the furore caused by her boycott of media duties and her struggles with depression 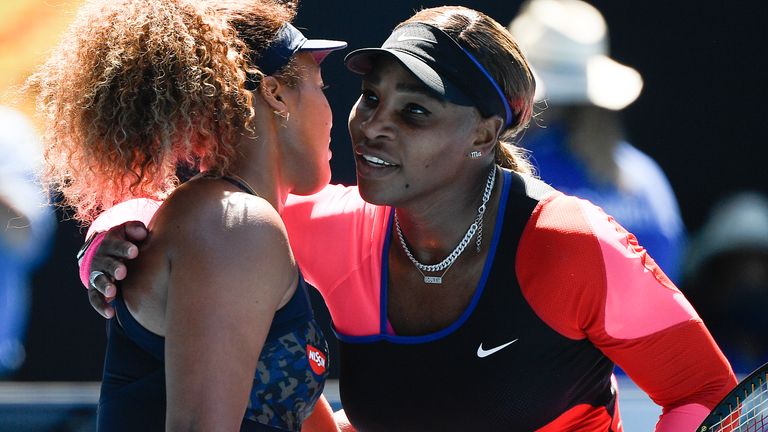 Serena Williams only found out about Naomi Osaka's withdrawal after winning her first-round match at the French Open, but wishes she could giver her "a hug".

The 39-year-old American made a winning start to her Roland Garros campaign defeating Irina-Camelia Begu in straight-sets, before learning of Osaka's withdrawal en route to her press conference.

Osaka had refused to take part in press conferences or interviews and the 23-year-old was threatened with disqualification and a ban from future tournaments if she did not reconsider.

The world No 2 pulled out before opening up about her struggles with depression dating back to her first Slam title in 2018 when talking to the media triggered anxiety.

"Honestly I just found out before I walked into the press conference, so that's the extent of it right now for me," said Williams, who is pursuing a record-equalling 24th Grand Slam title in Paris.

Pushed for her opinion on Osaka's claim last week that post-match media conferences were damaging her mental wellbeing, and Monday's unexpected development, Williams said: "The only thing I feel is that I feel for Naomi. I feel like I wish I could give her a hug because I know what it's like. I've been in those positions.

"We have different personalities, and people are different. Not everyone is the same. I'm thick. Other people are thin. You just have to let her handle it the way she wants to, in the best way she thinks she can."

Williams, who will face Romanian Mihaela Buzarnescu in the second round, also spoke about mental health issues off the court.

The three-time French Open champion believes it is important for players to have someone to use as a "sounding board" in tough times.

"I feel like there is a lot of articles that they put out. I think you really have to step forward and make an effort, just as in anything. You have to be able to make an effort and say, I need help with A, B, C, and D, and talk to someone," said Williams.

"I've been in that position, too. I've definitely had opportunities to talk to people, kind of get things off my chest that I can't necessarily talk to anyone in my family or anyone that I know.

"For me it's important to have awareness and make that step."