Alexander Zverev says he would deserve to be suspended if he violates the probation handed down to him for his outburst at the chair umpire in Acapulco; Rafael Nadal calls for stiffer penalties for players 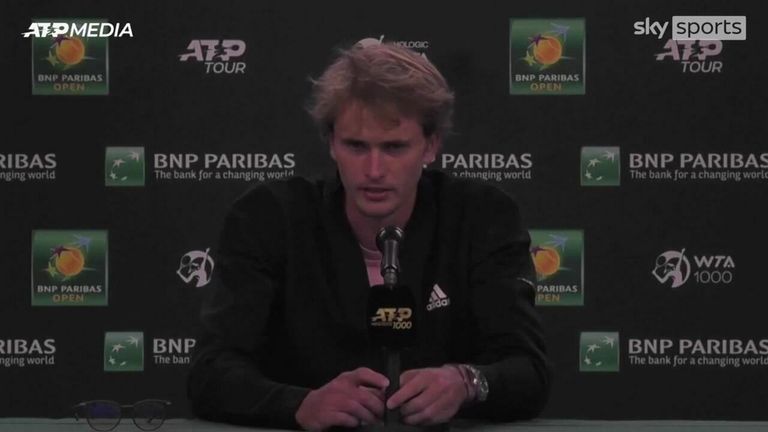 Alexander Zverev has described his Mexican Open meltdown as "the worst moment of my life".

The Olympic gold medallist was thrown out of the tournament last month and fined 40,000 US dollars (approximately £30,000) after aggressively and repeatedly striking the umpire's chair just below the official's feet having lost his cool over a line call during a doubles match.

An ATP review found Zverev guilty of a major offence and he will serve an eight-week ban if he behaves in a similar way at any tournament over the next year.

"It still is embarrassing for me now," said the world No 3. "Walking around the locker room, it's not a nice feeling. But we all do mistakes. I'm also a human being, and I can guarantee you I will never act this way again in my life. It was definitely the worst moment of my life."

Zverev was speaking ahead of his opening match at the BNP Paribas Open in Indian Wells, which got under way on Wednesday.

Some were surprised the German escaped an immediate ban and Rafael Nadal has called for stiffer penalties for players lashing out at umpires, concerned that type of on-court behaviour is damaging the sport.

"I have a good relationship with Sascha, I like him, I practise with him very often, so I wish him all the very best - and he knows that he was wrong and he recognized that very early and that's a positive thing," Nadal said.

"On the other hand, if we are not able to control this type of attitude on court, not just this one instance in particular, there has been other stuff going on in the last couple months.

"If we are not able to penalize these types of attitudes in a little stronger way, then we as players will feel stronger and stronger all the time. In this sport, we have to be a positive example, especially for the kids." Rafael Nadal has called or tougher punishments for abuse of officials after Zverev avoided a ban.

The 21-time Grand Slam champion said "we need to be a positive example".

Both main draws are headed by players in this position, with Russian Daniil Medvedev competing as world No 1 for the first time while Aryna Sabalenka of Belarus is the highest seed in the women's event following the withdrawals of Ashleigh Barty and Barbora Krejcikova. Medvedev said of playing under a neutral flag: "I want to promote my sport, I want to promote what I'm doing in my country for sure, and right now the situation is that that is the only way I can play."

Asked if he feared being banned, he added: "Tennis is probably one of the most individual sports we have in the world. Everyone's living in so many different places. There's always a possibility, but I hope not."

Sabalenka expressed her dismay at the situation in Ukraine, saying: "I feel really sad and really bad about Ukrainian citizens who lost their homes in the war. I just hope for peace."

British players remain unbeaten so far, with qualifier Harriet Dart moving through to a second-round meeting against Ukrainian Elina Svitolina, while Heather Watson and Katie Boulter are both in action later on Friday.

Emma Raducanu will take on France's Caroline Garcia on Friday night provided after defying predictions to recover from a leg injury.

The US Open champion suffered the problem in a marathon match in Mexico two-and-a-half weeks ago and feared she would have to miss the BNP Paribas Open, one of the biggest tournaments on the WTA Tour.

In his first match, wild card Andy Murray will meet Japan's Taro Daniel for the third time this year having lost at the Australian Open then claimed some revenge in Doha last month.