Defending champion Novak Djokovic and 13-time winner Rafael Nadal eased into the third round of the French Open, while Carlos Alcaraz is also through after surviving a match point during a five-set epic.

World No 1 Djokovic, playing in his first major of the year, hit 40 winners and 10 aces during a purposeful performance on Court Suzanne-Lenglen as he overcame Alex Molcan 6-2 6-3 7-6.

Nadal, meanwhile, breezed past France's Corentin Moutet 6-3 6-1 6-4 in the night encounter - his 300th match victory in a grand slam and 107th at the French Open - to remain on course for a meeting with Djokovic in the quarter-finals. 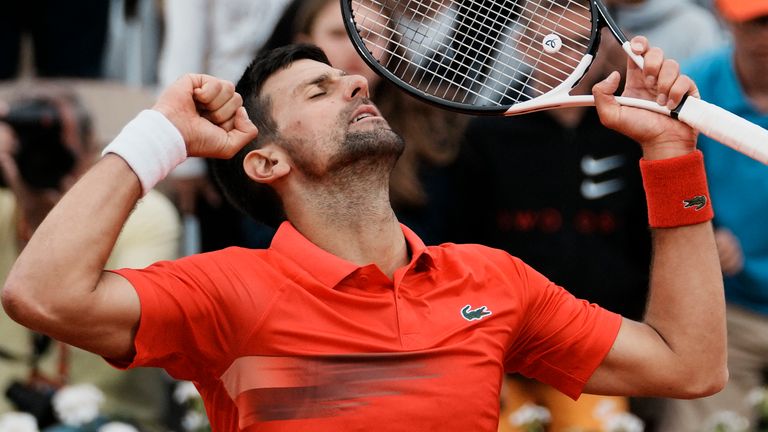 I'm pleased with the way I'm feeling on the court, the way I have been striking the ball. Playing against a specialist on clay, someone that is a tricky opponent, it was never going to be an easy match, but I thought I performed very well. Everything is going in the right direction.

Novak Djokovic on his second-round victory

Alcaraz, the form player of 2022 having won four titles and risen to sixth in the world rankings, had a more arduous path into the third round with the 19-year-old surviving a match point in the fourth set against fellow Spaniard Albert Ramos-Vinolas and slipping 3-0 down in the decider.

Alcaraz cantered through the first set 6-1 but then lost the second 7-6 and slipped two sets to one down when Ramos-Vinolas took the third 7-5.

The teenager, 15 years younger than his rival, saved match point in the 10th game of the fourth set and eventually took it on a tiebreak, while he rallied after a poor start to the fifth and final set to win it 6-4 and set up a third-round meeting with Sebastian Korda.

Alexander Zverev saved a match point before triumphing over Sebastian Baez 2-6 4-6 6-1 6-2 7-5 in a thrilling contest on Court Philippe-Chatrier.

The two players battled for three hours and 36 minutes with Zverev having to use every ounce of his experience to get past his 21-year-old opponent.

Baez, who is ranked 36 in the world, created his match point opportunity on the Zverev serve, but the German pulled out a big first serve to erase it and took control from that point.

"I said to him that how he feels now is the worst you're going to feel on a tennis court," Zverev said about his exchange with Baez at the net.

"It was such an incredible match. I know how it feels, as I lost the US Open final from being two sets to love up. I was two points away from winning it and I lost 7-6 in the fifth.

"You always get better from it. I wish him nothing but the best, he's an unbelievably great kid and he's going to do a lot of great things in this sport."

Zverev, who was a semi-finalist at Roland Garros last year, will face Brandon Nakashima of the United States in the third round.

Sakkari out, Gauff and Azarenka progress

Sakkari, a semi-finalist in Paris last year, never found her groove on Court Suzanne-Lenglen and her opponent took the chances that were presented to her.

The Greek follows Tunisia's Ons Jabeur (6) and defending champion Barbora Krejcikova (2) in exiting the tournament after they departed in the first round.

Coco Gauff advanced to the third round by beating Alison van Uytvanck of Belgium 6-1 7-6 (7-4).

The 18-year-old is trying to improve on her quarter-final run at Roland Garros last year, which is her best result at a Grand Slam.

Gauff twice fell behind in the second set but broke back on both occasions. The American then forced three errors from Van Uytvanck in the tie-break.

Gauff is the youngest player remaining in the draw and celebrated her high school graduation this week with pictures at the Eiffel Tower.

Azarenka, who is the 15th seed, produced a clean match by hitting just 13 unforced errors in comparison to Petkovic's 42. She has twice won the Australian Open and was a semi-finalist at Roland Garros in 2013.

While the US Open champion Emma Raducanu lost in the second round to Aliaksandra Sasnovich, her opponent in the final at Flushing Meadows - Leylah Fernandez - breezed through against Katerina Siniakova 6-3 6-2.

Fernandez is being tipped to go deep into the tournament, although she said: "Honestly this is the first time I'm hearing about this.

"But I'm just focusing on my own game. I have been trying to improve my game every single day, trying to get to a level where I think is deemed to be here at a top-level.

"I think my team and I were doing a good job, just trying to improve every day and not thinking about wins and losses or any external voices."