The Japanese star, who turns 21 on Sunday, admits she has struggled to cope with expectations after claiming her maiden Grand Slam title at the US Open in September, which was marred by Serena Williams' explosive row with the chair umpire.

Osaka rose to a career-high ranking of world No 4 on Monday after reaching the Pan Pacific Open final and China Open semi-finals in her two tournament appearances since her success at Flushing Meadows.

"I believe with her abilities and strength, she can win many [Grand Slam titles] - that is if she really has the desire to be a champion," Li said about Osaka, who pulled of this week's Hong Kong Open with a back injury.

Osaka followed Li, who won the French Open and Australian Open before retiring in 2011, as only Asia's second Grand Slam singles champion and will make her debut appearance at the season-ending WTA Finals in Singapore later this month.

"I think it makes me happy that Li Na talks about me!" she said.

"For me definitely I don't want to stop at just one Grand Slam, of course I want to win more, but right now it's not the Australian Open, it's Singapore [that I] have to look forward to."

With the season coming to a close, Osaka says she has further history in mind as she aims to become the highest ranked Japanese woman in the game - having started the year as world No 68.

"I'm very excited about it," Osaka said. "I know that Kimiko (Date) was number four too so that means we're tied.

"For me the year's not done yet so I want to keep playing and see how far I can get."

Further ahead, and Osaka is eyeing more success on the big stage when Tokyo hosts the Olympic Games in 2020. 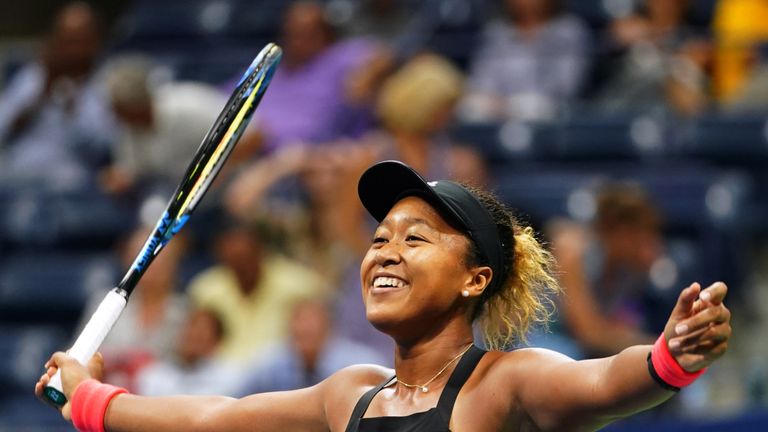 Naomi Osaka on 2020 Olympics in Tokyo

"Everyone is really excited in Japan for the Olympics. I know that everyone - all the Japanese players - wants to do well and of course I share that same feeling."

She added: "I really want to experience the moment and at the same time I know I want to win the gold medal - everyone who plays in the Olympics wants to win gold - so that would be my aim, but [also] overall just to have fun."

Sky Sports will have coverage of the ATP Finals in November with every match live on Sky Sports.

How to receive all the latest tennis news straight to your mobile.