Roger Federer remains as determined as ever for success on the highest stages but with further history on the line the Swiss great appears relaxed by the opportunity in front of him at the Australian Open.

The evergreen 37-year-old defending champion will target a third successive title at Melbourne Park over the next fortnight and victory on January 27 would see him win the Grand Slam for a record seventh time.

Federer is also one title away from a career 100th success but is well aware it will not be an easy task, with long-time rival Novak Djokovic also seeking to move one clear of fellow six-time champion Roy Emerson.

Much of the pre-tournament discussion has focused around Andy Murray's imminent retirement and whether the season's opening Grand Slam could see a new name lift one of the sport's coveted trophies.

Federer's record in Melbourne and his confident demeanour at Thursday's draw for the men's singles suggested he is here with one aim - to win once again! 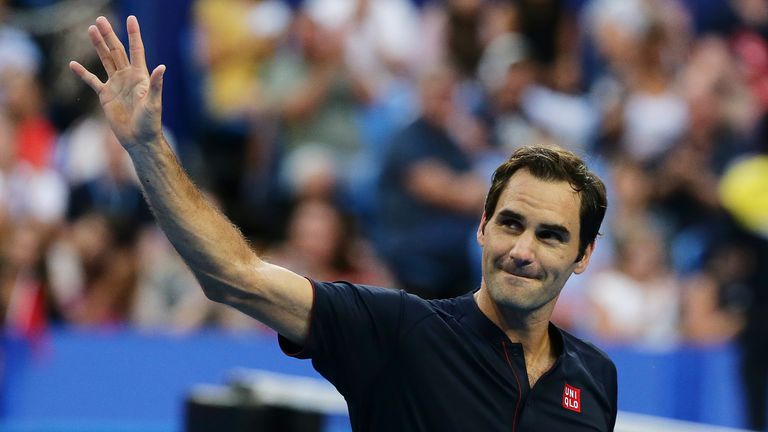 If it were to happen with me defending my title then sure I would take it. That would be gladly accepted.

Roger Federer on prospect of winning his 100th career title

"I could live happily ever after with 99 too but if you are so close and knowing I am going to be playing this season I will give it a go!

"Every tournament I go to people might talk about it, like we are talking about it right now. Again [it is a case] of not thinking too far ahead.

"But sure if it were to happen with me defending my title then sure I would take it. That would be gladly accepted.

"I will give it all I have but reaching one hundred would be something truly very special for me."

Federer was not given any favours with the draw, with the world No 3 drawn in the same half as Rafael Nadal and potential matches against Stefanos Tsitsipas, Karen Khachanov or Marin Cilic, who he beat in last year's final, also on the horizon.

"You start breaking it down point by point, set by set, day by day.

"You try and simplify your preparations rather than looking too far ahead. I hope to defend my title because that has to be the goal but I am really trying not to put too much pressure on myself."

The 20-time Grand Slam champion gave an emotional interview with CNN earlier this week where he spoke of his deep well of feeling for his former coach Peter Carter.

Federer teared up when asked what the Australian, who died in a car accident in 2002, would think of his achievements in the game and specifically his haul at the majors.

Much of why he has managed to enjoy a resurgence in form over the past two years is because of how he has evolved his game to become an even more aggressive and dynamic presence on court.

Since Federer's fifth Australian Open triumph in 2017, the Grand Slams have been won by just himself, Novak Djokovic and Rafael Nadal - rivals who have pushed him to reach continued lofty heights.

"[Novak] challenged me time and time again. I played him in his absolute prime when he was virtually unbeatable," he added.

"It was important not to get frustrated by it and that it was just maybe a moment in time. I have always enjoyed my matches against Novak - even at the beginning when he was coming up.

"We are both naturally attacking players and because of that we have very aggressive points. I like that about our matches with him.

"No doubt about it, he is one of those players, next to [Rafael] Nadal, [Lleyton] Hewitt and others that have really made me re-think my game sometimes.

"I have always wanted to play more attacking tennis. The racket switch is one that allowed me to be more aggressive on the backhand side.

"That is what maybe won me the Australian Open two years ago against Rafa. I like playing attacking tennis - it is how I started my play. I guess I have come full circle again."

Despite acknowledging the impact Djokovic and Nadal have both played in his career, the Swiss stressed his undiminished hunger and desire over the years have been what has enabled him to remain such a presence at the elite of the game.

I love tennis - always have and I try to remind myself that this was my dream to become a tennis player and not that it became a job.

He said: "I don't think I needed them to push me to be quite honest. My goal was always to play for as long as possible because I have a lot of passion for this sport.

"I love tennis - always have and I try to remind myself that this was my dream to become a tennis player and not that it became a job.

"That is why I am able to show so much enthusiasm for tennis. When I saw Andre Agassi, Ken Rosewall, Jimmy Connors play for a long time, I thought that was so cool that they played through so many generations.

Federer has already won a title this season, albeit at the exhibition Hopman Cup, and the former world No 1 admits he arrives at the season's opening Grand Slam in buoyant mood.

"I was seeking confirmation that my level of play was good. In practice [during] the off-season I felt great," Federer, who first won in Melbourne in 2014, said.

"I didn't miss any sessions in terms of fitness or on the tennis court. When I went to Perth [for the Hopman Cup] I was feeling good but you never know if it is going to translate into victories onto the court.

"I played great in singles and in mixed. It was a great event - I played some great tennis against [Alexander] Zverev."

Nobody knows how long Federer has left in the game but while he remains physically fit enough to compete and his desire remains intact, he will continue to challenge for the sport's main honours.

Even with Djokovic and Nadal still formidable opponents and the growing emerging talent making their mark it should be no shock for Federer to lift the Norman Brookes trophy on Arthur Ashe Stadium later this month.

Doing so will only further enhance his standing in the game.