Cameron Norrie prevails 3-6 7-5 2-6 6-3 7-5 over David Goffin to reach Wimbledon semi-finals for the first time; British No 1 will now face defending champion Novak Djokovic in the semi-finals on Friday

British No 1 Cameron Norrie has reached the semi-finals of Wimbledon for the first time after an epic five-set victory over David Goffin.

The 26-year-old prevailed 3-6 7-5 2-6 6-3 7-5 to set up a semi-final clash with defending champion Novak Djokovic, who rallied from two sets down to beat Jannik Sinner in five sets earlier on Tuesday.

Norrie joins Andy Murray, Tim Henman and Roger Taylor as the only British men to reach the semi-finals in men's singles at the All England Club in the Open Era.

Against Goffin, the British No 1 produced a gutsy performance as he found a way to unlock his game following a slow start to the three-hour and 28-minute contest.

He fed off the energy of the crowd on No 1 Court and showed nerves of steel to serve the match out at the first time of asking.

"I'm so happy to get through with such a great team, a great family and great friends here," Norrie said on court.

"It wasn't going my way from the beginning, I wasn't feeling good or feeling the ball and that's all credit to David. I couldn't find my game but thanks to you guys [the crowd], I managed to stay as patient as I could.

"It was all just adrenaline, I just used my legs at the end and tried to put the ball in the court. It was great to get over the line, for sure."

Djokovic into Wimbledon semi-finals after five-set scare vs Sinner

Novak Djokovic is through to the semi-finals of Wimbledon after coming from two sets down to beat Jannik Sinner 5-7 2-6 6-3 6-2 6-2 on Centre Court.

Norrie will now take on Djokovic in the semi-finals, with the world No 1 aiming to secure a fourth successive title at the Championships.

The two players have met just once previously on Tour at the 2021 Nitto ATP finals and on that occasion Djokovic won in straight sets 6-2 6-1.

This has been a week of firsts for Norrie, though and he is already excited about the prospect of what's to come.

"I'm going to enjoy that [against Djokovic]," he said. "Take it to him and hopefully you guys can get behind me again. I'm looking forward to it."

Norrie may be the British No 1 but he started this Championships under the radar slightly, certainly in comparison to Andy Murray and Emma Raducanu.

But, he had plenty to point towards a deep run occurring, having won titles consistently on the ATP Tour and working to improve his overall game and fitness.

Norrie overcame Steve Johnson of the USA to tick off a long-standing goal of reaching the fourth round of a major for the first time. The 26-year-old then impressed against Tommy Paul 6-4 7-5 6-4 to rubber stamp his achievement.

On No 1 Court, nerves looked to take hold of Norrie at the start of his quarter-final. As he said himself, he could not find his game and it took him a good few sets to get going.

Goffin, a former top-10 player who is returning again after being plagued by injury, used his experience to hit through the ball and remain cool.

For the first three sets - despite Norrie taking the second 7-5 - the Belgian played cleaner and more effective tennis. Meanwhile, Norrie's biggest weapon - his forehand - wasn't anywhere to be seen.

But Norrie remained in touch and gave himself a fighting chance. Then, in the fourth set, it clicked and he continued to bring the No 1 Court crowd into the match.

As Goffin felt the impact of his four-hour and 36-minute fourth-round contest, Norrie used his own fitness to get stronger and stronger.

After sending it to a decider, the British No 1 left it late to orchestrate a final break, but he did so in the nick of time at 5-5 and to love.

Norrie then did not panic being reeled back from 0-30 to 30-30 and then again to deuce, on his final service game. Instead, the British No 1 increased the pressure on Goffin again and roared when victory was confirmed.

Norrie to Sky Sports: I can't describe it

Cameron Norrie speaking in an exclusive one-to-one with Sky Sports after victory...

"Not had too much time for it to sink in, but it was just a crazy day, and to do it in the way that I did in five sets, coming back from two-sets-to-one, I can't really describe it.

"Just a lot of emotions, and a pretty sick match to get through. 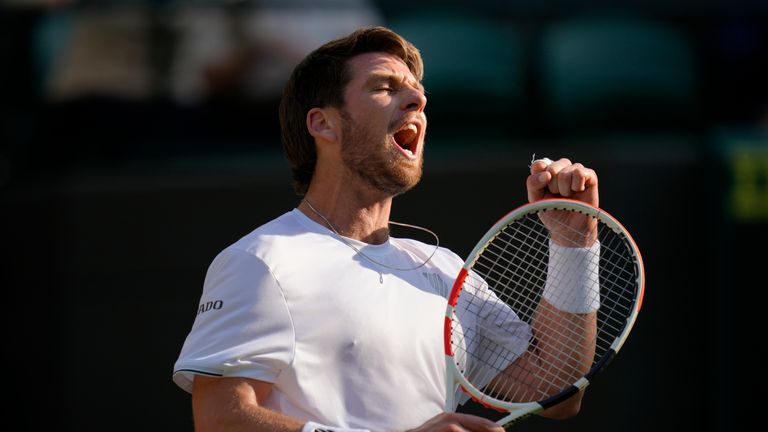 Cameron Norrie faces Novak Djokovic in the semi-finals at Wimbledon on Friday after coming through five sets to beat David Goffin in the quarters.

"Credit to David, he came out firing, he was moving the forehand around and being very accurate with his forehand and I think it zapped my energy a little bit.

"I was lucky enough to steal the second set and that gave me a little bit of time to still be in the match.

"I lost a little bit of focus in that third set, but from then on I was tough as nails and able to concentrate a little bit better. I made it physical and made it really tough.

"I managed my serve very well in that fifth set, and I played a very good game to break at 5-5.

"I definitely used it [the crowd's energy]. I took me a little bit too much time to use that, and at the end of the fourth set they got me through.

"The whole of Court 1 was heaving, it was firing, and the atmosphere was off the chart in that fifth set with everyone behind me.

"Even that little difference was the difference today, and it could have been the crowd. I definitely used it to my advantage, especially coming out to serve for the match.

"I'm just glad they [Norrie's parents] got to witness it and they definitely deserve a glass of wine each."

Norrie pleased with big points | Work still to do

After cooling down and seeing his family, Norrie reflected further on the biggest win of his career at a Grand Slam and how well his opponent had started on No 1 Court.

"David did a good job of hushing the crowd," Norrie said.

"He was playing at such a high level and really giving me nothing. At the end of the fourth, I got the crowd involved and from then on, they were behind me for every point. It frustrated him a little bit and maybe, that was the difference today.

"I actually saw a stat that he won more points than I did, which shows that I played the bigger points better than him" Norrie continued. "That's something I've been working on a lot, so that's nice to do it in the biggest match of my career."

Despite Djokovic's nine-year unbeaten run on Centre Court, Norrie is ready to confront the world No 1 head on.

"It's one of the toughest tasks in tennis [playing Novak]," Norrie said. "Grass is his favourite surface and his record is unbelievable here at Wimbledon.

"I'm looking forward to taking it to him and seeing the level that be brings. He's obviously feeling pretty good coming back from two sets to love. It's going to be a tricky one!"

Join us for coverage from the All England Club with our daily live blog through skysports.com/tennis our Twitter account @skysportstennis & Sky Sports - on the go! Available to download now on - iPhone & iPad and Android