London Spirit looked set to break their duck in The Hundred but slipped to defeat to Southern Brave at Lord's due to visitors' tight bowling and spectacular fielding; Chris Jordan and Quinton de Kock produce moments of brilliance for Brave - but not so Chris Wood for Spirit... 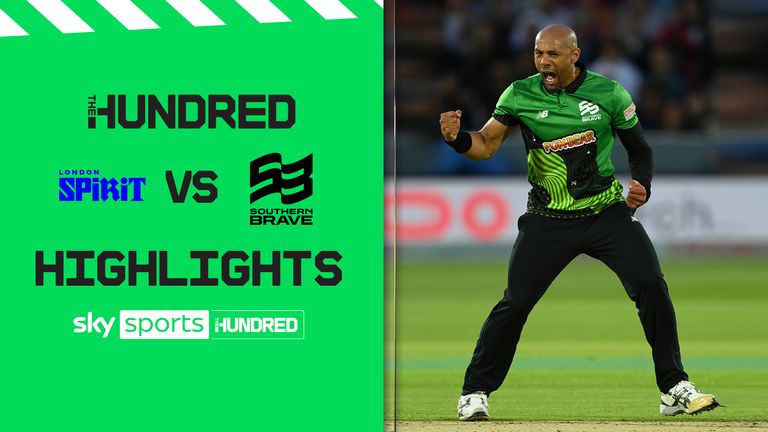 Poor old London Spirit! They looked almost certain to chalk up their first win in The Hundred - but ended up losing to Southern Brave amid some brilliant bowling and spectacular fielding...

It looked set to be London Spirit winning their first game at the fourth time of asking, with the home side requiring only 31 from 30 balls at Lord's on Sunday evening.

Thrilling finish, with De Kock running out Cullen penultimate ball & Amir unable to hit a boundary off the last! 💥

However, Eoin Morgan's men - who prop up the table - eventually made only 141 from their 100 deliveries in reply to Brave's 145, with tight bowling and top-notch fielding scuppering their run chase.

Tymal Mills and Chris Jordan led the way with the ball, conceding only four and 10 runs respectively from their final 10 deliveries, while Brave wicketkeeper Quinton de Kock took an outrageous one-handed catch to dismiss Josh Inglis (55 from 43) and then ran out Blake Cullen from the penultimate delivery. 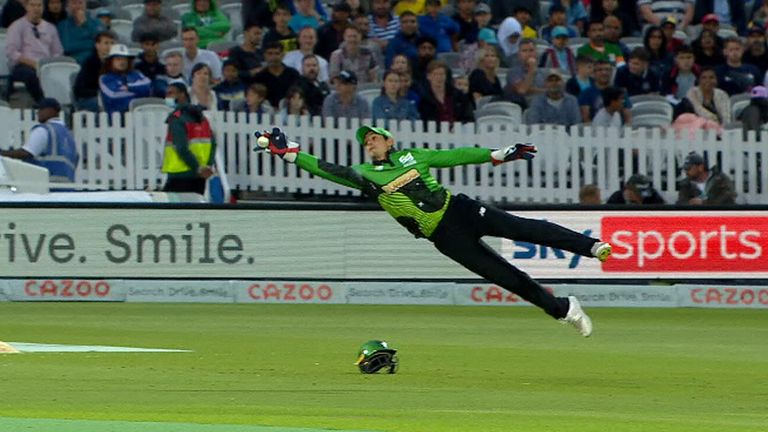 Mohammad Amir needed a six off Jordan's final ball to win the game and four to tie but could not score even one as Brave celebrated a heist and Spirit succumbed to another defeat - Jordan keeping his cool having begun his final five balls with Spirit needing 11.

Yes, Eoin Morgan's run was incredibly risky but take nothing away from Jordan, who added another piece of extraordinary fielding to his scrapbook by running out his England captain for five.

Morgan clipped Mills to mid-off and set off for a single but was well short of his ground as Jordan completed a direct hit at the non-striker's end having thrown the ball under-arm while in mid-air with one stump to aim at. Morgan really should have known not to take on CJ's arm!

Chris Jordan is arguably the best fielder in the world - and he shows all his skills here to run out Eoin Morgan with a sensational direct hit! 👏👏👏

Jordan was then involved in another stunning piece of fielding. He was the bowler whom Inglis tried to ramp down the leg-side late in the game - only to be sent packing as Brave wicketkeeper De Kock pulled off an astounding one-handed grab leaping to his right. Sensational stuff!

Plenty of glovemen fired with the bat in this game.

Brave's Alex Davies was dropped on four (more on that mad moment in a minute) and went on to punish Spirit by scoring 50 off 40 balls as he mixed electric running between the wickets - Kumar Sangakkara suggesting he could give new 100m Olympic champion Marcell Jacobs a run for his money - with inventive boundaries.

Davies is making Wood pay for dropping him on four...#LondonSpirit 🔵 | #SouthernBrave 🟢 | #TheHundred 💯

Davies is not actually keeping wicket for Brave, with that role taken, quite brilliantly as it turned out, by De Kock, who himself impressed at the top of the order with 27 off 14 balls, including an exquisite six off Amir.

Then, for Spirit, wicketkeeper Adam Rossington got the run chase off to a flying start with 45 from 21 balls, with the burly right-hander taking Colin de Grandhomme's first set of five balls for a whopping 23.

Inglis, another wicketkeeping option for Spirit, also played a swashbuckling knock up top and looked poised to lead London to victory, before he fell victim to De Kock's brilliant catch.

Inglis completes his half-century by pulling Garton into the stands...#LondonSpirit 🔵 are hot favourites here...#TheHundred 💯 #SouthernBrave 🟢

HOW HAS HE DROPPED THAT?

I said we'd get to this... Kevin Pietersen's groan said it all after Spirit seamer Chris Wood spilled an "absolute sitter" at deep fine leg.

Davies had dropped his bat as he swung hard at Blake Cullen and ballooned to Wood. It seemed certain that his innings would come to an end on four - but the fielder somehow grassed the opportunity, denying Cullen a second wicket in his set of 10 - he had dismissed De Kock with his first ball - and costing Spirit another 46 runs.

The hosts did not have coach Shane Warne in the dugout with the legendary Australia spinner self-isolating after returning a positive lateral flow test. Spirit throwing away a victory is unlikely to make him feel any better.

London Spirit captain Eoin Morgan: "If you watch the games that have been played so far, every single one has been really tight. You're never out of the game at all - that's been one of the entertaining factors of 100-ball cricket.

"The further you go without winning games, the harder it is to break it. We've been slow starters and we haven't had a lot of luck in the tournament so far but I believe we can turn it around."

Southern Brave's Alex Davies: "I felt someone needed to take responsibility, soak up as many balls as possible and get us to a respectable total

"We didn't hit our straps in the first two games but with this being a shorter format the margins are even smaller and we're starting to find our feet.

"If we can get on a roll, who knows what could happen? If we get the runs on the board, this bowling attack can do the rest for us."

We remain in the capital for Monday's clashes as Oval Invincibles welcome Welsh Fire to The Kia Oval.