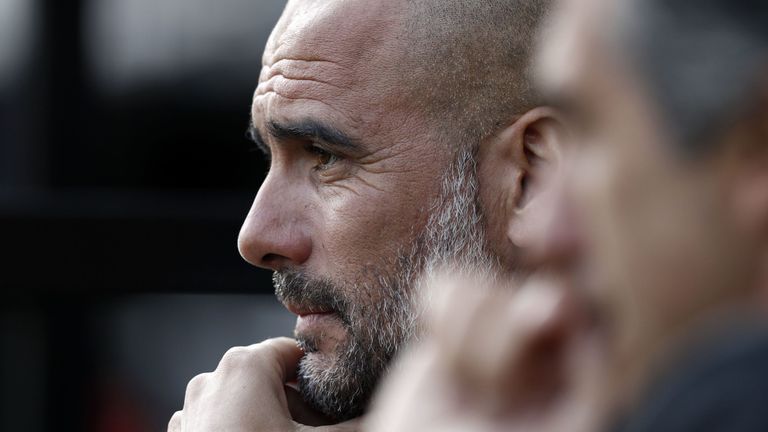 Manchester City were beaten 1-0 by Spurs in a pulsating Champions League tie at the Tottenham Hotspur Stadium. Was Pep Guardiola guilty of overthinking his team selection again?

Sergio Aguero stood with his hands on his hips in front of the giant south stand. The Tottenham supporters behind the goal were still seething from the VAR decision to award Manchester City's penalty, but a few seconds later they were celebrating wildly. Aguero sent his spot-kick to Hugo Lloris' left but the Frenchman was equal to it.

It was a turning point which allowed Tottenham to go on and claim their victory, with Heung-Min Son scoring his second goal in as many games at their new stadium. For Manchester City, though, the inquest will focus not on Aguero's early penalty miss but on Pep Guardiola's team selection.

The Catalan has a history of springing surprises in this competition. The problem is that they rarely seem to end well.

In the 2014 semi-finals, his Bayern Munich side were famously thrashed by Real Madrid when he used an unfamiliar 4-2-4 formation at the Allianz Arena. At Anfield last year, his decision to field four central midfielders backfired as Liverpool inflicted a similarly emphatic defeat. 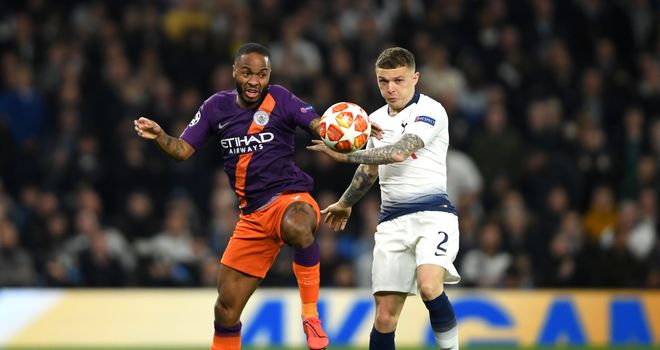 Raheem Sterling battles for the ball with Kieran Trippier

Guardiola's side are still in a position to turn this particular tie around in the second leg. City have, after all, won nine of their last 12 home games by a margin of at least two goals. But their supporters are entitled to wonder whether their prospects would be brighter if Guardiola had not opted to switch things up again.

No De Bruyne or Sane

This time, the changes centred not on the system but on personnel. Bernardo Silva's absence could be explained by the muscle injury he had picked up in training, but the reasons for leaving Kevin De Bruyne and Leroy Sane on the bench were more difficult to understand.

De Bruyne had been showing signs of getting back to his best following his return from injury. There was a goal - his first since January - in the 2-0 win over Cardiff last week, and he followed that up with the assist for Gabriel Jesus' winner against Brighton in Saturday's FA Cup semi-final. He was even afforded a rest by his early substitution in that game. 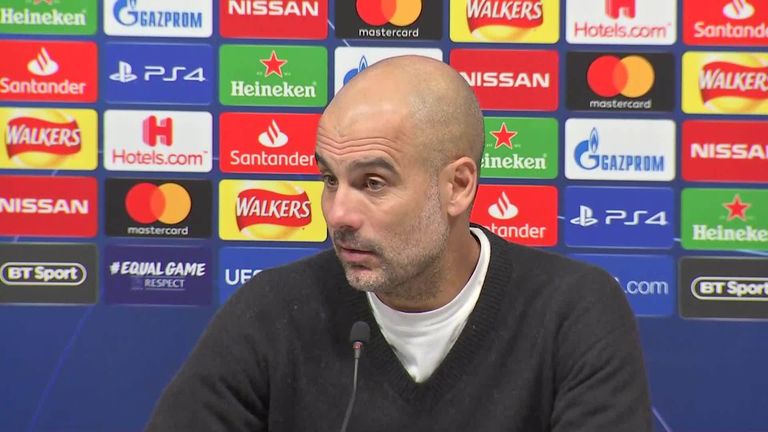 Sane's omission was similarly curious. The German also scored in the win over Cardiff and seemed primed to start against Spurs having been an unused substitute against Brighton. But while Ilkay Gundogan was preferred to De Bruyne in midfield, Riyad Mahrez got the nod on City's right.

The former Leicester man did little to justify his inclusion. While Raheem Sterling tore into Kieran Trippier on the left, Mahrez was more tentative. He was pushed off the ball too easily and rarely threatened to beat his man. In fact, the statistics showed he only made one successful dribble to Sterling's five. Would Sane not have offered greater pace and penetration?

De Bruyne was missed, too. Guardiola said in his post-match press conference that he had opted for Gundogan and Fernandinho as they offered greater defensive solidity, but with David Silva struggling to get a grip on the game in the No 10 role - and despite City enjoying nearly 60 per cent of the possession - the visitors lacked creativity.

Aguero suffered due to the lack of service, touching the ball just 18 times in total, and it was the same story for his eventual replacement Jesus. City simply could not get the ball to them. Fernandinho, Silva and Gundogan completed 139 passes between them, according to Opta, but amazingly only four of them found Aguero and Jesus. 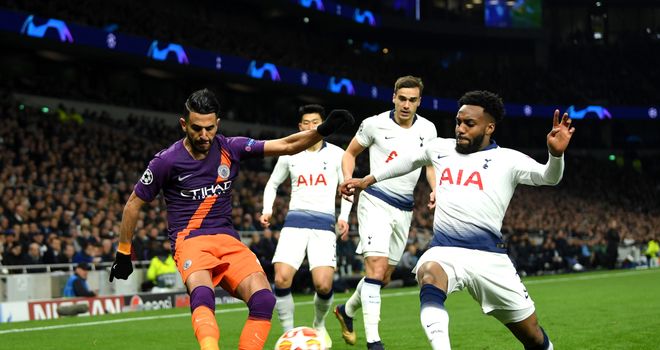 Riyad Mahrez struggled to make an impact for Manchester City

Their passing lacked penetration and consequently they created just three scoring chances between them. For context, De Bruyne created twice that number in his last Premier League start alone.

Even more surprising than Guardiola's initial selection, though, was the decision not to throw on De Bruyne or Sane until the 89th minute. Son's goal had arrived 11 minutes earlier, when there was still time for City to salvage a draw, but instead the problems persisted. By the time the changes were made, hope was already running out.

There was a big surprise at the other end of the pitch, too. Guardiola's options at left-back were admittedly depleted by Benjamin Mendy and Oleksander Zinchenko's injuries, but it was still strange to see him start a game of such magnitude with Fabian Delph in the position.

The 29-year-old has impressed at times since being drafted into the role last season, but he had only started two games since December and those were against Burton and Swansea. At Tottenham's vociferous new arena, he looked uncomfortable and off-the-pace throughout.

Indeed, it was his defensive lapse which allowed Son to dribble back into a shooting position in the build-up to the Tottenham goal.

The left-back's brief was not an attacking one, so would Guardiola have been better off moving Aymeric Laporte there and drafting one of John Stones or Vincent Kompany into central defence?

It is just another question for Guardiola to answer. This defeat is not the disaster of last year's loss to Liverpool or Bayern Munich's 2014 thrashing by Real Madrid. In fact, it comes down to erring on the side of caution rather than being cavalier. But for Guardiola, missed penalty or not, it still puts another Champions League campaign in doubt.

It also underlines one of his few flaws as a manager. Guardiola has contested 26 Champions League knockout games away from home since the start of his top-level coaching career with Barcelona a decade ago, but has only won six of them, drawing 10 and losing 10. His coaching genius is indisputable, but it is a poor record.

City's quest for the quadruple could now rest on how he responds in next week's second leg at the Etihad Stadium. Will he revert to what he knows works? Or will the temptation to tinker take over again? Most Manchester City supporters will surely hope he opts for the former.