Questions for Arsenal boss Mikel Arteta: Three or four at the back? Should Pierre-Emerick Aubameyang move to the middle? What's happened to Willian? Is Nicolas Pepe the answer? Watch Leeds United vs Arsenal live on Sky Sports Premier League from 4pm; Kick-off 4.30pm 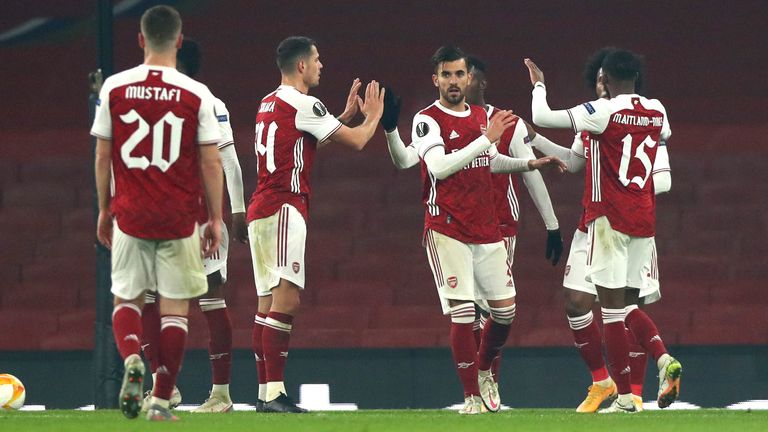 It's been a long international break for Arsenal following their 3-0 humbling at the hands of Aston Villa. Despite recent improvements at the Emirates Stadium there are still plenty of questions for manager Mikel Arteta, but can he find the answers?

Victory at Old Trafford just over two weeks ago was seen as a turning point for Arsenal, but they were brought crashing back down to earth with a bump after Villa's comprehensive win at the Emirates Stadium.

While the Gunners - up until last Sunday - looked reassured at the back, they have struggled to find the correct balance up front and it's hard to know where the goals are going to come from.

They now travel to Leeds United on Super Sunday, live on Sky Sports Premier League and Main Event, and Arteta, who has admitted his side are a long way from the desired level, has plenty of problems to solve. But does he have the answers?

Here we look at five questions facing the Gunners manager ahead of their trip to Elland Road...

Three or four at the back?

There's no doubt Arsenal have become a team that is much more difficult to beat under Arteta.

The Gunners were crying out for structure and stability when he joined the club in December last year and the Spaniard has provided it as victories against Liverpool, Manchester City, Chelsea and Manchester United at the end of last season and the start of the current campaign have shown. They now have a plan when it comes to facing the top sides in the Premier League. 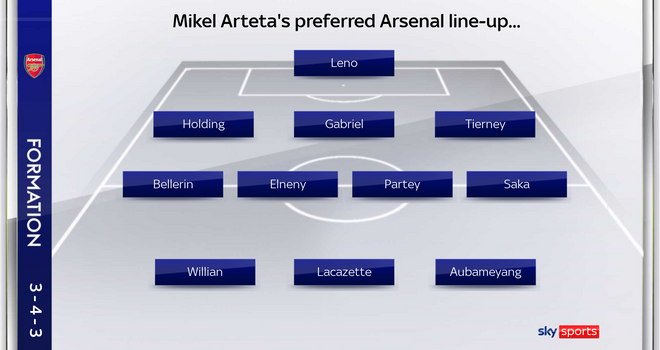 Arteta has preferred using a back three so far this season

Before the 3-0 defeat to Villa, the Gunners, who have conceded 10 goals in the league, had the best defensive record in the Premier League and much of their success and solidity under Arteta has been down to the 3-4-3 formation he favours. However, their creativity has suffered.

Arsenal have scored just nine goals in eight Premier League matches - only five teams have a worse record so far, including the bottom four sides.

Their nine goals are the fewest they have scored at this stage of a league season since 1998-99 (9).

And in their last four Premier League games, they have scored just once - from the penalty spot against Manchester United.

It has led to calls to a switch in formation in a bid to release Arsenal's attacking talent, especially at the Emirates where they have suffered defeats to Leicester and Aston Villa in their last two Premier League fixtures.

"I think it's time for a back four," former captain Tony Adams said. "I've been saying it since the start of the season. It wins you cup games, it doesn't win you league titles. If he wants to build for the future.

"They've got Gabriel now, get him a partnership. They've been unlucky at the start with [Rob] Holding going down but get them into a back four. They look like they have a holding midfielder now who has got a bit of presence and build for the future." Could Arsenal make a change to their formation for the trip to Leeds?

One beneficiary of any switch of formation would be Bukayo Saka. Currently being asked to play in a wing-back role in Arteta's favoured 3-4-3 formation, the England international could put his creative talents to more use on the left side of a front three, just as he did in the second half of Arsenal's 2-1 win over Sheffield United.

The tactical switch to a back four worked wonders that day for the Gunners, who looked much more of a threat going forward, scoring two quickfire goals to beat the Blades, and it's something Arteta is sure to have been looking at over the last two weeks.

A change of role for Auba? How can Arsenal get Pierre-Emerick Aubameyang into the game? That's another question Arteta will have been pondering long and hard during the international break.

So often the Gunners' talisman in recent season, the 31-year-old has scored just two Premier League goals this season, and he failed to register a shot on target in Arsenal's defeat to Villa. In fact, he has registered just 10 shots on target in eight games this season.

Playing on left-wing under Arteta, he has been asked to do more defensive work in an Arsenal which has shown signs of becoming more solid, but for Aubameyang, that has meant a drop in goals and shots per game.

But now, with Arsenal struggling for goals and creativity - and Alexandre Lacazette not providing the answer as a central striker - it's surely time for Arteta to get his main man into the action - and that means moving him into the middle. It's a change former Arsenal forward Paul Merson thinks Arteta should make. "When Aubameyang is out on the wing, he can go 15 minutes without touching the ball. You can't have your star player going that long without touching the ball. How many goals would Jamie Vardy get for Leicester if you played him out on the left wing? Not as many as he gets now, that's for sure.

"Defences are starting to work him out. They are starting to nullify the threat from him from out wide and making life hard for him. They are stopping the cut inside and shot into the far corner. Something has got to change. At the moment, he's not seeing enough of the ball where it matters." 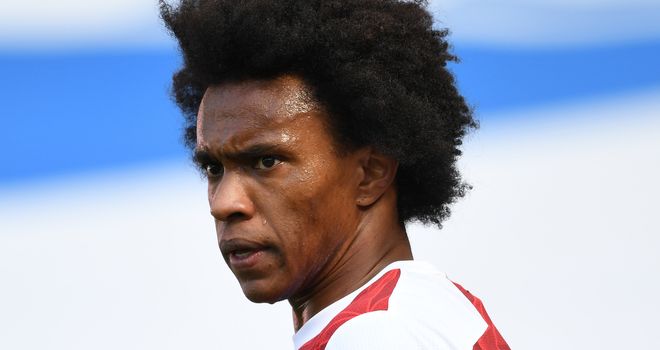 Willian has struggled for form

Three Arsenal goals and two Willian assists on the opening day of the season against Fulham grabbed plenty of headlines. There were questions as to why Chelsea let the Brazilian go and talk of how the Gunners had pulled off the signing of the season.

However, a few months later and Willian's opening day masterclass is a distant memory.

"I think I'm seeing things at the moment," Merson told Sky Sports. "Willian was unbelievable at Chelsea last year. For me, he was probably one of the best Chelsea players. He was phenomenal - an outstanding talent.

"He has gone to Arsenal and he looks lost. They have got to get him performing." Willian's stats so far this season in the Premier League

Willian's struggles have perfectly highlighted Arsenal's lack of cutting edge in the final third. He is yet to score since his switch from Stamford Bridge and hasn't added to his opening day assists. He has only produced five shots, while creating just eight chances in seven Premier League games.

It's not the return Arteta would have been hoping for from the experienced campaigner. More is certainly required and Arteta must find a way to get it from him, otherwise he'll find himself on the bench for the foreseeable future.

Is Pepe the answer? Nicolas Pepe has struggled for game time so far this season

Arsenal's £72m club-record signing has divided plenty of opinions since his arrival from Lille in the summer of 2019.

It's fair to say Arteta remains unconvinced with Pepe, who has started just once in the Premier League this season. 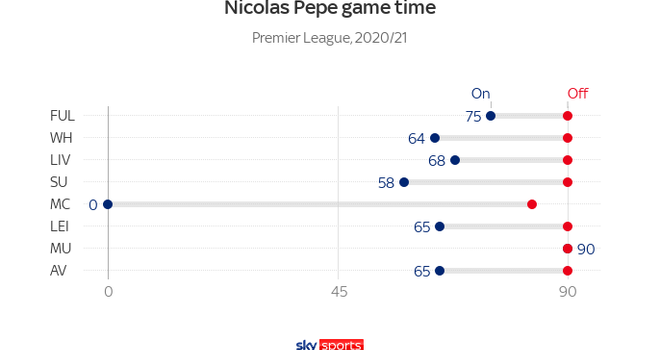 However, when called upon in the Europa League, the 25-year-old has scored twice in three games and provided two assists, but Arteta has called for more consistency.

"It's nothing to do with his attitude," Arteta said following Arsenal's recent win over Dundalk. "He's a player who takes risks, a very creative player - that's the most difficult thing in football, when the opposition know what you can do, how much they want to prevent the space, and creating situations from that is complicated. "But sometimes it's the simple things, the deliveries, the amount of situations he is able to create or attract and then make the right decision to keep evolving that phase of play. For example, the finishing, the position inside the box, he has to be more consistent at it."

However, the players in front of him aren't performing. Lacazette and Willian are struggling, while Aubameyang is going through somewhat of a barren spell by his own standards.

Now might just be the right time for Arteta to let Pepe off the leash in the Premier League.

Time for Joe to shine? 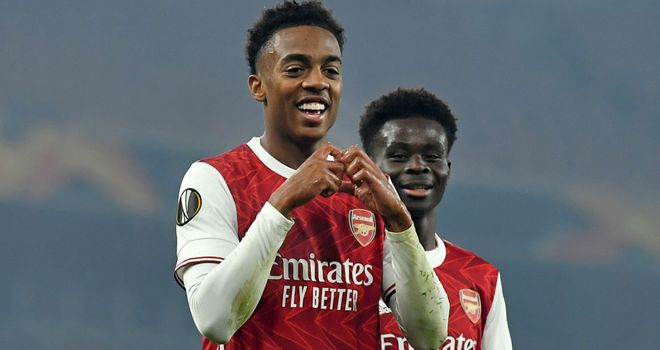 Another player pushing hard for inclusion is midfielder Joe Willock.

The 21-year-old, who has drawn comparisons to former Gunners midfielder Aaron Ramsey, has been excellent in the Europa League this season, producing two man-of-the-match displays in the wins over Dundalk and Molde.

Full of energy and running, Willock continually popped up in goal scoring positions in both games and he showed a calmness in front of goal too, scoring in both games. So, what more does he have to do to force his way into Arteta's plans?

"Keep doing what he's doing consistently, and his chance will arrive," was Arteta's response following his impressive showing against Molde, but it hasn't yet led to any game time in the Premier League.

However, he's done all the right things when called upon and following Arsenal's dismal showing against Villa, Willock, who offers Arsenal something very different from midfield, could be rewarded when the Premier League resumes.