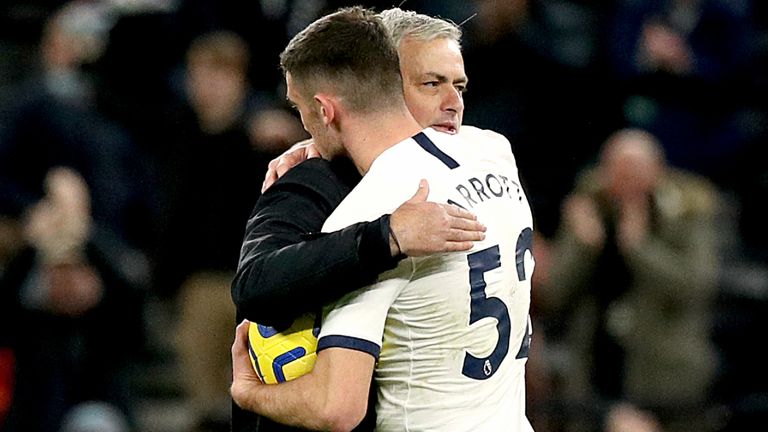 Jose Mourinho says he will not make big changes to the Tottenham squad in the summer transfer window but accepts he does need to "make it better".

Spurs are seventh in the Premier League but are currently without first-choice striker Harry Kane, who is recovering from a hamstring injury, and Heung-Min Son, who will be quarantined as a precaution against the coronavirus when he returns from South Korea after undergoing treatment for a broken arm.

Those absences - combined with a 3-2 home defeat to Wolves in their previous game - have led to calls from some supporters for the club to add to their playing staff when the transfer window reopens in the summer.

Mourinho accepts some alterations need to be made but has no plans for an overhaul of the playing staff he inherited from Mauricio Pochettino in November.

"Year after year after year it's more difficult so I'm not thinking about an overhaul at the moment. But of course we need to make our squad better." Harry Kane remains on the Spurs sidelines with a hamstring injury

The absences of Kane and Son have led to growing calls to give youngster Troy Parrott more game time, but while Mourinho revealed the teenager will be on the bench for Wednesday's FA Cup tie against Norwich City, he still requires more development before he can be considered for the first team on a regular basis.

"He has a lot to learn," he said. "He has qualities, he has potential but he is not the end product. He has things he needs to develop at every level.

"But he's going to be on the bench tomorrow again and he has already played twice in the Premier League, which is something that is not very normal for an 18-year-old kid.

"That is a privilege for him and I think he understands that privilege and the privilege of being around experienced players and the good coaches and very good people in the first team and the academy. It's step by step."