Aaron Long was named MLS Defender of the Year for 2018

New York Red Bulls centre-back Aaron Long is hopeful he will receive a work permit to join West Ham before the transfer window closes on Thursday.

Long, the MLS Defender of the Year for 2018, has a £4m release clause in his contract and wants to move to the Premier League.

West Ham are keen to sign Long but are yet to secure a work permit for the 26-year-old as he has not made the required number of international appearances for the United States.

Long has played in six of the USA's last seven games, including the Gold Cup final defeat to Mexico last month, but he is one cap short of qualifying for a work permit.

The central defender is hopeful the situation can be resolved before the Premier League's transfer window shuts on Thursday.

"As our biggest ally, it seems strange that a football player from the US can't automatically get a work visa to play in England," Long said. 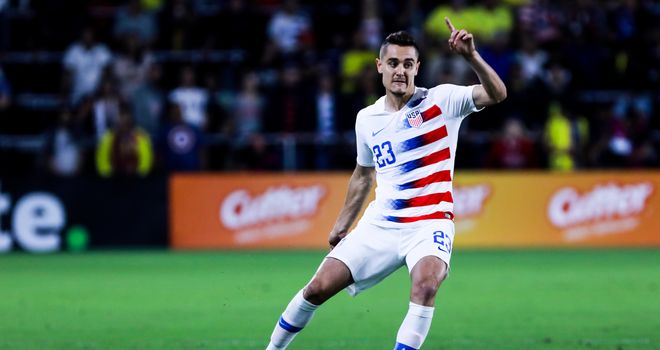 Long has made 11 appearances for the United States

"Every kid in the USA dreams of playing in the English Premier League. Not many players get the chance, so of course I would like to play there someday."

Long says he would also be open to joining RB Leipzig and Red Bull Salzburg this summer, while Marseille, Fiorentina, Rennes and Lyon have also been linked with the American.

"I just signed a new contract, so the decision is up to my club and the other team," he said.

"NY Red Bulls gave me an amazing opportunity, so it would also be a dream to play for RB Leipzig or Red Bull Salzburg, but that won't happen because they only sign players 24 or under."