Chelsea have been monitoring CSKA Moscow striker Fedor Chalov in case they can do January transfer business.

Chelsea owner Roman Abramovich is understood to be a fan of his fellow Russian and the Blues are said to be interested if their transfer ban is overturned next month.

Chelsea expect to find out in mid-December whether their appeal against UEFA's punishment is successful, and, if it is, they are prepared to enter the transfer market in January. 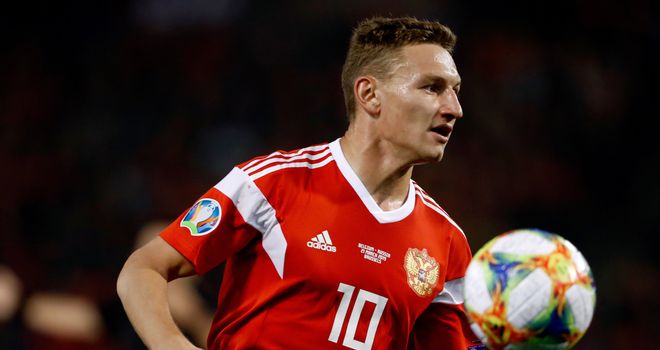 Fedor Chalov is a Russia international with two caps

Crystal Palace also remain interested in Chalov after having a number of bids rejected for the 21-year-old in the summer and are prepared to pay as much as £25m for a new striker in January.

Their final summer offer came on Deadline Day to the sum of £23m and it was knocked back - but a source has told Sky Sports News that CSKA are preparing for his exit during their winter break by searching for a replacement.

Chalov - a Russia international with two caps - came through the youth ranks at CSKA and has scored 32 Russian top-flight goals for them, including five in 16 appearances this term.

Palace are also understood to be keen to sign two new full-backs in January and want to sign players under the age of 23.