Tom Cairney has made 133 appearances for Fulham since arriving at Craven Cottage in 2015.

Fulham midfielder Tom Cairney says it is "an amazing feeling" to have signed a new five-year deal at the club, committing his future to the Cottagers until summer 2024.

The 28-year-old, who arrived on a £2.8m deal from Blackburn four years ago, has scored 26 goals for the west London club during his four-year spell.

Cairney also has the option to extend his contract by a further year. 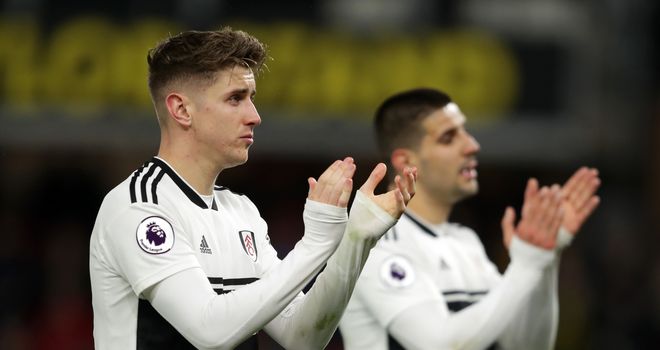 Cairney has made 29 Premier League appearances so far this season

Speaking to fulhamfctv, Cairney said: "The club's been amazing to me, and to extend my contract again is an amazing feeling. I want to stay for a long time, and hopefully finish my career here.

"This place feels like home. I don't think you can put a price on happiness, and your life off the pitch as well, and I can't see myself anywhere else."

Fulham's relegation was confirmed after a 4-1 defeat against Watford at Vicarage Road four weeks ago.

Cairney scored the only goal in Fulham's 2018 Championship play-off final victory against Aston Villa which saw them reach the Premier League.

The central midfielder is eyeing an immediate return to the top flight after featuring 29 times for the Cottagers in the league this term.

"I feel like I've got unfinished business," he added. "I want to stay here and I want to get the club back to the Premier League.

"I want to bounce straight back next season. I know how hard the Championship is, but knowing our owners and how ambitious the club is, I'm sure we'll give it a good go."